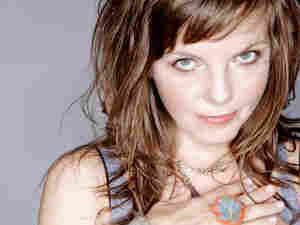 Raised in Sweden and based in New Orleans, Theresa Andersson got her start recording sweet harmonies in her own kitchen. Equally influenced by folk music and Motown, her music quickly attracted the support of her city's icons, Dr. John and Allen Toussaint among them.

Sampling Smokey Johnson's "I Can't Help It" while channeling the bluesy strength of Dusty Springfield, Andersson crafts a bit of a '60s revival in "Birds Fly Away." Handclaps, soda bottles and dulcimers join an arsenal of guitar, violin, drums and tambourine. In concert, she performs without a backing band; instead, she re-creates her lush sound using a two-tiered panel of foot pedals, sampling herself and looping her sounds.

The result is a choreographed dance accompanying each song; unique and spontaneous. By layering one effect atop another, Andersson heightens the anticipation, literally building songs from scratch as she did in her kitchen. In "Birds Fly Away," she draws from many muses at once, and the result sounds like a one-woman wonder.