Accessibility links
Will Obama's FCC Push For Internet Access For All? The Federal Communications Commission has a range of responsibilities, including overseeing emergency communications systems and regulating "wardrobe malfunctions." If the president-elect's advisers are any indication, however, high-speed broadband may soon become the commission's top priority.

Listen
Will Obama's FCC Push For Internet Access For All? 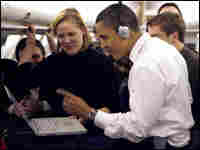 President-elect Barack Obama has not said what the FCC's priorities will be under his administration, but if the people advising him are any indication, Internet access may top the list. Above, he watches a rally video on a laptop in February. Rick Bowmer/AP hide caption

Denmark tops the international list with approximately 40 broadband subscribers per 100 inhabitants. The Netherlands, Norway and Switzerland are close behind. See the whole list here and find additional broadband statistics here.

The Federal Communications Commission has a range of responsibilities, including overseeing emergency communications systems, guiding the transition from analog to digital television and regulating four-letter words on the radio. President-elect Barack Obama has not said whom he'll appoint to lead the FCC under his administration, or what the powerful federal agency's priorities will be. But if the people advising him are any indication, high-speed Internet access may be near the top of the list.

University of Michigan law professor Susan Crawford is one of two people charged with advising the Obama-Biden transition team on the FCC. Crawford declined to be interviewed for this story. But at a roundtable discussion earlier this year, she made it clear that she believes that Americans don't yet have what they need when it comes to Internet access.

"This really is a utility," she said at the Tech Policy Summit in Los Angeles. "This is like water, electricity, sewage systems — something that all Americans need in order to succeed in the modern era."

Another panelist, Richard Russell, the associate director of the White House Office of Science and Technology Policy under President Bush, made it clear that he disagreed.

"The bottom line is that the U.S. is still, I think, the most dynamic broadband economy in the world," he said.

"We're not doing at all well," she said, "for reasons that mostly have to do with the fact that we failed to have a U.S. industrial policy pushing forward high-speed Internet access."

For years, FCC critics have been demanding just this — an official policy on universal Internet access or, at the very least, government incentives to encourage more competition among Internet service providers.

On Capitol Hill on Tuesday, a coalition of organizations unveiled recommendations for a comprehensive national broadband strategy.

Ben Scott, the policy director for one of those groups, the nonprofit Free Press, says Americans are currently paying more for less. Because of that, the U.S. has fallen out of the top 10 countries in the world when it comes to the percentage of households using broadband, Scott says. Just over half of American homes have it, which puts the U.S. behind Denmark, the Netherlands, Norway, Switzerland, Iceland, Sweden, Korea, Finland, Luxembourg, Canada, the United Kingdom, Belgium, France and Germany.

In London, for instance, at least nine Internet providers offer a range of services starting at the equivalent of $10 a month. They can do that, Scott says, because governments abroad have worked with industry to lay wires and equipment that are used by multiple providers. Contrast that with the U.S., where phone and cable companies enjoy a duopoly in most markets.

Joe Waz, a spokesman for Comcast Corp., the nation's largest cable company and second-largest Internet provider, insists there is plenty of competition in the U.S.

"Speeds have kept going up. Prices have stayed flat on a real dollar basis and have continued to decline in terms of the price per megabit delivered," he says.

Waz says his competitors at the phone companies are investing billions of dollars in faster fiber-optic networks. In some places, cable companies are responding by opening up more of their channels to broadband.

High Speed Internet Is Not For Everyone

About 10 percent of Americans still have no access to broadband at all. Many of those people live in rural areas. Wally Bowen, who runs a small Internet company in Asheville, N.C., says the reason is money.

"The cable companies don't find it cost effective. Phone companies have to reconfigure their landlines with additional technology," Bowen says. "There's been some of that, but it's pretty limited."

Bowen and others hope that new wireless technologies recently approved by the FCC will eventually solve the rural broadband problem. But even Comcast's Waz says this is one issue that could benefit from government intervention.

"There are parts of the country where it'll still be uneconomic for a phone company, a cable provider, a wireless provider to offer service. The smart use of government funds — to the extent we care to put them into broadband infrastructure — would be to bring broadband where it isn't."

"We need to be wary of any policy that might scare away capital, especially given the state of the capital markets today. I don't think $100 billion taxpayer program is the right way to go right now," McDowell says.

But Free Press's Scott isn't so sure. There is a precedent for this kind of major public-private partnership in American history, he says.

"I look at this as a real Eisenhower moment," Scott says. "You look back at the 1950s, when the government and the private sector got together and triggered investment in our highway systems. We need to have a similar 21st century highway bill where we invest in our broadband infrastructure."

That information highway won't be easy to build. Scott says such a plan would require unprecedented leadership from the White House, Congress and, most of all, the FCC — because it's likely to face vigorous opposition from cable and telecom companies.