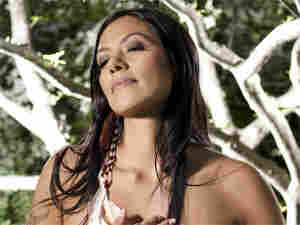 On her latest release, Shake Away, Lila Downs collaborated with her husband and artistic director, Paul Cohen, to explore her mother's indigenous Mexican roots. The resulting folkloric soundscape includes unexpected flashes of blues, country twang and even klezmer music.

In a session with host David Dye, she talks about the frequent relocations that allowed her to pick up such varied musical influences and expounds further on the issues of borders and immigration.

Best known for her work on the Grammy-nominated Frida soundtrack, Downs frequently leaps from one musical boundary to the next. She strings together the pieces of her Mexican and Scottish identities with her Oaxacan and Minnesota upbringing. Though she has toned down the Mexican influence music of her previous works, Shake Away demonstrates a richer and more emotional back-and-forth between her cultural identities and a greater range of flirtation with musical forms.