Accessibility links
Immigration Experts Predict Fewer Workplace Raids As the Obama administration takes shape, many experts are betting it will significantly curtail one of the most visible and controversial facets of the Bush administration's immigration crackdown: the high-profile workplace raids in which federal agents arrest dozens, even hundreds, of undocumented workers.

Demonstrators pressed for immigration reform and protested federal raids during marches around the country on May 1, 2007. At this one, in San Diego, marchers chanted "si, se puede" ("yes, we can"), a theme adopted by Barack Obama's presidential campaign. Sandy Huffaker/Getty Images hide caption 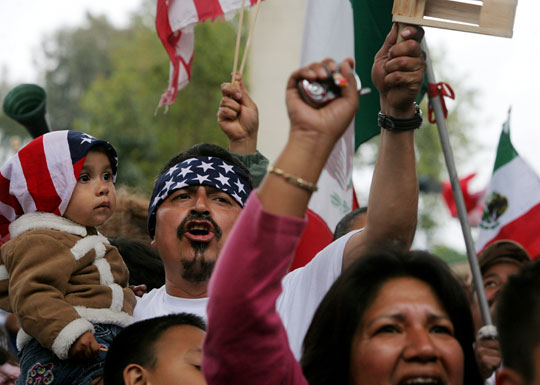 Demonstrators pressed for immigration reform and protested federal raids during marches around the country on May 1, 2007. At this one, in San Diego, marchers chanted "si, se puede" ("yes, we can"), a theme adopted by Barack Obama's presidential campaign. 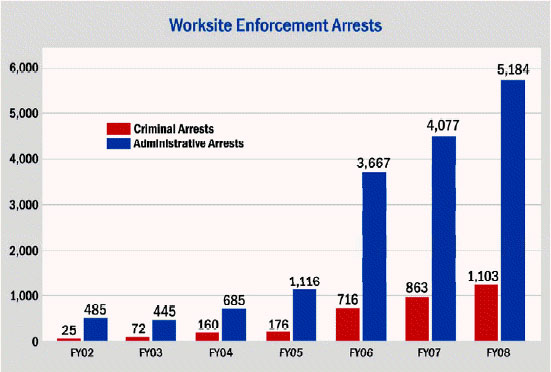 Since 2002, the number of worksite enforcement arrests has increased tenfold.

As the Obama administration takes shape, many experts are betting it will significantly curtail one of the most visible and controversial facets of the Bush administration's immigration crackdown: the high-profile workplace raids in which federal agents arrest dozens, even hundreds, of undocumented workers.

The number of people arrested in such raids has risen tenfold in the past five years, to 6,287 in 2008. Most have been administrative arrests. The biggest raids have made national news, but on any given week, there have been smaller ones across the country. They've targeted a San Francisco Bay Area chain of taquerias, Rhode Island courthouses and a Virginia painting company, to name a few.

As a candidate, Sen. Barack Obama questioned the effectiveness of such tactics in a 2007 interview with The Des Moines Register.

"I'm not particularly impressed with raids on plants that grab a handful of undocumented workers and send them home, leaving the company in a position where it can just hire the next batch," Obama said.

Calls For A Halt On Raids

Since the election, immigrant advocacy groups and Democratic members of Congress have intensified their calls for a moratorium on immigration raids, and House Speaker Nancy Pelosi has talked of finding a way to end them. Luis Gutierrez (D-IL) says the undocumented workers being arrested and deported have millions of family members who are legal residents or U.S. citizens, and he says the effect has been devastating.

"You have single mothers now," Gutierrez says. "You have young, 15-year-old kids with no father. Think about that a moment. And the government took your dad away."

The Bush administration actually spent years pushing to legalize undocumented workers. But when a broad immigration overhaul failed in Congress two years in a row, Homeland Security chief Michael Chertoff dramatically ramped up worksite raids, along with other get-tough measures. In recent months, a number of studies have shown a big drop in illegal migration, and while Chertoff admits the tanking economy played a big role, he credits his agency's crackdown as well.

"This is a direct result of strong, positive enforcement, which is yielding measurable results," he says.

Doris Meissner, a former head of the Immigration and Naturalization Service and now a senior fellow with the Migration Policy Institute, is not convinced.

"I think a lot of what's been going on has been high-visibility disruption for its own sake," she says. "I'm not sure there's a real strategy that's guiding it."

Meissner does not believe President-elect Obama will end worksite raids altogether, but she does foresee a shift in focus to employers, and a far broader approach to holding them accountable. Meissner says basic labor law enforcement has languished for years. She expects an Obama administration to devote more resources to protecting wage and safety standards. She also says leveling the playing field in that manner would go a long way toward weeding out undocumented workers.

Obama also has spoken of the need for a reliable way to check workers' legal status. That has cheered even the staunchest supporters of the current government crackdown, such as Mark Krikorian, executive director of the Center for Immigration Studies.

"Even though I expect the Obama administration is going to dial back on worksite raids," Krikorian says, "I don't think it's a complete disaster, because you're going to see employer-oriented enforcement continuing."

The Department of Homeland Security has aggressively encouraged businesses to consult a federal database to check workers' legal status. It's a program called E-Verify, which DHS promotes in a number of ways, including funding credits on NPR. Soon, DHS also will require large federal contractors to use the program. Mark Krikorian says that could mean up to 20 percent of all new hires in the country will be checked.

"That's a big deal," he says. "I mean, that's starting, at that point, to become a standard labor practice."

On the other hand, critics complain this program's error rate is too high, and some groups want to scrap it as well. That will be one more decision for the Obama administration as it shapes its own immigration policy.