Accessibility links
Yeltsin, Catalyst for Russian Change, Dead at 76 A Kremlin official says former Russian President Boris Yeltsin has died. Yeltsin engineered the final collapse of the Soviet Union and pushed Russia to embrace democracy and a market economy. He was 76. 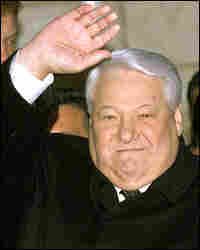 Yeltsin in His Own Words

Yeltsin Announces He Is Quitting Politics: 'I'm Stepping Down Before My Time'

Yeltsin on His Decision to Send Troops to Chechnya: 'Nobody Can Lift the Burden of Responsibility from Me'

Yeltsin on His Failures: 'Forgive Me That I Did Not Live Up to the Hopes of Many'

Former Russian President Boris Yeltsin was, besides much else, a prolific writer, penning three memoirs in his lifetime. The books are, at times, candid and revealing. Read some excerpts. 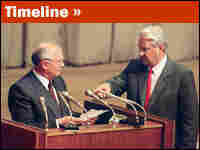 Russia is taking a newly assertive role on the world stage. A five-part series explores President Vladimir Putin's Russia and compares it to the Soviet Union. 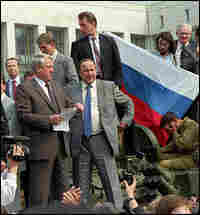 Russian President Boris Yeltsin (left) reads a statement from atop an armored personnel carrier in Moscow in August 1991, as he urged the Russian people to resist a hard-line takeover of the central government. hide caption 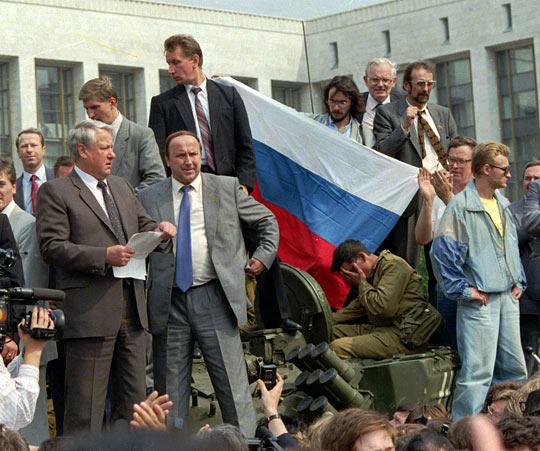 Russian President Boris Yeltsin (left) reads a statement from atop an armored personnel carrier in Moscow in August 1991, as he urged the Russian people to resist a hard-line takeover of the central government.

Former Russian President Boris Yeltsin, who became the country's first democratically elected leader and oversaw the dismantling of the Soviet Union, is dead at the age of 76.

No additional information was given by Kremlin spokesman Alexander Smirnov, who confirmed Yeltsin's death. The Interfax news agency cited an unidentified medical source as saying he had died of heart failure.

Yeltsin, a larger than life figure, leaves behind a mixed legacy. He was a bold reformer who steered the fledgling democracy through its early, turbulent years, and also an unpredictable leader, prone to strange behavior. His critics claim he was a man who was ultimately unable to accomplish his goals. Most Russians will probably remember Yeltsin as the leader who presided over their country's steep decline.

"He had this controversy, this contradiction in him," said biographer Lilia Shevtsova. "He belonged to the past and at the same time he symbolized the future. And of course he was torn between these two alternatives and that's why he was so good at dismantling the Soviet system, so bad at building a new system."

Some images of Boris Yeltsin remain etched in our minds. In August 1991, for example, a vigorous Yeltsin leaps onto a tank after a coup attempt by communist hardliners. Yeltsin tells the cheering crowd that he had been fielding calls from around the world, congratulating Russians for taking a stand for democracy.

Within a few years, though, the world would come to see a different Yeltsin. His drunken bouts became evident, including an incident when he picked up a baton and started conducting a band during a trip to Germany.

Then there were the repeated trips to the hospital, where Yeltsin recovered from heart bypass surgery, pneumonia or, as the Kremlin often claimed, "a simple cold."

One constant in Yeltsin 's life was his keen sense of political drama. He knew how to grab headlines. It was fitting then that he chose the last day of 1999 to tell the world he was quitting politics.

"I am leaving. I'm stepping down before my time," Yeltsin said. "I understand that I have to do this. Russia must enter the new millennium with new politicians, new faces and intelligent, strong and energetic people. Those of us who have been in power for many years must go."

By the time he made this speech, Yeltsin looked much like the old, stiff Soviet leaders of the past. He had trouble speaking and walking. His family and close advisers were accused of taking kickbacks, and he was blamed for allowing a small group of influential oligarchs to rob the country.

Yeltsin built up vast powers, which he handed over to Vladimir Putin in exchange for guarantees that he would never be prosecuted, said Shevtsova.

"He began as a terminator of the Soviet system, he began as a grave digger," said Shevtsova. "But how did he finish? He ended being a helpless, inadequate, pathetic old man, hostage of the close Kremlin entourage and of his own family — a kind of a puppet on the string... a very dramatic and tragic personality."

Yeltsin, a construction boss from the central region of Sverdlovsk, spent much of his early career rising through the ranks of the Communist Party. He moved to Moscow in 1985, but soon fell out with then Soviet leader Mikhail Gorbachev. Yeltsin lost his party rank and went on to enter parliament on a populist platform.

He took the presidency in 1991. By 1993, Yeltsin 's political battle with parliament turned violent. When lawmakers barricaded themselves in parliament, refusing Yeltsin 's attempts to disband the Soviet era body, Yeltsin ordered in the tanks. The White House, as the parliament building was called, was blackened by fire. Scores of protesters died in the violence.

Later, Yeltsin sent troops to quell a separatist movement in Chechnya. The defense minister had predicted a quick victory. But what Yeltsin got instead was a two-year war that Moscow lost. Tens of thousands were killed. Russian troops returned to Chechnya in 1999, just before Yeltsin left office.

In an interview about his memoirs, Yeltsin called Chechnya his biggest mistake. "Of course nobody can lift the burden of responsibility for Chechnya from me," Yeltsin said. "That responsibility, the grief of so many mothers and fathers can't be lifted from my shoulders."

Mindful of his legacy, Yeltsin often tried to highlight his successes, saying he put Russia on a path toward democracy and helped Russia maintain its place in the world. But as he left office, Yeltsin also acknowledged his failures.

"I want to ask your forgiveness for the fact that our dreams didn't come true," Yeltsin said as his presidency came to a close. "Things that seemed simple turned out to be excruciatingly difficult. Forgive me for the fact that I did not live up to the hopes of many, that we could move forward in one fell swoop from a grey, totalitarian, and stagnant past to a bright, rich and civilized future. I myself believed we could."

After retirement, Yeltsin quickly faded from the scene, secluded in his government mansion outside Moscow. Some of his accomplishments also faded fast. The free press he proudly promoted was muzzled, for example, as the Kremlin asserted control over independent television stations.

And without a new legal framework firmly in place it has been easier for Yeltsin's appointed successor, current President Vladimir Putin, to reassert control over the country's resources and civil society. 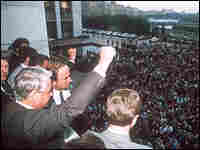 A defiant Russian President Boris Yeltsin (left) clenches a fist before supporters in Moscow, calling on them for a general strike and to resist the pro-communist coup against Soviet President Gorbachev, Aug. 19, 1991. Dima Tanin/AFP/Getty Images hide caption 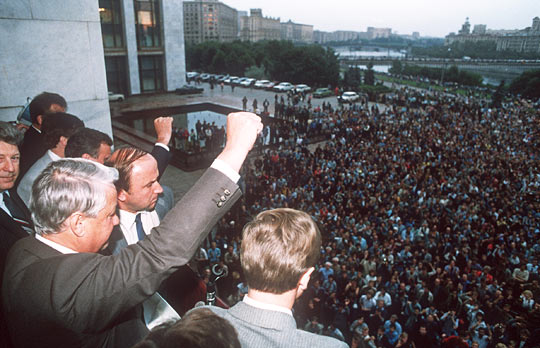 A defiant Russian President Boris Yeltsin (left) clenches a fist before supporters in Moscow, calling on them for a general strike and to resist the pro-communist coup against Soviet President Gorbachev, Aug. 19, 1991. 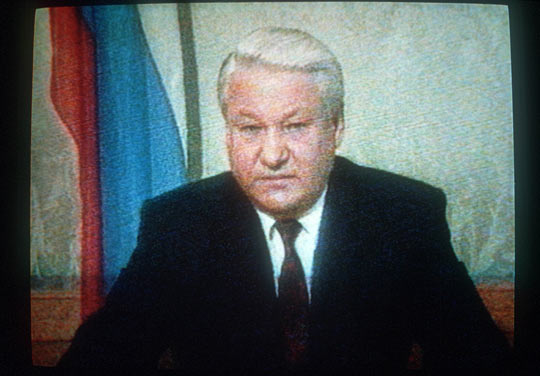 In a televised address, President Boris Yeltsin dissolves the Russian parliament and sets elections in September 1993.

1937: Yeltsin's father is arrested in Josef Stalin's purges for unknown reason. He is later released.

1955: Graduates from Ural Polytechnic Institute and goes to work as a construction engineer in Sverdlovsk, now known by its pre-revolutionary name, Yekaterinburg.

1961: Joins Communist Party at the relatively late age of 30.

1969: Becomes full-time party official in charge of construction in the Sverdlovsk region.

1976: Becomes top party official of Sverdlovsk region, making him the powerful boss of one of the Soviet Union's key industrial areas.

April 1985: Is brought to Moscow by Soviet leader Mikhail Gorbachev, who puts Yeltsin in charge of construction for the entire Soviet Union.

Oct. 21, 1987: Complains at a closed-party Central Committee meeting about the slow pace of economic reforms.

Nov. 11, 1987: Is fired as Moscow party chief and hospitalized with heart problems.

Feb. 18, 1988: Is dropped from Politburo. Gorbachev says Yeltsin would never be allowed back in politics.

March 26, 1989: In stunning comeback, wins election to the Soviet parliament with 89.6 percent of the vote in Moscow.

October 1989: Interior minister tells Soviet lawmakers that Yeltsin showed up at a guard post soaked and bedraggled on Sept. 28 and claimed he had been thrown into the Moscow River by unknown assailants. Yeltsin denies any attack. The incident is not explained.

March 4, 1990: Elected to the Russian Federation's new parliament from his hometown of Sverdlovsk.

May 29, 1990: Elected chairman of the Russian parliament, effectively making him president of Russia.

July 12, 1990: Quits the Communist Party in moment of high drama, walking out of a party congress.

Aug. 18-21, 1991: Defies a coup attempt by hard-liners who put Gorbachev under house arrest, but fail to detain Yeltsin. He climbs atop a tank in front of the Russian parliament building and urges tens of thousands of supporters to defend democracy. The coup collapses, and Yeltsin emerges as the country's most powerful and popular politician.

Dec. 8, 1991: Meets behind Gorbachev's back with the leaders of Belarus and Ukraine. They declare the Soviet Union extinct and agree to form a new Commonwealth of Independent States.

Dec. 25, 1991: Gorbachev resigns and turns over the nuclear codes to Yeltsin, who quickly moves into his Kremlin office.

Jan. 2, 1992: Begins to dismantle 75 years of Communist economics by lifting price controls on most goods. By the end of the year, parliament forces him to slow pace of change and fire reformers.

March 1993: Parliament strips him of many of his presidential powers, reneging on deal to hold referendum on who should wield ultimate power.

April 25, 1993: Wins nationwide referendum on his rule and reforms.

Dec. 17, 1995: Suffers political setback when the Communists win parliamentary elections and hold a majority together with other hard-liners.

Feb. 15, 1996: Says he will seek a second term as president, despite his unpopularity. Starts an energetic campaign pitting him and his reforms against the Communist Party leader, who promises to restore the Soviet Union and its policies.

June 1996: Disappears from public view after months of vigorous campaigning. Aides cite a sore throat; his wife says he has a cold. Months later, doctors say he suffered a mild heart attack.

July 3, 1996: Wins re-election despite being too ill to show up at his polling station.

Jan. 8, 1997: Is hospitalized with double pneumonia shortly after returning to work. He remains away from his office for several weeks.

Nov. 22, 1998: Is hospitalized with pneumonia and a fever, less than a month after entering a sanitarium for treatment of unstable blood pressure and extreme fatigue.

May 15, 1999: Easily survives an impeachment vote in the lower house of parliament.

June 20, 1999: Attends the last day of the Group of Eight summit in Germany on his first trip abroad since an abbreviated trip to Jordan in February for King Hussein's funeral.

Dec. 31, 1999: Stuns Russia and the world by resigning before his term expires in March 2000 and names Vladimir Putin, his prime minister and a former KGB agent, as acting president.

June 12, 2002: Says in an interview that he has no regrets about his role in the breakup of the Soviet Union, calling it necessary "to keep Russia whole."

(Copyright 2007 by The Associated Press. All Rights Reserved.)