Accessibility links
From The Slums Of Shaolin: A Wu-Tang Film From its very first single in 1993, the Wu-Tang Clan brought a hyperactive, slang-driven and wildly popular brand to rap. Now, a new documentary portrays the rise and ongoing struggles of hip-hop's first empire.

Listen
From The Slums Of Shaolin: A Wu-Tang Film 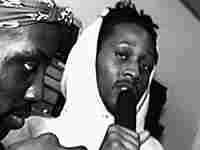 Watch A Clip From 'Wu: The Story Of The Wu-Tang Clan' 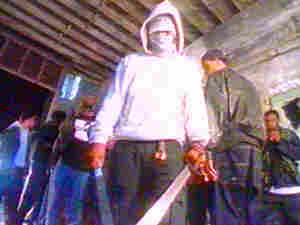 From the very beginning of its first album, the Wu-Tang Clan told us exactly how it planned to hit the hip-hop world.

"Catch the blast of a hype verse / My glock bursts, leave in a hearse, I did worse," Ghostface Killah raps in "Bring da Ruckus," the album's opening track. "I come rough, tough like an elephant tusk / Ya head rush, fly like Egyptian musk."

It was that hyperactive brand of energy that made the Wu-Tang Clan hip-hop's first true empire in the mid-1990s. The rap collective's gritty mix of Staten Island slang and kung-fu film imagery drove fans wild.

Veteran rap critic Bonz Malone worked for Island Records in the early '90s. In a new documentary film, Malone says he doesn't remember RZA being quite so clear about the Wu-Tang Clan in the beginning.

"I gotta be honest," he says, "as much as I love those dudes, I did not understand what the hell they were trying to do at all. That's word up."

Premiered on BET and now out on DVD, Wu: The Story of The Wu-Tang Clan traces the rise, disintegration and ongoing saga of the band.

RZA had stopped by Malone's office to play him the Wu-Tang's first single — a spare, rough-hewn track called "Protect Ya Neck."

"I thought it was incredible," Malone says. "But I remember laughing like hell, and he was telling me, like, Staten Island was Shaolin, and the name of the group is called Wu-Tang Clan, and just what the ideology was. And I was like, 'Who the hell is going to follow that?' "

RZA lifted his ideas from the labyrinthine mythology of kung-fu flicks. Once upon a time, a warrior clan shared the Wu-Tang sword.

RZA's crew would wield its collective rap skills just like that mighty saber. Each of those nine MCs — to continue the metaphor — had his own lyrical "fighting" style. Together, they aimed to parry and thrust their way to the hilt of the hip-hop game.

"Our metaphors [were] new," RZA says. "Our slang was original. You couldn't hear it nowhere else. ... It came from being on Staten Island and being kind of secluded from the other five boroughs and developing our own slang."

That's Staten Island, a.k.a. Shaolin. The whole thing — the vocabulary, the beats and most of the Clan members themselves — came from there. In the pre-Wu-Tang days, many of the young men who would later form the Wu passed through RZA's basement studio to cut their own demo tracks.

RZA was determined to keep making music, even after his brief stint as a solo MC left him bitter about the dark side of the music industry. And, like any kung-fu-monk-obsessed producer would do, RZA meditated daily, conceiving his comeback power move.

Then came his enlightenment.

RZA rallied eight of the tightest young rappers around him — including his cousins the GZA and Ol' Dirty Bastard — and the Wu Tang Clan's war for hip-hop supremacy was on.

"After doing more songs with everybody and having more good times together ... I told everybody in the crew, 'I been in the industry for a few years, and I don't think nobody could f--- with us,' you know what I mean?" RZA says.

In the early '90s, New York hip-hop had taken a back seat to Dr. Dre and Snoop Dogg's West Coast hits. In the Wu film, Raekwon the Chef remembers reclaiming the rap crown for New York City.

"We wasn't thinking about, 'Yo, we gonna take over the world,' " Raekwon says. "It wasn't even that. We just wanted respect in the city. ... We just believed in what we believed in, and we ran with that, and we became this cultural group."

The Wu-Tang Clan bum-rushed microphones and video cameras, going platinum in large part due to the sheer volume of its hip-hop thug theater.

Behind the scenes, RZA negotiated unprecedented deals for the group. Those deals protected the Wu-Tang Clan as a group and allowed each member to have a solo contract with another record company.

"Nobody changed the game the way the Wu-Tang Clan did, because they ... changed it for a whole industry. They changed it for their crew," he says. "To get several record deals, and hold publishing [rights], and still to produce for others — that's straight-up control."

The group's members toured constantly, while its hits banged in clubs and on radio stations nationwide. It set industry trends by turning the massive-rap-posse concept into a lucrative act.

Wu-Tang was also one of the first brands in rap to diversify. The crew burned its famous W-shaped bird insignia on everything: video games, nail polish and especially its own "Wu Wear" clothing line.

Can It All Be So Simple?

But just five years after the Wu-Tang Clan began spreading into a hip-hop empire, it seemed the Wu bird was flying dangerously close to those fiery hot klieg lights.

As members saw their solo brands explode, they wrestled with RZA over which way to divide the spoils. Ol' Dirty Bastard's death — plus a rampant internal beef — slashed creativity, and the Wu-Tang sword went dull.

"It is a typical 'behind the music' story," Watson says. "Childhood friends come together, they form this rap supergroup. Money, drugs, alcohol, egos threaten to break it all apart. And by the time that you guys pull it together, it's like 10 years later, and everyone's moved on."

Most Wu-Tang members have done just that. Method Man is on screen now (The Wackness, the TV show The Wire). So is RZA, starring alongside Denzel Washington in American Gangster.

Everyone is still making music, so you can never rule out a reunion. And amid internal squabbling, the group released an album (8 Diagrams) in 2007 and continues to tour.

But the Wu-Tang Clan already gets enough props for reinventing rap. RZA and his clan reminded the world that hip-hop has always been about much more than beats and rhymes.