Accessibility links
'N.Y. Times' Editor: Good Journalism Is Not Cheap Newspapers that so often tell people what's happening are now facing the question of what will happen to them. Even a paper the size of The New York Times isn't immune. But Editor Bill Keller says his paper is still making a profit, though Wall Street has hammered the company's stock price. 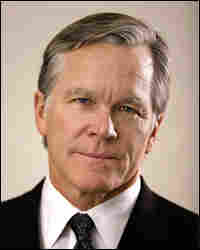 Newspapers that so often tell people what's happening are now facing the question of what will happen to them.

In the teeth of the current recession, more and more companies in the already troubled industry have been forced to cut staff and shrink the size of their publications.

Even a paper the size of The New York Times isn't immune. Bill Keller, the Times' executive editor, says his company's stock price was sliding even before the economic crisis hit. But he tells NPR's Steve Inskeep that his newspaper is still profitable — and when asked to write the headline for his institution at this moment in time, he says it would be this: "We will survive."

The current era of journalism, he says, is "an amazing period of ferment, which is sometimes disheartening because people are nibbling away at our core business." Still, Keller said he doesn't think his newspaper is losing its audience, citing as an example the billion page views that the Times' Web site garnered for the month of October.

"But we're competing for audience with different people," Keller said, adding that the Times sometimes gets "tarred with the condition of the industry that we're in."

"Good journalism does not come cheap. And, therefore, you're not going to find a lot of blogs or nonprofit Web sites that are going to build a Baghdad bureau."

He also noted that "there's a real shortage of the kind of information that I would call quality journalism."

Still, the days when many American cities could support two competing papers are coming to a painful end, Keller says. "A fair number of those newspapers are going to die, and they will be supplanted by something [such as] a local Web site," he said. "I don't think that Americans want to go without news."

Even in an era of short news cycles and multiple media outlets, Keller said his newspaper remains as relevant as ever to politicians and the public, "although it's relevant in a different way and on a different cycle."

"It used to be that a New York Times story out of Washington would set the agenda for the network news for days to come, for the Sunday talk shows and probably for the newsweekly magazine covers the following week," he said. "Now the news cycles through in about 36 hours, instead of a week."

While it's unclear how President-elect Barack Obama's incoming administration will use the Internet and other media, Keller says he expects to see some of the Obama campaign's discipline and message-control.

"But you can't just govern by communicating with your base," Keller said. "And I think the Bush administration has demonstrated that that's true, and I think the Obama people are smart enough to know that."

Asked how open or cooperative the executive branch might be in the next four years, Keller responded: "I think the reporters who covered the campaign would say that it's quite buttoned-down."

He noted how the Obama campaign excelled at using online social-networking tools for fund-raising and building support. But, Keller said, "again, that's something that works to mobilize your base. You need more than your base to govern. And even your most devoted admirers don't want to rely just on you for word of what the government's up to, and what it means."