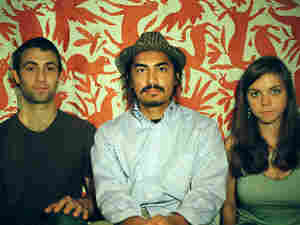 The Low Anthem. Courtesy of the artist hide caption

The Rhode Island band The Low Anthem traffics in pure Americana, crafting roots-rock that sounds unadorned and unmistakably sincere. Click the link above to hear The Low Anthem perform live in concert from WXPN and World Café Live in Philadelphia.

The Low Anthem's own roots are distinctly and appropriately American: Founding members Ben Knox Miller and Jeff Prystowsky met as teammates in the wood-bat summer baseball leagues of rural Connecticut. One thing led to another, and the quartet began self-releasing albums, the third and latest of which is titled Oh My God, Charlie Darwin.

Citing Tom Waits, Neil Young and Bob Dylan as influences, The Low Anthem has honed a folksy, layered sound with a flair for the rustic: The band has been known to forego amplification altogether in order to blend with its surroundings. Oh My God, Charlie Darwin was recorded in a makeshift, secluded studio, then self-released in September.