Accessibility links
Clinic To Disclose Doctors' Industry Ties The Cleveland Clinic is making it easier for the public to find out if its doctors get money from pharmaceutical companies and medical device makers. The move could help patients evaluate whether the doctors are acting in their best interests. 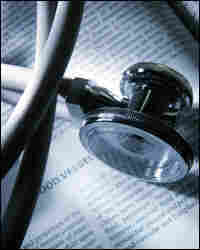 The Cleveland Clinic has begun posting information on the Web that allows patients to see if their doctors are getting money from pharmaceutical companies and medical device makers.

Other medical institutions consider potential conflicts of interest — the Mayo Clinic, for example, oversees industry collaborations — but the Cleveland Clinic's effort is evidently the first such public disclosure of its comprehensiveness.

Officials at the Cleveland Clinic, which is based in Ohio but has several campuses nationally and internationally, say the goal is to be transparent about potential conflicts of interest and let patients judge for themselves. Patients can find out about the financial relationships anonymously, without asking their doctors directly.

Increasingly, some of the nation's most influential researchers and physicians have come under fire for taking money from industry — and letting it influence their scientific judgment about what's best for patients.

But working with medical device makers and pharmaceutical companies isn't necessarily an evil thing. Dr. Toby Cosgrove, the Cleveland Clinic's CEO, says that as the government has limited spending on medical research, it has become increasingly necessary to develop new treatments.

"We need to interact with them because we need their products, and we need them to continually improve," Cosgrove says.

But working with industry can give the appearance of a conflict of interest, especially when doctors and researchers don't disclose all of their financial relationships.

One solution would be to block all interactions between industry and academia. But David Rothman, president of the Institute on Medicine as a Profession, says that while a complete moratorium is not necessary, full disclosure is.

"Patients should want to know the nature of the financial relationship between their physician and industry," he says.

Cleveland Clinic physicians have to run their financial relationships past a board. If those relationships are approved, the clinic posts them on its Web site.

Dr. Steven Nissen's profile is on the site. He heads the department of cardiovascular medicine, and he gets a lot of money for consulting with drug companies. But Nissen doesn't keep the money — instead he has the drug companies send it directly to charities that he and his wife designate. Nissen says he's never been asked about conflicts by a patient.

"Face to face, obviously it would be very difficult for a patient," he says, because patients are in a vulnerable position when they're in a doctor's office. "But they might want to go to the Web and look it up."

Rothman says the current economic recession could bring more interaction between doctors and industry. Doctors and researchers are likely to feel increasingly strapped, he says — as salaries get frozen, and with mortgages and kids' tuitions to pay, they're more apt to consider doing consulting work for industry.

Meanwhile, Sen. Charles Grassley (R-IA) has been actively investigating conflicts of interest. He plans to reintroduce legislation early on in the new Congress that will require all doctors, not just those at the Cleveland Clinic, to disclose money they get from companies that make pharmaceuticals or medical devices.