The seventh of an occasional series called "The Money Map," which looks at how global economic forces are shaping the economies of America's hometowns. 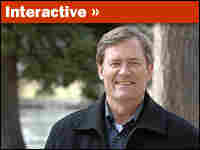 The timber industry has long been an economic driver for the Pacific Northwest. But over the past few decades, it has taken several big hits.

Legal battles between environmentalists and loggers slowed production considerably. The Clinton administration limited the number of logs that could be cut. And now, with the current economic downturn, things are getting worse.

Ethan Lindsey of Oregon Public Broadcasting tells NPR's Steve Inskeep that recent state job reports showed thousands of job losses in the region. Many of the big sawmills in Oregon and Washington state have been forced to close.

Chuck Burley, a timber consultant in Bend, Ore., points out that if houses aren't selling, neither is the wood to build them. "It's becoming very difficult for these sawmills and the companies to continue operating in this environment," Burley says. "The prices they're getting for their finished product is the lowest they've seen in 20 years."

The sluggish housing market, however, isn't the only factor affecting the timber industry. A drop in consumer sales has cut the demand for cardboard. Scott Unger, an engineer at a pulp and paper mill, explains that as people buy fewer gifts this holiday season, there's less demand for cardboard boxes. "That filters down and trickles down to the mills, and that trickles down to the local economies in a lot of these towns."

But, Unger says, the cardboard industry could end up benefiting from rising energy prices. To avoid high gas prices, people might choose to shop online rather than drive to the mall. All that shipping could mean an increase in the demand for boxes.