Accessibility links
Odetta: Legendary Folk Singer Dies At 77 Activist and singer Odetta has died. When you talk to some of the most famous singers in America, they'll tell you she inspired the way they sing. One moment she'd grimace like something was hurting. Then suddenly Odetta would smile. And you'd melt. 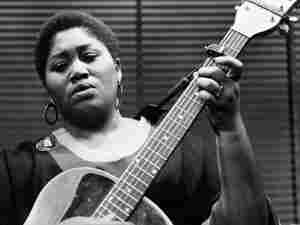 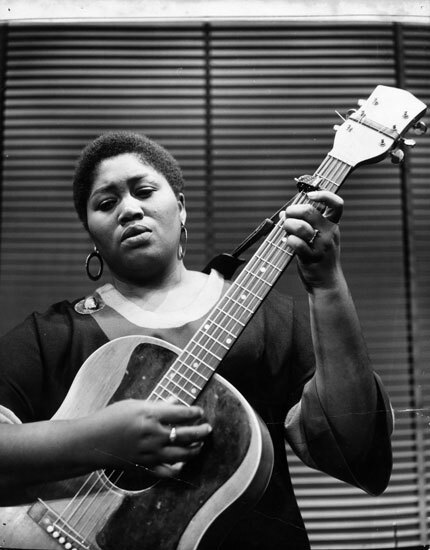 Odetta was often called "The Voice of the Civil Rights Movement."

Activist and singer Odetta has died. She was 77 years old. When you talk to some of the most famous singers in America, they'll tell you she inspired the way they sing. In fact, Bob Dylan once said that the first thing that turned him on to folk singing was Odetta. But Odetta was far more than a folk singer when she died from kidney failure and heart disease yesterday in New York.

The moment you saw and heard Odetta, there was no way you could forget her. She stood on the stage, back in her prime, like a lioness. Strong body. Strong stance. Short, short hair. Big earrings jangling like swords. One moment she'd grimace like something was hurting.

Then suddenly Odetta would smile. And you'd melt.

She was born Odetta Holmes in 1930, in Birmingham. Ala. Those were dark days in the Great Depression. Odetta told NPR a few years ago how her family moved to Los Angeles, hoping life would be better there. But the train ride was a reality check.

"We were on the train when at one point a conductor came back and said that all the colored people had to move out of this car and into another one," Odetta says. "That was my first big wound. That was my big, big wound that this music, I've been able to work through."

Wounds like that helped shape almost everything Odetta did in her music and her life. She studied to be a classical singer in high school with the voice of a coloratura soprano. But then Odetta heard blues in Los Angeles and folk music in San Francisco, and very soon she was performing.

Pete Seeger was already a legend when he heard her for the first time. It was in a friend's living room in 1950.

"We were going around the circle — maybe 15 people there — and a tall, young black woman in the corner hadn't said a word," Seeger says. "It finally came her turn and she sang 'Take This Hammer.' She was astonishingly strong and direct and wanted her songs to help this world get to be a better place."

Baez says, "Nobody came after her and tried to sound like Odetta because it wasn't worth it. They couldn't."

In the 1970s, people began listening to other kinds of music. But Odetta kept performing, even while spending her last few years in a wheelchair. She sang one of her last concerts just this summer, in Albany, N.Y. The local newspaper summed her up with this headline: "A Frail Odetta Is Strong, Sure, Confident."