Accessibility links
Flu On Campus: Avoiding Misery For $20 Every year, about 1 in 4 college students gets the flu. A $20 flu shot can be a cheap insurance policy against aching joints and muscles, high fever, missed classes. But even that isn't enough to motivate some students to get vaccinated, so one health expert is trying an economic argument. 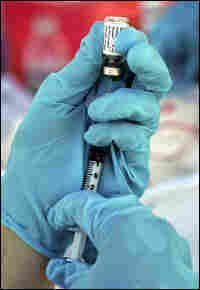 The CDC recommends flu shots for people of all ages with chronic diseases such as asthma and diabetes, and for everybody who has close contact with those in a risk group. David McNew/Getty Images hide caption

Every year, about 1 in 4 college students gets the flu — and one health expert says many arrive on campus not realizing how bad a bout of flu can be.

Even worse, some students each year end up with dangerous cases of bacterial pneumonia that can follow on the heels of the flu. Occasionally, a previously healthy young adult dies. But Doyle says these health risks don't motivate students enough to get a flu shot. So he makes a more economic argument.

But there is a cheap insurance policy against such a devastating loss: a $20 flu shot. Some colleges and universities offer them for free.

A new study in the latest issue of the Archives of Pediatrics and Adolescent Medicine documents the effectiveness of flu vaccination among college students.

Researchers followed more than 12,000 students at the University of Minnesota and St. Olaf's College over four flu seasons. They found that for every two people vaccinated against flu, there was one fewer day of flu or flu-like illness. (The researchers could not determine which illnesses were caused by flu viruses versus other viral infections.)

The new study documents other vaccination benefits that authors say have not been measured before in college students — a much lower risk of missed classes, missed assignments and botched tests.

The study was funded by flu vaccine manufacturers Aventis Pasteur and MedImmune. Study authors say the companies had no role in the design, conduct or interpretation of the study.

"If you get vaccinated, you have a healthier life, you do better in school and you spend less money in clinics," says Dr. Ed Ehlinger, director of student health services at the University of Minnesota and a co-author of the study.

Dr. Lance Rodewald was happy to see the new study — partly because his daughter is a junior at the University of Georgia who didn't think she needed a flu shot. Rodewald heads immunization programs at the Centers for Disease Control and Prevention in Atlanta.

"As soon as I saw this article, I put it in an e-mail and sent it on to her so she could see a really good way to protect herself and make her second semester hopefully disease-free from an influenza standpoint," Rodewald says. He says she now promises to get vaccinated.

Rodewald acknowledges that the CDC currently does not include most college and university students in the age groups recommended for flu shots. "Those who get vaccinated every year should include children over 6 months old and adolescents up to the 19th birthday," he says, "plus those over 50."

In addition to those age categories, the CDC recommends flu shots for people of all ages with chronic diseases such as asthma and diabetes, and for everybody who has close contact with those in a risk group. Rodewald says that sweeps in 285 million people — about 95 percent of the nation's population.

"That leaves very few out," he says. "You have to be leading a fairly isolated life not to have a recommendation for influenza vaccination."

Last flu season, about 110 million Americans got flu shots. This year, up to 146 million doses of flu vaccine will be available.

Rodewald acknowledges that it's easier to convey who should get flu shots on the basis of age than to get across who should get them because they — or someone they have close contact with — falls on a list of health risks.

"It's a complicated message," the CDC official says. "That's one of the driving forces behind widespread interest in a more universal recommendation" — that is, a recommendation that everyone should get an annual flu shot unless there is some specific reason why not, such as taking a drug that suppresses immunity. "But we're really not there yet in terms of the evidence," Rodewald says.

A World Record For Flu Shots

Meanwhile, moved by his new data, Ehlinger is gung-ho on promoting flu shots among the nation's 18 million college and university students. This fall, he challenged the University of Minnesota's 50,000 students to break into Guinness World Records in the category of most flu shots on a single day.

"We immunized 11,810 students, faculty and staff at the University of Minnesota in one big push," Ehlinger says. "We smashed the previous record of about 3,200 in a day."

He used a sales pitch that was partly altruistic. "Our slogan is: 'Do it for the herd.' Do it for yourself, but also get the herd immunity so that you keep it from spreading in your community," Ehlinger says.

If enough of a herd (whether humans or animals) is immunized, the spread of infections can be slowed or halted, protecting even those who weren't vaccinated.

Ehlinger figures this fall's University of Minnesota flu vaccination campaign will prevent something like 5,000 days of illness on campus this flu season. That's nearly 14 years' worth of sick days.