Accessibility links
Raphael Saadiq: Neo-Soul Producer Steps Out : World Cafe It's been a good couple of years for producers like Mark Ronson and Timbaland to step out from the boards and record their own music. Raphael Saadiq has helmed recordings for John Legend and Joss Stone, but just made a standout solo soul album. Hear a session from WXPN. 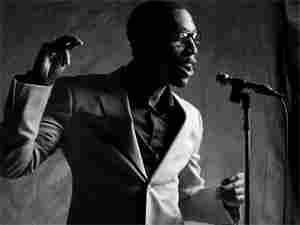 It's been a good couple of years for hip-hop and soul producers to step out from the boards and record their own music. Mark Ronson released the stylish Version and Timbaland put out the interesting, if uneven, Shock Value.

Raphael Saadiq has been in the R&B scene for 20 years as a singer for groups like Tony! Toni! Tone!, but most notably spends his time in the producer's chair. He's helmed recordings for artists such as John Legend, Joss Stone and The Roots. His new solo album, The Way I See It, is an authentic standout within the recent '60s soul resurgence. In this interview, Saadiq discusses his early bonds to The Temptations and the Dick Cavett Show, and reveals the advice he received from Stevie Wonder.