Accessibility links
Sucked Into The Tunnels Beneath Las Vegas Hundreds of people live under the casinos in a hidden matrix of storm drains. Local journalist Matt O'Brien has been exploring those drains for five years. A tour of the tunnels goes through urban art galleries and gritty homes, and includes an introduction to some of the "silver miners" that inhabit this underground skid row.

Listen
Sucked Into The Tunnels Beneath Las Vegas 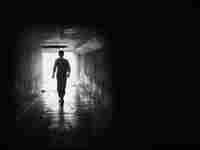 Hundreds of people live in the hidden matrix of tunnels beneath the Las Vegas Strip. Courtesy Danny Mollohan hide caption 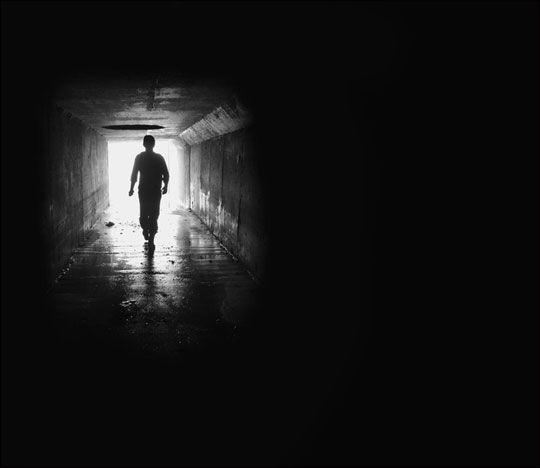 Hundreds of people live in the hidden matrix of tunnels beneath the Las Vegas Strip. 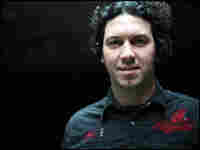 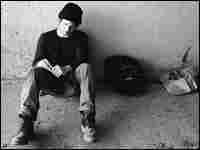 O'Brien finds that despite the grit, the tunnels can be a refuge. Courtesy Danny Mollohan hide caption 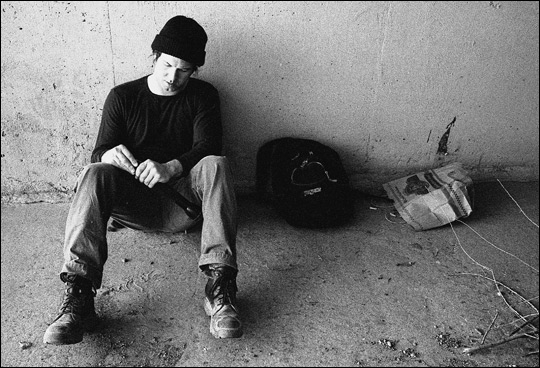 O'Brien finds that despite the grit, the tunnels can be a refuge. 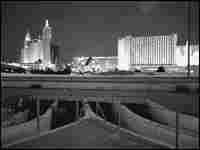 One could easily walk by a tunnel entrance without even considering that there's life below. Courtesy Danny Mollohan hide caption 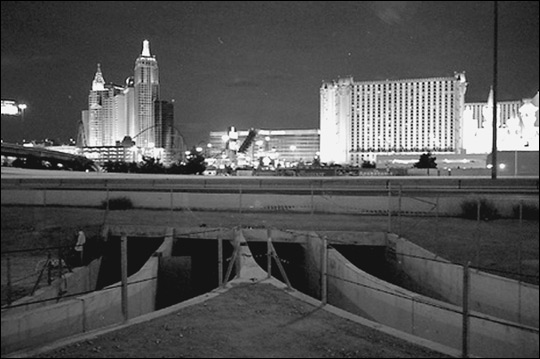 One could easily walk by a tunnel entrance without even considering that there's life below.

It would be easy to go a whole weekend on the Las Vegas Strip without spotting a sign of a crisis. Never mind that more than 14,000 people are living on the streets — and that Nevada ranks second in the nation in homeless population per capita.

Seeing evidence of this is a matter of knowing — or perhaps choosing — where to look.

One might begin with the slot machines on a busy casino floor — tourists, blackjack tables, cocktail waitresses in impossibly tiny outfits. And if one were willing to pay the price of admission, an elevator could transport the seeker to more vice and excess upstairs — rooftop pools and lavish suites. But the homeless still wouldn't be found.

But what if there were an elevator that went downward? Let's say that you could descend below the sunken lounges, past kitchens and utility closets, through layers of concrete. It is here that Las Vegas' truly gritty underbelly can be found; a hidden matrix of tunnels beneath the Strip, another version of the city born out of storm drains.

Matt O'Brien, a Las Vegas writer, has been exploring this underworld for several years. On one particular evening, he's outfitted sort of like a commando, with heavy boots, backpack and an industrial-sized flashlight that could double as a weapon.

No reason to doubt him. In 2007, O'Brien published a book, Beneath the Neon, about the 300 miles of underground tunnels that crisscross beneath the city.

"So, yeah, now we're moving underneath Caesar's Palace. Walking underneath kind of the main property there. This is one of the creepier areas of the storm drain system. Very remote, wet ... extremely dark."

It's after 9 p.m. on a weekday night. The Vegas Strip is bustling above. The stage shows are under way. In the tunnels, there is stale air and utter darkness.

At one point, the tunnel widens to form a chamber. Above is a metal grate and, somewhere beyond that, the sky. The plump, almost illegible cursive of graffiti lettering covers the walls — beautiful colors and designs — that can be seen by flashlight.

"This is one of the underground art galleries that I discovered down in the storm drains. Basically, you walk in about a half-mile in pitch dark, and you have artwork going down the walls that goes down for about a half-mile," O'Brien says.

Ahead, the tunnel devours the flashlight beam. Noises make him stop and shine the light back in the other direction.

O'Brien offers something like reassurance. "There's always the butterflies. There's always that apprehension when you walk into a storm drain. Just because you've been in the drain the day before, that doesn't mean it's going to be the same environment [when you come] down the next day," he says. "I've met people down in the drains — you'll come down the next day, and all of a sudden, you know, they'll tell you to screw off. They'll kind of reach for their shank or their self-defense weapon and make it clear they don't want to talk to you today."

Over the years, O'Brien has met more than a hundred people who live in the tunnels. They're scattered in pockets across the city.

He leads ahead, away from the trickling water, down a side channel that stays dry most of the time. The ceiling gets lower, the corridor narrower and the air becomes stale with the faint scent of body odor and human waste. There's an encampment, a kind of cardboard lean-to.

Soon there are signs of life. The forms of two men show in the glow of candlelight. One of them, with a shag of greasy hair, is slumped on a couch. In front of him, on a makeshift coffee table, are a few hypodermic needles. The other man is better groomed, and wearing a button-down shirt and a decent pair of slacks.

Their names are Brian and Steve. They haven't seen O'Brien since he was down here last Thanksgiving.

Steve talks about how they returned to their camp that day to find O'Brien had left them Thanksgiving dinner. "Big turkey and stuffing. It was pretty good," he says.

Steve is the well-dressed one. He's 42 and grew up in Las Vegas. And he makes his living at casinos around town, doing what's known as "silver mining," which means he looks for credits left behind on slot machines.

"You know, I'll start at Harrah's. And depending on how I feel, I'll go to either the Venetian and the Mirage. A lot depends on how I look, because those are two very hard places. If you don't look right, they'll stop you and watch you. It's always busy at Harrah's, so you're able to walk through the casino without drawing much attention to yourself."

To blend in, they need to dress the part. That explains the rack of button-down shirts and slacks. He shows off his quarters, defined by cardboard walls: a queen-sized bed, a dresser, even a makeshift shower.

"Then I went to the Bellagio. I was walking through and turned the corner in one area of the casino, and there on the machine was $116. Nobody around, so I hit the cash-out button. Took it, cashed it out, and that was the end of my night. Helped me out today. I ate very well today. I had a late breakfast last night. And I still have about 50 bucks left," he says.

But Steve is addicted to methamphetamine and gambling, so holding on to money can be difficult.

"That's what I'm trying not to do is gamble my money away any more. And as far as the drugs, I'm trying to slowly get myself to where I don't crave it. Tonight, I'm taking it easy. I figure I'll just call it an early night and see what I can do tomorrow," he says.

After a while in the Las Vegas storm drains, it's easy to lose one's bearings — to forget that directly above is a very different world. O'Brien is often struck by the contrast.

"You can be in the Hard Rock Casino, which is one of the hipper, kind of younger, richer casinos in town, kind of celebrity-watching people, people watching, betting thousand dollars per hand in a game of blackjack. And right underneath the Hard Rock is one of the worst Skid Rows I've ever seen in my life," he says.

There are broken bottles, hypodermic needles strewn all over the tunnel floor and people passed out.

"And last time I was down there, I actually saw some blankets and teddy bears and stuff, which gave me the impression that a young kid was living down in there with a mom or dad, or both."

That contrast is what keeps O'Brien coming back to the tunnels, long after the book was finished. He brings food and clothing to people like Brian and Steve. And the tunnels have become a kind of refuge for him from the city.

"When work wasn't going all that great, or my relationship with my girlfriend wasn't that great, I would strap on the boots and grab my flashlight, my gear in the trunk. And a lot of times I would just gear up and walk a tunnel. In some ways, there are certain things about underground Vegas that I prefer to aboveground Vegas."

A long tunnel leads out to the dark recesses of a parking structure.

A few more steps, and it's back in a crush of pedestrians on the Las Vegas Strip. O'Brien looks a little out of place, with his dark clothing, knit cap and muddy boots, still clutching that heavy-duty flashlight.

Studying O'Brien, decked out in his tunnel gear, an idea hits: Maybe he should become the official guide to the storm drains. Visitors could explore the underbelly of Las Vegas; they would meet real live human casualties of a city that trades on excess.

Then again, that might just be too much reality in a town that prides itself on artifice. And besides — glancing around at all the tourists, no one's checking out the gutters. They're all looking up, at the flicker and pulse of the lights.

Beneath The Neon Web Site