Accessibility links
The Man Who Predicted The Economic Meltdown As one in a small group of analysts who publicly predicted the collapse of the American financial system, Peter Schiff was a lonely — and much maligned — voice on cable's financial news shows.

Listen
The Man Who Predicted The Economic Meltdown 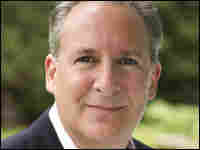 He Called It: Peter Schiff predicted a recession on CNBC in August of 2006.

As one in a small group of analysts who publicly predicted the collapse of the American financial system, Peter Schiff was a lonely — and much maligned — voice on cable's financial news shows.

In August 2006, Schiff, the self-confident president of the Connecticut-based brokerage firm Euro Pacific Capital, warned viewers on CNBC that the U.S. economy would be hampered by "too much consumption and borrowing and not enough production and savings."

"What's going to happen is that the American consumer is basically going to stop consuming and start rebuilding his savings, especially when he sees his home equity evaporate," he said. "And when you have the economy 70 percent consumption, you can't address those imbalances without a recession."

Schiff was even more blunt when speaking on Fox News Channel in December 2006: "You're going to start to see both the government and the lenders re-imposing lending standards and tightening up on credit — and these sky-high real estate prices are going to come crashing back down to earth."

Since then, the economy has played out pretty much exactly the way Schiff said it would.

"Peter Schiff said a year ago on our air the Dow will fall below 10,000," says Liz Claman, an anchor for the year-old Fox Business Network. "Several people on the set scoffed, [but] he was right, as you see today."

Schiff's message of economic gloom made him a popular guest — and whipping boy — on the cable financial shows. CNBC dubbed him "Dr. Doom," and Fox business news anchor Neil Cavuto once joked on-air that he expected Schiff to expose the truth about Santa Claus.

Such verbal roughhousing is common on the cable financial shows, which blend the atmosphere of a high school locker room with an abundance of money talk. Though executives at CNBC and Fox say they try to ensure all sides are heard, Newsweek financial columnist Daniel Gross says it's different for analysts like Schiff who are leery of investing in American markets.

"They would almost be brought on for entertainment value — to be swatted around and laughed at, or ridiculed or otherwise marginalized," Gross says.

He adds that Schiff stands in contrast to the underlying message of the cable shows, which tend to promote buying American stocks.

Schiff says he did hundreds of interviews, and the reception was typically hostile. "People were calling me things like a communist. ... People would roll their eyes at me. You know, they would snicker."

If you had followed Schiff's recommendations in investing, you would have done very well — until this year, that is, when his choices tanked. Schiff had not guessed the dollar would become stronger. But he predicts that will change. And, yes, he has said that on TV.