Accessibility links
D.C. Braces For Record Inauguration Crowds In the District of Columbia, millions are expected to witness Barack Obama being sworn in next month as the nation's first African-American president. One congressional office has developed a reality checklist for those thinking of joining in the surging mass of humanity. 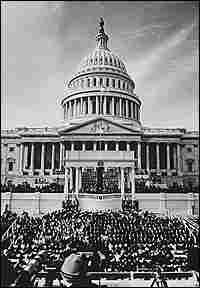 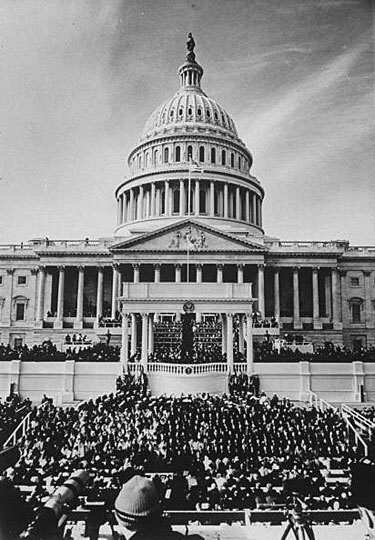 When Lyndon Baines Johnson was sworn in as president in 1965, an estimated 1.2 million people gathered to watch. 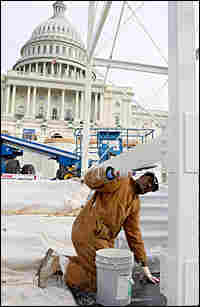 A worker primes the reviewing stand at the U.S. Capitol, where a record crowd is expected to witness Barack Obama's inauguration as the nation's first African-American president. Alex Wong/Getty Images hide caption 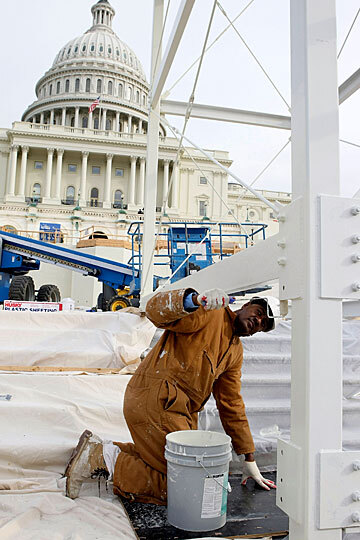 A worker primes the reviewing stand at the U.S. Capitol, where a record crowd is expected to witness Barack Obama's inauguration as the nation's first African-American president.

No one knows just how many people will come to Washington, D.C., for the inauguration of the nation's first African-American president. They're expected to break the record set in 1965, when a crowd of 1.2 million witnessed Lyndon Baines Johnson's swearing-in ceremony. And the prospect of all that surging humanity has created ups and downs for those involved in planning.

Some 4,000 constituents have asked Rep. Steven Rothman (D-NJ) for a ticket to the inauguration. He has exactly 198 to give out.

So this week, his chief of staff, Bob Decheine sent a letter responding to each one. "Let us know if you still want tickets after you read this letter," he wrote. Then he ticked off nine inauguration facts.

The first three aren't so bad: You're probably limited to two tickets each, you have to pick them up in person, and you don't need a ticket to come to the inauguration itself.

Button Up Your Overcoat

Then comes the reality check:

"No. 4. It is likely to be very cold and wet." That's true: The typical midday temperature in January is 37 degrees in the District of Columbia.

The worst-case weather scenario? Dan Tangherlini, the district's city administrator, says he and Metropolitan Police Chief Cathy Lanier had swapped their respective nightmares. His would be "31 degrees and raining, which would generate ice and be a nightmare," Tangherlini says. "She was joking her worst-case scenario would be 60 degrees and sunny. That would have 10 million people here."

Tangherlini says his boss, D.C. Mayor Adrian Fenty, is committed to making this inauguration a success. Planners are still figuring out what that means, from managing thousands of charter buses to planning for medical care.

No Rest For The Weary?

That brings up the next points on Decheine's reality checklist.

"No. 5. Attendees will be outdoors for a very long time."

"No. 6. There will be very limited restroom facilities."

Rep. Eleanor Holmes Norton (D-DC) says she'd like the city to open up buildings in various locations to handle older people whom she believes won't have the stamina to stay on Pennsylvania Avenue or the National Mall. She'd also like to see a ban on cars coming into the city during the inauguration.

The prospect of record crowds flooding into the District makes her happy, but nervous. "What I think you got to do is throw away the old inauguration [playbook]," Norton says.

The inauguration "will go just fine," says Philadelphia Police Commissioner Charles Ramsey, who handled the two most recent inaugurals as the District's police chief. "The people in charge of the planning know what they're doing," he says. "People should just let them do their jobs."

"No. 7. More than 90 percent of the tickets are for standing areas only."

"No. 8. Security delays will be unprecedented."

Decheine jokes, "I should have had a tenth one!"

Decheine says his boss isn't trying to throw a wet blanket on this historic event. He says Rothman just wants to make sure those who come to the inaugural event in person have their eyes wide open.

Decheine's are. He plans to watch the inauguration on TV — from his office on Capitol Hill.