Accessibility links
Gore Group, Industry Butt Heads Over 'Clean Coal' An organization headed by former Vice President Al Gore released a television ad Thursday that takes on so-called clean coal technology. A debate is raging between environmental advocates and industry officials over the technology — and even the definition of the term "clean coal." 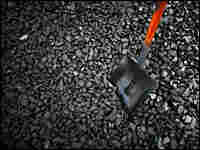 An organization headed by former Vice President Al Gore released a television ad Thursday that takes on so-called clean coal technology — a subject that came up in this year's presidential debates. Although the election is over, the back-and-forth continues over the technology — and even the definition of the term "clean coal."

The idea behind the new commercial from the Alliance for Climate Protection is that clean coal is like the emperor's clothes: It doesn't exist. Gore — the winner of the 2007 Nobel Peace Prize for his work on raising awareness about climate change — tells NPR's Robert Siegel that clean coal technology is not "anywhere close to being a reality."

But Joe Lucas, vice president for communications for the American Coalition for Clean Coal Electricity, begs to differ. He tells Siegel that clean coal refers to a "whole suite of technologies" that have allowed the industry to make great strides toward reducing the environmental footprint of using coal to generate electricity.

Clean coal is an evolutionary term that has expanded over the past 30 years as new technologies became available, Lucas says.

But when it comes to another definition for clean coal — what's known as carbon capture and sequestration, a technology that would allow about 90 percent of the carbon dioxide emitted by coal-burning plants to be captured and stored — Lucas acknowledges that an industrial-scale plant using that technology does not yet exist.

The European consulting firm McKinsey and Co. has studied the technology and concluded that its use could be possible, at least in Europe, by 2030. Gore says that theoretically, it's possible the technology could play a significant role.

But "we cannot continue to have the construction of all these incredibly dirty and dangerous polluting coal plants — which are the principal cause of global warming — proceed on the assumption that this technology ... is going to soon be available," Gore says. "If it can be created, if it can be paid for, if it works, then wonderful. But let's don't pretend that it exists now. It does not."

Gore says it is a responsible move for the U.S. government to contribute research funding to determine whether carbon capture and sequestration technology "could make coal a responsible and safe energy option."

In the meantime, Gore says, the power industry has an incentive to pretend that kind of clean coal technology will soon be a reality: "to stave off the regulation of [carbon dioxide] and the imposition of measures that will sharply reduce the global-warming pollution that is the cause of the climate crisis."

But Lucas says he and Gore would agree that "the ultimate goal is to reach the zero emissions portfolio." And he says that the majority of Americans don't measure by the 90 percent standard for reducing emissions set out in the McKinsey study.

"The fact that we are using technology today to reduce the emissions of hazardous air pollutants, and the fact that we will be able to, over the next 10 years, begin to bring technologies into the marketplace to capture and store carbon, that's what the American people believe that clean coal is," he says.