Accessibility links
John Milton, 400 Years Of 'Justifying God To Man' On the 400th anniversary of the birth of John Milton, fans around the world are celebrating with literary events, exhibits and readings of Milton's famous epic poem, Paradise Lost. 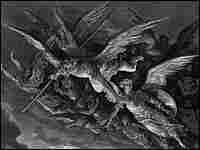 "The Rebel Angels" by Gustave Dore, from his series of engravings for an 1865 edition of Paradise Lost. Gustave Dore/Hulton Archive/Getty Images hide caption 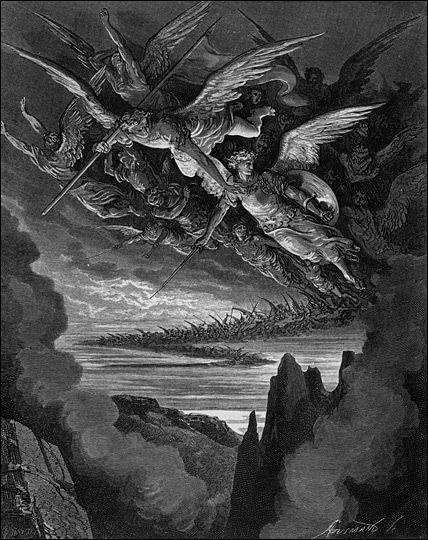 "The Rebel Angels" by Gustave Dore, from his series of engravings for an 1865 edition of Paradise Lost. 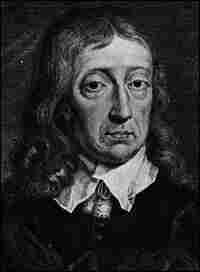 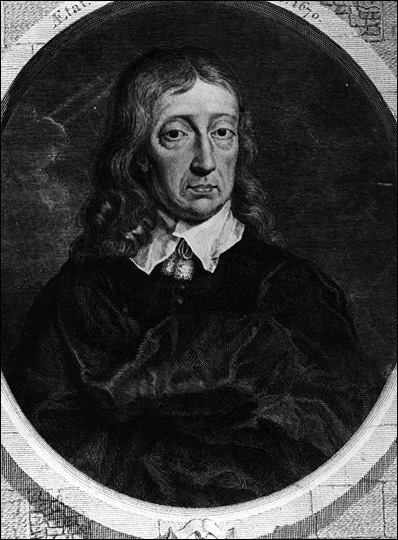 English poet John Milton, in an engraving dated 1660. His epic poem Paradise Lost would be published in 1667. 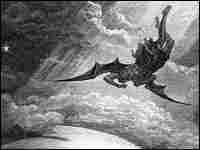 "Fallen Angel" by Gustave Dore, from his series of engravings for an 1865 edition of Paradise Lost. Gustave Dore/Hulton Archive/Getty Images hide caption 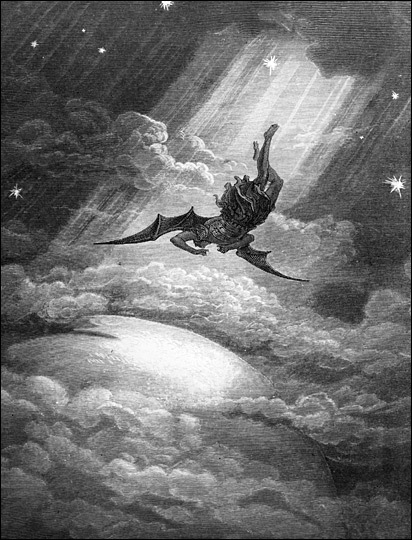 "Fallen Angel" by Gustave Dore, from his series of engravings for an 1865 edition of Paradise Lost.

Dec. 9 marks the 400th anniversary of the birth of John Milton, and fans around the world are celebrating with literary events, exhibits and readings of his epic poem Paradise Lost.

At Cambridge University — where Milton studied at Christ's College — the faculty of the English department reads the entire text of Paradise Lost — all 10,000 lines — in a 12-hour, continuous live Webcast.

In New York City, preservationists at the Morgan Library have disbound a portion of the only handwritten manuscript of the poem that survives from the 1660s and displayed the loose pages in a hushed exhibition space.

Declan Kiely, the curator of the Morgan Library's exhibit, says it's a once-in-a-lifetime display.

"You'll never have another opportunity to see as many openings as there are here," says Kiely. "It's a 33-page manuscript, and you can see eight pages in the exhibition."

"[Milton] was a very great poet, a great mythmaker. He was an interesting man, politically — one of the first European intellectuals to argue in favor of divorce on the grounds of lack of spiritual companionship," says Kerrigan. "He published the first book devoted to censorship. All of this, along with some of the greatest poetry in the history of the world."

Milton's masterpiece, Paradise Lost, is an unrhymed poem in iambic pentameter that chronicles the biblical fall of man and covers creation, the great battle of the angels, original sin and the expulsion of Adam and Eve from the Garden of Eden. Kerrigan calls it the greatest work of its kind in the English language:

"It has great cosmic vistas. It describes gods and monsters," he says. "And the sublimity of its subject matter is matched by the sustained beauty of its language."

At the Morgan Library, Kiely says people have "almost genuflected" in front of this manuscript: "There's a great sense of reverence in the room whenever I visit it," says Kiely. "Last week, we played a recording of the first 26 lines to a group that was visiting, recited by Actor Mark Rylance ... [and] everyone bowed their head as if they were in church."

Paradise Lost is more remarkable for the way it was created: When Milton began writing the poem in 1658, he had been blind for four years. He recited the entire work to an assistant, 40 lines each morning for five years, says William Kerrigan. When the secretary was late, Milton was said to have grumbled around the house, "I want to be milked. I want to be milked."

"So he was, day after day, packet after packet," says Kerrigan. "And we have, as a result, this extraordinarily beautiful poem. It's a great act of human heroism that it was ever created."

A rare first American edition of Paradise Lost is included in the Morgan Library exhibit. It was published in 1777, one year into the American Revolution. Kiely says that Milton opposed the monarchy in England — and that the founding fathers read him.

"His theories of republicanism, of the people's right to overthrow a magistrate, or a king, or any ruler if they were not carrying out the will of the people, was directly influential on the Constitution of this country," says Kiely.

Among other contributions Milton made to our culture are new words: He coined the phrase "self-esteem" in a prose essay, and the hundreds of words in Paradise Lost, including "pandemonium" — which literally means "the place of all the demons."

And Milton, who visited Galileo in 1638, was also the first writer to ever use the word "space," in the sense of "outer space," to consider the infinite scope of the universe. As he wrote in Book 8 of Paradise Lost:

... this earth a spot, a grain,
An atom, with the firmament compared
And all her numbered stars that seem to roll
Space incomprehensible (for such
Their distance argues and their swift return
Diurnal)...

Kerrigan says the best way to read Paradise Lost is in a single sitting, as he did when he was in graduate school.

He set aside 24 hours, loaded up on coffee and snacks, and read the entire manuscript, ending with the expulsion of Adam and Eve from the garden. By the time he got to the final line — "They hand in hand, with wandering steps and slow, / Through Eden took their solitary way" — he had tears streaming down his face.

Though some of the classical and biblical references in Paradise Lost are less familiar to today's readers than they were in earlier centuries, Kerrigan says the story has universal appeal:

"It's a story about losing perfection, coming to take responsibility for that loss and going on despite it. In that sense, it's a very human story, and it touches most lives, I think."

'Better To Reign In Hell'

From Book I of Paradise Lost: Freshly expelled from Heaven, Satan rallies his angels.

Is this the Region, this the Soil, the Clime,
Said then the lost Arch-Angel, this the seat
That we must change for Heav'n, this mournful gloom
For that celestial light? Be it so, since he
Who now is Sovereign can dispose and bid
What shall be right: farthest from him is best
Whom reason hath equald, force hath made supreme
Above his equals. Farewell happy Fields
Where Joy for ever dwells: Hail horrors, hail
Infernal world, and thou profoundest Hell
Receive thy new Possessor: One who brings
A mind not to be chang'd by Place or Time.
The mind is its own place, and in it self
Can make a Heav'n of Hell, a Hell of Heav'n.
What matter where, if I be still the same,
And what I should be, all but less then he
Whom Thunder hath made greater? Here at least
We shall be free; th' Almighty hath not built
Here for his envy, will not drive us hence:
Here we may reign secure, and in my choyce
To reign is worth ambition though in Hell:
Better to reign in Hell, then serve in Heav'n.
But wherefore let we then our faithful friends,
Th' associates and copartners of our loss
Lie thus astonisht on th' oblivious Pool,
And call them not to share with us their part
In this unhappy Mansion, or once more
With rallied Arms to try what may be yet
Regaind in Heav'n, or what more lost in Hell?

Excerpted from "Paradise Lost" in The Complete Poetry and Essential Prose of John Milton edited by Wiliam Kerrigan, John Rumrich, and Stephen M. Fallon. Copyright © 2007. Excerpted by permission of Modern Library, a division of Random House. All rights reserved.

'And Justify The Ways Of God To Men'

From Book I of Paradise Lost: Milton invokes his poetic muse, and states his purpose for the epic

Of man's first disobedience, and the fruit
Of that forbidden tree, whose mortal taste
Brought death into the world, and all our woe,
With loss of Eden, till one greater man
Restore us, and regain the blissful seat,
Sing Heav'nly Muse, that on the secret top
Of Oreb, or of Sinai, didst inspire
That shepherd, who first taught the chosen seed,
In the beginning how the heavens and earth
Rose out of Chaos: or if Sion hill
Delight thee more, and Siloa's brook that flowed
Fast by the oracle of God, I thence
Invoke thy aid to my advent'rous song,
That with no middle flight intends to soar
Above th' Aonian mount, while it pursues
Things unattempted yet in prose or rhyme.
And chiefly thou, O Spirit, that dost prefer
Before all temples th' upright heart and pure,
Instruct me, for thou know'st; thou from the first
Wast present, and with mighty wings outspread
Dove-like sat'st brooding on the vast abyss
And mad'st it pregnant: what in me is dark
Illumine, what is low raise and support,
That to the highth of this great argument
I may assert Eternal Providence,
And justify the ways of God to men.

Excerpted from "Paradise Lost" in The Complete Poetry and Essential Prose of John Milton edited by Wiliam Kerrigan, John Rumrich, and Stephen M. Fallon. Copyright © 2007. Excerpted by permission of Modern Library, a division of Random House. All rights reserved. 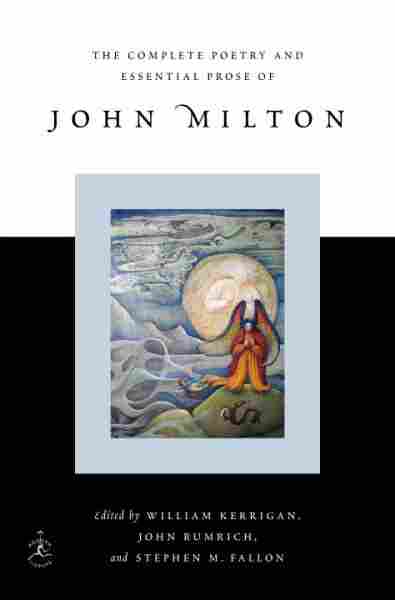 The Complete Poetry and Essential Prose of John Milton