Accessibility links
Moody And Jones' Jazz Reunion Is A 'Delight' On their first recording together in more than 50 years, saxophonist James Moody and pianist Hank Jones show that the elder statesmen of jazz can still play beautifully. Our Delight displays the golden virtues of jazz with warmth and grace.

Listen
Moody And Jones' Jazz Reunion Is A 'Delight' 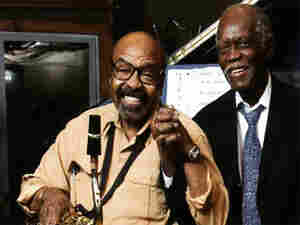 James Moody is a terrific saxophonist, distinctive flutist and sometimes a whimsical singer, but for some reason his considerable charms don't always translate to records. Happily, a new album is an exception: His warmth and grace come through in improvised lines that unfold like a logical argument, except they swing more.

Tadd Dameron's tune, "Our Delight," is also the name of the album Moody co-leads with pianist Hank Jones, though it's obviously Moody's show with bassist Todd Coolman and drummer Adam Nussbaum as the Moody regulars. The repertoire is familiar but strong. Half the tunes are by bebop composers Tadd Dameron and Dizzy Gillespie, Moody's boss off-and-on for decades. The album was recorded a couple of years ago, when Moody was 81 and Jones was 87. You can hear them skip a couple of notes in a fast phrase once in awhile, as on "Eternal Triangle," but they're not coasting.

When people go on about the golden virtues of jazz — elegance of expression, a burnished and beautiful tone, an improviser's accumulated wisdom applied to blues and ballads and bop — this is the sort of music they're talking about. The only misstep on the album is comical: Jimmy Heath's salute to Moody on "Moody's Groove" is gamely sung by Italy's Roberta Gambarini.

The better change-ups are two numbers on which Moody trades in saxophone for flute, an instrument he helped establish in jazz. His sound is unabashedly wispy, but he makes that breathiness expressive and he can really move. His tone sounds oddly like his speaking voice.

The lyric on 1938's "Old Folks" describes a veteran campaigner casting his mind back on long-gone glory days. Moody's playing makes a mockery of that subtext. Lately, jazz has been favored with a number of musicians in their 80s and even 90s who can still play the game. But then, improvising for a living — solving musical problems every day — is a good way to keep the mind and the fingers sharp.