Accessibility links
Tom Jones Still Sings To The Back Rows For more than 40 years, Tom Jones has been strutting his stuff across the stage. Now, at 68, he's got a new album called 24 Hours, his first U.S. studio disc in more than 15 years. It combines big-band sounds with catchy beats, occasionally suggestive lyrics and a booming voice.

Listen
Tom Jones Still Sings To The Back Rows

If He Should Ever Leave You

Give a Little Love 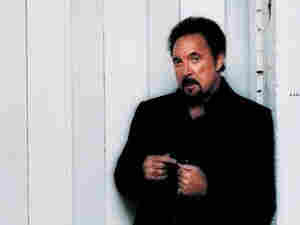 After 40 years of performing, Tom Jones is still strutting his stuff. Courtesy of the artist hide caption

Sir Tom Jones has been making women — and a lot of men, for that matter — scream and sigh for more than 40 years, strutting his stuff across the stage.

Now, at 68, he's got a new album called 24 Hours, his first U.S. studio disc in more than 15 years. It combines big-band sounds with catchy beats, occasionally suggestive lyrics and a voice that can still reach the back rows.

The album's production team, Future Cut, is known for having worked with young British pop stars Estelle, Kate Nash and Lily Allen. The group crafted the album's sound by taking the "essence" of Jones' songs from the '60s and adding a modern sheen.

"They liked a lot of the brass things that I'd done on my early recordings," Jones says. "One of the songs that we recorded now is called 'If He Should Ever Leave You,' which was sampled from a record that I did called 'I'll Never Let You Go.' The brass in the beginning is identical. They wanted to do things like that, which I was all for."

For lyrics, Jones turned to some well-known songwriters, like U2's Bono. The two met up at a nightclub in Dublin, where Jones asked him to pen a song for 24 Hours.

"I asked him, would he write me a song, and he said he would love to, but if he did, he would want it to be about me," Jones says. "He asked me a lot of questions about growing up in Wales, and what did I do before I got into show business."

The song that came out of this conversation, "Sugar Daddy," is full of details about Jones, like the line, "You got to get your hands dirty when you're digging a ditch," which is a reference to Jones' life before he became a performer.

"He liked the way I looked when he was a kid, and he used to see me on television — you know, with the shirt and shoes ... so those things are in there. So information I was giving him, he was using."

From the age of 12 until he was 14, Jones was bedridden with tuberculosis. He says the experience of being so ill changed his outlook on life.

"Sometimes it takes an illness like that to really make you aware that health does not come easy," he says. "I remember there was a lamppost at the end of our street, and I used to see the kids playing around the lamppost there. I used to think to myself, 'My God, when I'm able to walk to that lamppost, I'll never complain about anything again as long as I live.' And I've never forgotten that. It's stuck with me all the time."

After singing on stage for more than 40 years, Jones isn't backing down like a lot of other seasoned pop stars, who release softer, subtler albums as they get older. Jones, like fellow Welsh singer Dame Shirley Bassey, says he still loves to bring out the voice and rattle the pans.

"I think we're very similar, Shirley and myself, because we do project," Jones says. "I think we learned that singing in pubs and clubs in Wales without microphones. You learn to project, and that never really leaves you. We can get tender at times, but still like to belt out songs when they need to be belted out."

Jones' passion for performing shows no signs of disappearing.

We asked our listeners to give us some of their questions for Tom Jones. The first is from Tony K. of Seattle, Wash., who says: "I had the great pleasure of meeting you 19 years ago after a wonderful show at the Paramount Theatre, and you were incredibly gracious. It was a pleasure. My question involves your duet album Reload. I think it's a terrific record and one of my personal favorites. I was wondering what artists you would like to share a microphone with today?"

"There's a bunch of people that are around that I haven't sung with as yet. Whitney Houston, I think, is a great singer. If somebody came up with a good song, I think we could sing it together really well. I like Alicia Keys. I like Duffy, who is a Welsh singer. And Amy Winehouse, if she ever pulls herself together. There's another girl called Adele that is making some noise now in England. There's a lot of good voices around that I think that with the right song — with duets, though, you have to find the song first, and the other person has to really want to do that."

Sandy Spellman from Texarkana, Texas, says, "My husband and I love your new CD, 24 Hours. We have been to several of your concerts, and no matter what mood people are in when they walk in, they always leave with a big smile. What I want to know is, what puts a really big smile on your face?"

"Seeing the people walk out with big smiles on their faces, that's what makes me smile. That's the best part of the day for me, is being on stage. I love to sing, and I love getting across to the people. It's like a giant pat on my back, when they're getting it and they're really digging it. That's what puts a smile on my face."

Ellen Sterling of Las Vegas asks, "I wanted to know if there's a question you wish interviewers would stop asking you, and is there one you've never been asked but would like to answer?"

"Well, yeah, but me bringing it up, you see, would bring it up then. It's the underwear thing that people keep asking me about that I think it's become a joke, and it's not really what I'm all about. That started a long time ago with room keys and things like that. I never thought that my image would overpower my talent. The thing that got me onto the stage to begin with was the sound of my voice. I started selling records before the majority of people knew what I looked like. So it's on the sound that I make, really, not sometimes what happens on stage. I can't think of anything that I would want them to ask me that I haven't already answered."