Accessibility links
Unemployment Hits 15-Year High Unemployment numbers for November are out and they paint a bleak picture. Employers cut 533,000 jobs, putting the unemployment rate at a 15-year high. What does this mean for people who are out of jobs and the rest of the economy?

Unemployment numbers for November are out and they paint a bleak picture. Employers cut 533,000 jobs, putting the unemployment rate at a 15-year high. What does this mean for people who are out of jobs and the rest of the economy?

From the studios of NPR West, this is Day to Day. I'm Madeleine Brand.

And I'm Alex Cohen. Coming up, some of the same companies that brought us the subprime mess are back. This time, they're selling government-backed mortgages. We'll hear why that could cause another housing crisis.

BRAND: But first, it's a clear sign that the recession we're in right now is getting worse. Last month, the economy lost 533,000 jobs. NPR's Chris Arnold is following this. He joins us now. And Chris, you know, we hear these economic numbers all the time, every month this report comes out. How big a deal is this?

CHRIS ARNOLD: Hi, Madeleine. Well, this is a very big deal, and this number is echoing around the world today, and it's not an exaggeration. This is the worst monthly jobs report that we've seen since 1974. I talked to one economist this morning - a very level-headed guy who I talk to a lot - and he said this number is horrible and it's scary, is the way that he described this. And it's not just the 533,000. If you go back, this report took another look at previous reports and revised them, and when you add it all together, the economy's lost almost 2 million jobs, and unemployment is now at 6.7 percent. Some economists say it could easily rise to above 9 percent over the next year.

BRAND: So Chris, how does this compare - this recession - how does it compare to other recessions?

ARNOLD: Well, in the early 1980s, we saw a 10.8-percent unemployment rate, so that would be worse than what some economists are predicting, but that was one of the worst recessions in the entire post-war period, you know, since World War II. And economists say this one could get that bad or worse. I mean, the economy's in this downward spiral rate now, and it's just hard to know where that's going to end.

BRAND: Well, let's talk more about that spiral. The economy keeps losing all these jobs. What's at the root of it?

ARNOLD: Well, there's a lot of causes, but probably the biggest is that before the recession even started, the banking system in this country, and probably the world, was in terrible shape, and money is still not flowing right to a lot of average people or businesses. You know, it's harder to get car loans right now, harder to get mortgages, credit cards, and all that results in less spending by people, and companies, too. I mean, if they can't get a loan, it's harder for them to hire people and you know - so, that results in job cuts. And then you get into this cycle where people get laid off and then there's even less consumer spending, so more people get laid off, and you know, it just continues.

BRAND: Mm-hm. And so what are economists saying is the best way to get out of this?

ARNOLD: Well, if there's any silver lining to this really terrible number that we got today, it's that this number is so bad that the government now probably has to just pull out all the stops and do whatever it can to get the economy recovering here as quickly as it can. And you know, things like - we're talking about a big stimulus package; if there was opposition to that, that's a very tough argument to make now. There won't be any tax increases for sure anytime soon. And the government could do other things. I mean, there's talk of offering 4 and a half percent loans on 30-year, fixed home mortgages for maybe all Americans and, you know, that would put hundreds of extra dollars in a lot of our pockets to go out and spend on the economy. The hope is that some big moves like that might help the economy pull out of its nose dive. 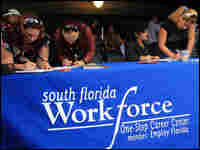 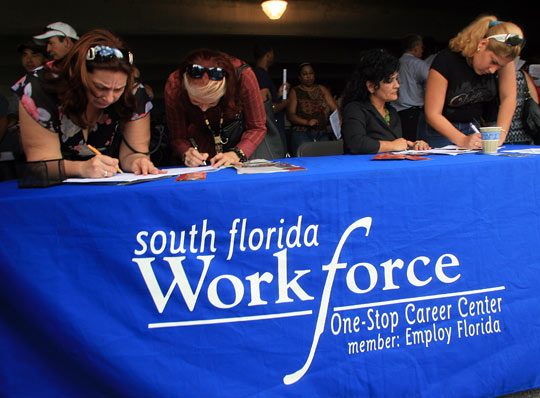 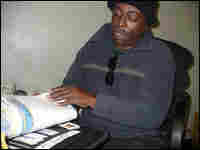 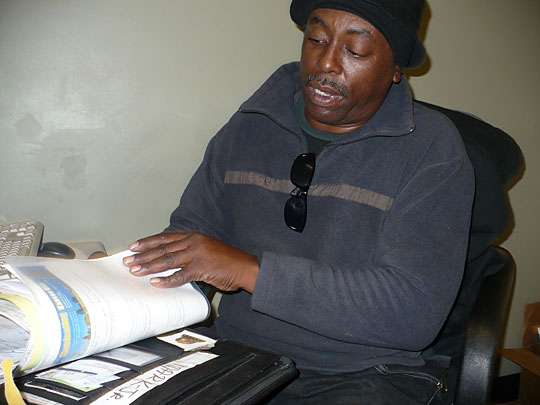 Edward Stewart Jr., 48, looks for a job at an employment center in Kansas City, Mo.

The U.S. economy shed jobs at a blistering pace in November, pushing the overall unemployment rate to 6.7 percent and putting new pressure on federal officials to approve another big stimulus package sometime soon.

Employers cut 533,000 jobs from their payrolls during the month, the worst decline since December 1974 and a much bigger drop than economists had predicted.

Companies also eliminated more jobs than first thought in September and October. That brings total job losses since the recession began in December 2007 to about 2.7 million, according to the Labor Department.

"Today's employment report reflects the difficulties in our economy. It is devastating when Americans lose their jobs, and many are worried about their future job security," said Commerce Secretary Carlos Gutierrez.

"These are really God-awful numbers. The economy's headed downhill and really the brakes are not working," said Sung Won Sohn, professor of economics and finance at California State University, Channel Islands.

Nearly every sector of the employment market lost jobs, including manufacturing (85,000), professional and business services (101,000), and leisure and hospitality (76,000). Unemployment rose for both adult women (5.5 percent) and adult men (6.5 percent).

"Right now I would take anything; I'd go down to $6 or $7 [an hour] just to have a job," says Ray Ross of Nashville, Tenn., who was recently laid off from his job as a security guard. His former employer has put him on call, but he isn't getting much work.

The retail sector lost 91,000 jobs, with auto dealers alone down by 24,000, underscoring the way Detroit's troubles are filtering through the broader economy. The drop comes in a week when officials of the big U.S. automakers are on Capitol Hill seeking financial assistance, and it is likely to make it harder for Congress to turn them down.

As high as it appears, the 6.7 percent unemployment rate actually underestimates the number of people hurt by the declining jobs market, because it doesn't include people who have given up searching for work or part-timers who would like to work full time, Sohn said. The report says more than 400,000 people left the labor market this year because they believe no jobs are available, he said.

Forty-eight-year-old Edward Stewart Jr., of Kansas City, Mo., has been subsisting on day jobs and occasional temporary gigs, but he would prefer to work a full week.

"Right now, I'm searching the Web and trying to make some phone calls and trying to get some work for like a janitorial service maybe, whatever comes up," he says.

In addition, the Labor Department estimates that about 600,000 workers have simply stopped looking for jobs, up from about 259,000 a year ago.

When these two groups are included, the effective unemployment rate is actually much higher than it appears, about 12.5 percent, Sohn says.

November's big drop puts new pressure on the incoming Obama administration and Congress to approve an economic stimulus package as quickly as possible. The president-elect has talked about a plan to create 2.5 million new jobs, at least in part by funneling money to the states to pay for large infrastructure projects.

"The jobs picture painted today is staggering, and it should be all the evidence Washington needs to act swiftly and decisively to shore up this economy," said Sen. Charles Schumer (D-NY).

Bush administration officials tried to sound a more optimistic note, saying the financial rescue package put into place by the Treasury Department would ultimately help the job market. U.S. officials have taken a number of steps to try to stabilize the financial system, such as buying stock in major banks and guaranteeing certain kinds of securities.

"it's going to take time for all the actions we've taken to have their full impact, but I am confident that the steps we're taking will help fix the problems in our economy and return it to strength," said President Bush, meeting with reporters at the White House today.

"My administration is committed to ensuring that our economy succeeds, and I know that the incoming administration shares the same commitment," he added.

The gloominess of the report sent stock prices down sharply early in the day, but they later rebounded. The Dow Jones industrial average rose by 259 points, finishing at 8635.