Accessibility links
Cholera Crisis Compounds Zimbabwe's Woes The government appealed for outside help this week in combating a cholera outbreak that has claimed close to 600 lives since August. The disease is symptomatic of the general collapse of infrastructure and services in Zimbabwe, including the breakdown of its public health system. 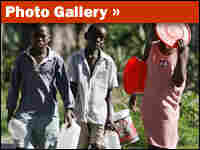 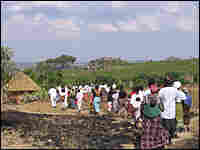 The funeral procession for Roki led up the mountain to the burial site. Ofeibea Quist-Arcton/NPR hide caption 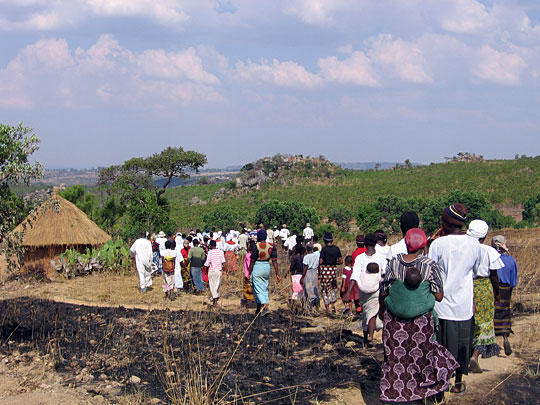 The funeral procession for Roki led up the mountain to the burial site. 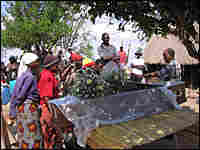 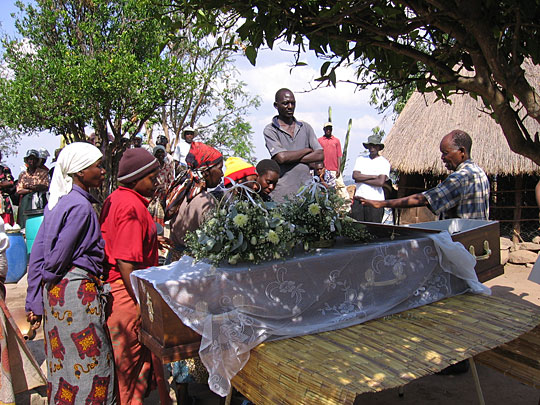 Mourners pay respect at the coffin of Tendai Roki, who died from cholera. 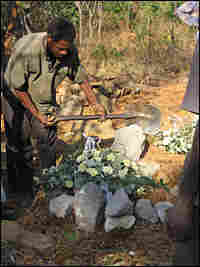 Roki, who worked as a driver in South Africa, died of Cholera. He was buried in Goromonzi, Zimbabwe. Ofeibea Quist-Arcton/NPR hide caption 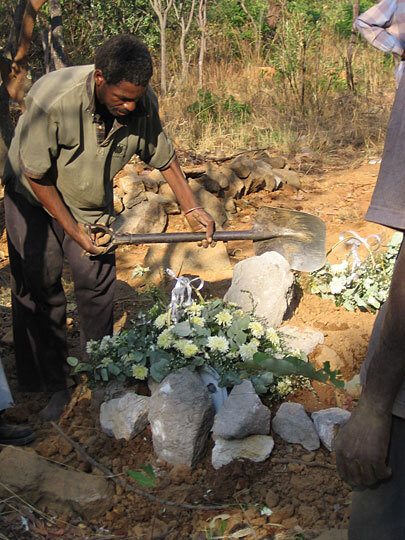 Roki, who worked as a driver in South Africa, died of Cholera. He was buried in Goromonzi, Zimbabwe.

As a cholera outbreak grips Zimbabwe, the government has declared a national emergency — even though just last week, the deputy health minister said the situation was under control.

The disease is symptomatic of the general collapse of infrastructure and services in Zimbabwe, including the breakdown of its public health system. The United Nations has reported close to 600 deaths and almost 13,000 people infected with cholera, which has spread across Zimbabwe's borders.

One of the dead was Tendai Roki, 29, the breadwinner for his family. The anguished wailing of his young widow rises above plaintive voices as his funeral procession winds its way slowly up a mountain path. The mourners are heading toward a spot high on the hill, shaded by matamba trees and giant boulders — it's a burial ground for this community near Goromonzi.

Roki worked as a driver in South Africa, but was back home in Zimbabwe visiting his wife, Prisca, and their 6-year-old daughter. His mother-in-law, Winnie Umire, said Roki had been in the capital Harare for only a couple of days when tragedy struck.

"My daughter's husband is dead," Umire says. "Cholera. He was attacked with cholera for some hours. Three hours, more than four hours — that's what attacked him. Now I don't know what to do — what God will make us to do. It's very hard for us. We don't know what to do because he was arranging to take his wife to go to South Africa."

A Health System In Shambles

Roki is among hundreds who have died since August. The authorities belatedly acknowledged the cholera outbreak on Thursday and appealed for outside help to tackle the emergency.

Yet the water taps were turned off this week in Harare — a city already blighted by electricity and water shortages — because of a shortage of water treatment chemicals. In Zimbabwe, sanitation, sewerage and access to clean water are the casualties of crumbling infrastructure, an economy on the skids and spiraling inflation. So, along with cholera, the rats have moved in, and with them, the prospect of more disease.

"The health system has totally collapsed," he says. "The three major hospitals here in Harare have closed. They've closed their doors for patients. We have anecdotal stories of clinics in the countryside being unable to operate. People are routinely turned away from clinics. And, in some places, police have been stationed outside of clinics to ensure that no one can enter the premises. Doctors and nurses are not being paid. So, that's the reality of the situation on the ground here in Zimbabwe."

On Wednesday, hundreds of doctors, nurses and other health workers attempted to organize another protest in Harare against the spread of cholera, the deepening economic crisis and their miserable pay and working conditions.

Earlier, they had put down their tools and gone on strike, but their march was broken up by riot police who used batons to charge into them. The vice president of Zimbabwe's Junior Doctors' Association, Dr. Malvern Nyamutora, said the authorities have done precious little to help them.

"The government is completely ignoring us," Nyamutora says. "With the way they are responding, they haven't addressed any of our issues, they haven't addressed why the people are dying, and I am actually wondering who they are going to rule if everyone is dead in Zimbabwe, because people are dying each and every day in numbers. So we are appealing to the international community — whoever can help us with clean water, drugs, IV fluid for the patients — to come in and try to assist. This is a crisis — people are dying. Please."

"You know, the disaster is horrifyingly evident in the morgue at the hospital," Phiri says. "It is stacked with dozens of bodies of the victims of cholera. The morgue is designed to hold 10 corpses. It held nearly twice that number, with victims in body bags. Trays in the morgue held more than one adult body along with tiny corpses of infants."

Phiri says something urgent must be done.

"There are many others who are dying at home," Phiri says. "There are others who are getting to the hospital a bit too late. It's a desperate situation, compounded with the raw sewage flowing there in the streets and kids playing in pools of sewage in the high-density suburbs."

At Zimbabwe's main teaching hospital, Harare Central, the neat collection of bungalow buildings framed by gorgeous bright red flame trees have an eerie feeling inside. There's not even a skeleton staff on duty — many professionals have simply abandoned the health sector and left Zimbabwe. Most wards are empty or have been closed down, and many blame the situation on the current political paralysis.

"We have a very, very bad situation," McGee, the U.S. ambassador, says.

"I don't see anything that's going to alleviate these problems until the government of President Robert Mugabe starts to act in good faith and deal with the Morgan Tsvangirai MDC faction in a true manner," he adds, referring to the stalled power-sharing negotiations. They were supposed to lead to a unity government after a deal was signed in September between Mugabe and his political opponents.

As they struggle each day, Zimbabweans are no longer pinning their hopes on the politicians. Survival is the priority for most people, says Umire, the mother-in-law of the young man who died of cholera.

"It's very tough because we don't have everything, from water to food. Nothing," she says after Roki has been laid to rest high on the mountain. "We survive like that, God knows. It's worse — it's worse, getting worse now."