Accessibility links
Obama Finished Campaign With Money To Spare The Obama campaign's post-election report shows that he raised nearly $750 million in his run for the White House. During the course of the campaign, he gathered 4 million donors and his fundraising surpassed the combined total of all the candidates in 2004.

Campaign donors who gave $200 or less gave the president-elect's fundraising machine a huge boost. Read about one such donor from Iowa.

A month after the election, a new disclosure report by President-elect Obama shows that he raised nearly three-quarters of a billion dollars in his run for the White House.

In fact, by almost any measure of political money now, Obama holds the record. From Oct. 16 through Nov. 24, the 40 days covered by the post-election report, 1.1 million donors gave a total of $104 million to Obama's campaign. Of those contributors, 547,000 had never given before, the campaign says. Overall, the campaign has 3.95 million donors.

Obama's fundraising surpassed the combined total of all the candidates in 2004, which was a record-setting year itself.

A group of political scientists convened a meeting on fundraising and other campaign topics Thursday — just before the reports came out, but after everyone knew pretty much what was coming.

Tony Corrado of Colby College noted that McCain had a not-so-shabby campaign budget of $277 million. "Sen. McCain had more money than John Kerry raised in 2004, and it looks like he's going to finish just shy of the amount that President Bush generated in 2004," Corrado said. "So he had an extraordinarily well-funded campaign. His problem was that he faced a financial behemoth."

And it was a behemoth that went beyond the realm of individual candidates. Corrado said Obama collected more money than the Democratic and Republican national committees together, "so that his campaign has essentially become a party unto itself."

As of Nov. 24, Obama still had $30 million in the bank. He has several options for that cash, including transferring it to the DNC, or using it to make small donations to political allies. The most powerful option may be simply to hold the money for a re-election bid in 2012, giving himself a head start that would make any challenger think twice.

Obama attained these financial heights by spurning the public financing system for both the primaries and the general election. He is the first major-party candidate to opt out of the fall-season public funds since the system took effect in 1976.

McCain opted into the system for the fall campaign. He received $84.1 million from the federal treasury, but that was also his spending cap.

The Obama campaign contended that it had its own version of public financing, including lots of small donors who gave small amounts repeatedly, until they became not-so-small donors.

Obama campaign counsel Bob Bauer said this new category of donors made the difference. "It did not seem to us at the time that there was any particular reason, for old times' sake, to take on a system, to join a system that had been declared to be broken," he told the academics. "There was no moral or other imperative for us to walk down that path."

Bauer is hardly the only one to see that Obama's fundraising success poses new questions about campaign finance law. Congress is under pressure to fix the public financing system — a program that, like other controls on political money, has its justification in preventing corruption and the appearance of corruption.

With the rise of a new donor class, Massie Ritsch, at the nonpartisan Center for Responsive Politics, frames the basic question as "whether these people who are giving $20 a month and might add up to $2,000 donors are really as fat a cat as the person who is dropping $2,300 at an event where they are meeting the candidate in person."

Ritsch points out that in modern politics, the fattest of fat cats are so-called bundlers — those who round up large contributions and deliver them, in metaphorical bundles, to the campaign.

"I don't think there's great concern that the person even giving a couple thousand dollars to a candidate raising three-quarters of a billion is going to be corrupting that candidate," he said in an interview. "But there is concern that the person who is able to raise those large contributions, adding up to more than half a million or a million dollars, might have the potential to corrupt or get some sort of payback in return."

Obama had more than 600 bundlers. He disclosed some information about them, but not much. Any disclosure is voluntary, because there's no law compelling the campaigns to identify their bundlers.

One more report is due from the Obama and McCain campaigns, closing out the year and the two-year campaign cycle. Those documents are due at the Federal Election Commission Jan. 31.

Obama's Money Magic? Get Them To Give Again 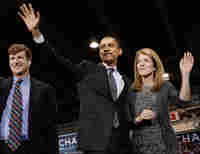 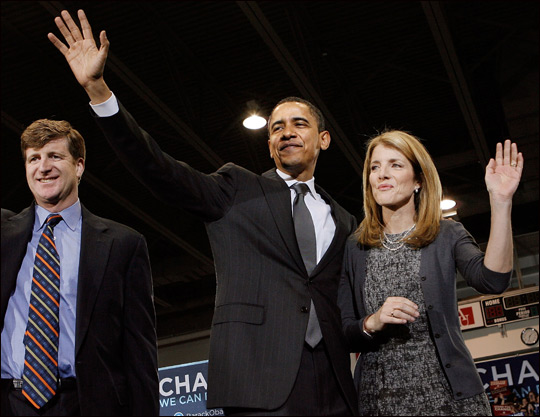 One campaign donor, Bev Hutney of Iowa, says Caroline Kennedy's endorsement of then-Sen. Barack Obama on Jan. 28, 2008, in Washington D.C., spurred her to give his campaign more money. 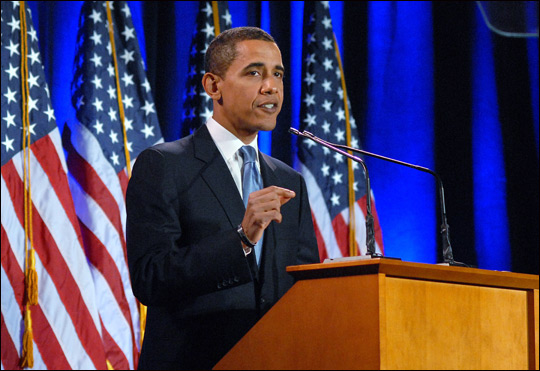 Then-Sen. Barack Obama speaks during a major address on race and politics at the National Constitution Center in Philadelphia in March.

Bev Hutney says she should have known better. She's a marketing pro, after all, fluent in the language and cutting-edge methods of persuading folks to part with their money.

But the Obama strategy got to her. The personalized "Bev" e-mails. The insidery updates from campaign manager David Plouffe. The notes signed by "Michelle."

And so, like thousands of other supporters who started out making a small campaign donation and then got hooked, Hutney, of suburban Des Moines, Iowa, became a repeat giver. She made five online contributions this year totaling more than $250, and she's not done yet. (The $50 "limited edition" official Obama fleece jacket she ordered this week is expected to arrive by Christmas Eve.)

"They sucked me in. I was getting these daily e-mails and feeling that I was part of the inner circle," says Hutney, 44, creative director for a nonprofit direct marketing firm. "And if anyone is savvy to the tricks of the trade, it's me."

Repeat givers like Hutney typically started out thinking small. And without the Obama campaign's sophisticated online wooing, they most likely would have remained in the category of "small donor," historically defined as giving a total of $200 or less.

But now the repeaters may represent the real news of the record-busting $745 million raised by Obama, says Michael Malbin, director of the nonpartisan Campaign Finance Institute. Especially since a recent analysis by the institute showed that small donors accounted for exactly the same percentage of all contributors to Obama's campaign as they did to President Bush's in 2004.

The survey showed that 83 percent of both Obama and Bush donations came from small donors, and those donors contributed about 25 percent of both candidates' overall haul.

Obama's repeat donors, however, comprised an "unusually large" group compared with past elections, Malbin says. Final 2008 numbers are still being analyzed, but by the end of August, 212,000 repeat donors had given an average of $490; during the same period, 2.5 million small donors had given an average of $65 each. Not only did their overall contributions in the primary season match those from small donors, but the serial givers also became "engaged and involved," he says, "and many ended up volunteering for the campaign."

Final general election data are expected to show much the same. The repeaters kept coming back, and not only because of Obama's sophisticated e-mail and online strategy, which merged the campaign's grass-roots and fundraising efforts. They came back because the primary season went on for so long, Malbin says, and also because Obama became the first major-party candidate to opt out of public financing since spending rules were adopted three decades ago. The move allowed him to raise unlimited funds for the general election contest against GOP nominee John McCain.

Hutney, who had never before given money to an individual candidate, can tick off events that prompted her to give more after her initial post-Iowa caucus donation. There was Caroline Kennedy's endorsement, Obama's speech on race in America, and the contentious South Carolina primary, when she says she started feeling "panicky" about the outcome.

"From time to time, something would touch me or something would happen, and I was motivated by that," she says. Giving in small increments was easier to justify. It was grocery money, a bottle of wine — "not painful at all," Hutney says.

The question now is whether Obama can keep repeat donors engaged and use them to promote his legislative agenda. Malbin predicts they will become more politically active, and not just through contributing to Democratic efforts. As for Hutney, she's all in. "To have a president want to speak with me, to let me know what's going on and to be part of the process — that, to me, is fascinating," she says.