Accessibility links
Mining-Rule Change Creates Tremors In W.Va. The Environmental Protection Agency recently approved a last-minute rule change to allow mining within 100 feet of rivers and streams. One environmentalist says it will devastate the region, while mining proponents say the industry is too important to the state to consider alternatives.

A coal truck trundles along at a mountaintop removal mine on the Boone/Lincoln County line in West Virginia. Scott Finn/WVPB hide caption 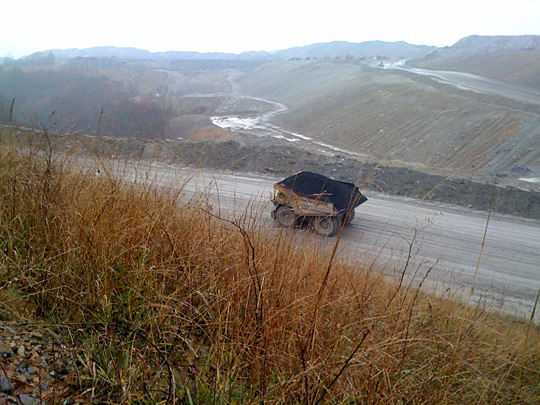 A coal truck trundles along at a mountaintop removal mine on the Boone/Lincoln County line in West Virginia.

Earlier this week, the Environmental Protection Agency approved a last-minute rule change, long sought by the coal industry, to allow mining within 100 feet of rivers and streams.

Environmentalists say this change will make it harder for them — and for President-elect Barack Obama's incoming administration — to challenge a controversial form of coal mining called mountaintop removal. That's when coal companies chop off the tops of mountains, mine the coal underneath and dump the leftover rock and dirt into nearby valleys and streams.

The decision will greatly impact people who live in the shadow of mountaintop removal.

Lucille Miller's childhood home in Lincoln County, W.Va., is a tidy white farmhouse surrounded on three sides by a massive mountaintop removal mine almost as large as Manhattan Island. Piles of dirt and rubble as high as 10 and 20 stories tower overhead. There's nothing left of the creek behind her house — it's covered with tons of dirt.

No one lives here now, but Lucille and her husband, Leon, come back almost every weekend. And in the summers, the family reunions can last weeks.

"They all like to come back home, and this is home," Leon Miller says. "They climb the hills and ..."

"What's left of the hills," Miller says. "We don't have too many left. And they swim in the river. Of course, we're kind of afraid to let them do that, with the selenium, you know."

Selenium is a mineral by-product of surface mining. A recent study found high levels of it in the Mud River — in addition to deformed salamanders with crooked spines and misplaced eyes.

In a report published this year, the EPA's own scientists found runoff from such mines contained high levels of hazardous chemicals. But in an about-face Tuesday, the agency signed off on the Bush administration's proposal to allow dirt and rocks to be dumped into certain streams.

"It seems ridiculous in one way, but really, it's a tragedy for this region," Lovett says. "Our future is being taken from us by these mining companies. I understand there are jobs at stake, but there are ways to get coal out of the ground that don't devastate the environment the way mountaintop removal does."

But Steve Walker of mine supplier Walker Machinery says alternatives such as underground mining are too expensive in some areas.

In West Virginia, the mines employ more than 20,000 people, making mining one of the state's most important industries. With the recession, Walker says, it's no time to discuss the elimination of any mining.

"Right now, in talking to many of my customers, they're scared to death," he says. "It's already put a chill on investment, because they do not know the direction the mining business is going to go in West Virginia.

Walker makes another point: The ugly piles of rocks and dirt will someday be reclaimed. Most are eventually planted with grasses and look more like the deserts of the American West than West Virginia. A few sites have been developed.

"Over the years, we've built a prison, golf course and schools," Walker says. "It's like building a highway — it looks ugly while you're doing it, but 20, 25 years later, it looks beautiful."

The Millers say they plan to stick around and see what becomes of the mine above their property. A few years ago, the mining company tried to force them to sell their land. But the family won a precedent-setting court case that says they can't be forced out.

Bank of America announced this week that it would no longer finance mountaintop removal mining, adding to growing pressure on mining companies and on Obama to change how mining is done in Appalachia.