Accessibility links
Smugglers' Tunnels In Gaza Strip Booming Israel imposed an economic blockade on Gaza when the radical Islamic group Hamas seized control last year. To bring in goods — from weapons to cigarettes — smugglers are using tunnels under the Gaza-Egypt border. Smuggling was once mainly the work of a few people derided as criminals. Hamas now calls it a patriotic duty, and business is booming.

Israel imposed an economic blockade on Gaza when the radical Islamic group Hamas seized control last year. To bring in goods — from weapons to cigarettes — smugglers are using tunnels under the Gaza-Egypt border. Smuggling was once mainly the work of a few people derided as criminals. Hamas now calls it a patriotic duty, and business is booming. 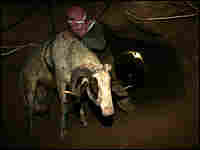 A Palestinian smuggler attaches a sheep to a harness to hoist it into the Gaza Strip at the top of a tunnel under the Egypt-Gaza border at Rafah on Dec. 5. Said Khatib/AFP/Getty Images hide caption 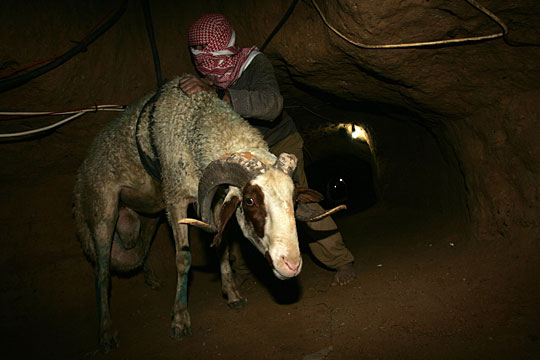 A Palestinian smuggler attaches a sheep to a harness to hoist it into the Gaza Strip at the top of a tunnel under the Egypt-Gaza border at Rafah on Dec. 5.

Let's go next to the Middle East where Palestinians are trying to dig out of an economic crisis. And when we say dig out, this is not a figure of speech. Ever since the Islamist group Hamas seized control of the Gaza Strip, Israel has imposed an economic blockade. And that has created an underground economy. Smugglers bring in everything from weapons to cigarettes using tunnels under the border with Egypt. This work was once done in secret by a few people derided as criminals. Now Hamas calls it a patriotic duty. And business is booming. NPR's Eric Westervelt reports from Gaza's southern border.

ERIC WESTERVELT: What's really incredible is to try to get a sense of the scale here. I'm looking down along the Egypt-Gaza border. There are literally hundreds, perhaps a thousand tents strung out all along the border across several miles. Each tent represents a tunnel that all day, every day is hauling goods across from Egypt, everything from small refrigerators to cattle to cigarettes to gasoline. And the hum of the generators, the cacophonous hum, is incessant. As you walk here, it's just a tent city. An entire city has essentially sprouted up here along the Egypt-Gaza border, a city committed to smuggling.

(Soundbite of men speaking in Arabic)

WESTERVELT: Inside one smuggler's tent, the workers are excited. Word comes that diggers have almost reached Egypt. They've been working around the clock, and the foreman - we'll call him Nabil(ph) - hears that his lead digger needs water. Using a thick steel cable and a motorized winch, he lowers a plastic bottle down a harrowingly narrow 70-foot-deep dirt shaft. A few light bulbs strung from a wire illuminate the stark of the tiny tunnel that stretches nearly half a mile from Gaza to the Egyptian side. A compressor pumps vital air into the shaft. The tunnel is barely four feet high, so workers have to squat to use an industrial power drill with a metal wedge attached to hack away the thick mud. They haul the dirt to the surface using big plastic barrels.

Smuggling, while long tolerated in south Gaza, was always seen as a dirty job best left to criminals. But today the ruling Hamas movement promotes smuggling as a brave act of resistance. Nabil's mud-caked right hand clenches a cigarette, Egyptian of course. He calls his men and the thousands of other tunnel diggers here patriots doing what they must to get basic goods into sealed-off Gaza.

NABIL (Palestinian Foreman): (Through Translator) This is a challenge against the whole world, against the Israelis, against the Americans, against everyone. If they don't want us to live, we will do it because we will survive.

WESTERVELT: More than 50 diggers have died in tunnel collapses so far this year. Several more were electrocuted. This digger, who didn't want his name used, says he gets about 30 bucks a day and has no other choice.

Unidentified Man: (Palestinian Tunnel Digger): (Through Translator) We don't have other work, first of all. So do you want me to sit home and starve like in Somalia? I will risk my life and get money. A lot of Palestinians benefit from my work. Why not do it? It is worth risking my life.

WESTERVELT: On the Gaza side of Rafah, outdoor markets have sprouted up all over this dusty border town. We're at the bustling outdoor Rafah market. It's a makeshift market. Think of it as a kind of chaotic Gaza version of duty free. Here you see everything for sale that's come through these tunnels, everything from microwaves to televisions. I see generators. Here's a washing machine.

The explosion in the number of tunnels here is another example of how pressure on Hamas by Israel and the West has in effect backfired. Hamas has institutionalized the booming tunnel business. The Islamist group charges about $5,000 for a digging license and collects monthly taxes and fees. Hamas leaders get to show Gazans that they're doing something about the border closures and sanctions. Israeli intelligence warns that Hamas is using the tunnels to import longer-range rockets and high explosives. Hamas overall is getting stronger. But ordinary Gazans still get the shaft. They're stuck with high-priced, low-quality Egyptian goods many simply cannot afford. Rafah resident Adnan Hussein(ph) is among the shoppers here this evening.

Mr. ADNAN HUSSEIN: (Through Translator) We are all Gazans, and we all prefer to live freely and live normally like other humans. But what can we do? All the world put their siege on us and obliged us to smuggle our needs through the tunnels.

WESTERVELT: Hussein looks at some shoes for sale stacked on a rickety cardboard box barely visible now as there's no electricity in Rafah this night. He gazes at plastic Egyptian footwear by candlelight and walks on. Eric Westervelt, NPR News, Rafah, Gaza.