Accessibility links
Excerpt: 'The Tribes Of America' I've been a political radical since the Sixties. But by late 1971, when I began these explorations, life inside the New Left had become an emotional burden.

Excerpt: 'The Tribes Of America'

Excerpt: 'The Tribes Of America' 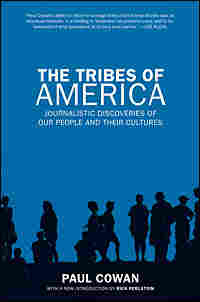 The Tribes of America: Journalistic Discoveries of Our People and Their Cultures
By Paul Cowan
Paperback, 320 pages
The New Press
List price: $16.95

This book represents a seven-year effort to learn more about America and about myself, and to develop a way of writing about my discoveries.

I've been a political radical since the Sixties. But by late 1971, when I began these explorations, life inside the New Left had become an emotional burden. By then, we'd helped end legal segregation in the South and were helping to stop the war in Vietnam. But we didn't act like people who had triumphed. Now I look back on those years as a time of a collective nervous breakdown, when most of us — youngsters, really, in our teens and twenties — could no longer cope with the strain of combating the evils we saw in American and in ourselves. Most of us survived that breakdown; many became activists again. But, back then, in the early Seventies, our world seemed like a nightmare of intellectual claustrophobia. So, gradually, half-consciously, without any theory or any plan, I decided to cross the sound barrier of dogma and test my beliefs against the realities in American life. I described my findings in pieces I published in The Village Voice.

It was thrilling — and terrifying — to read a New York Times article about a fight over some textbooks in West Virginia, or about some coal miners who were striking in Harlan County, or truck drivers who were closing down America's highways, and know that the Voice would assign me to discover the human feelings behind those stark facts. I could spend weeks or months in cultures I'd always regarded as remote, mysterious, even mythical — with Mexicans in the border town of Juarez, or fundamentalist Christians in Campbell's Creek, West Virginia, or European-born Jews on New York's Lower East Side. My profession and my passion coincided. I could immerse myself in the lives of unsung people, and learn so much about their communities that I became almost fluent in their private language: in the details of their work, their faith, their manner of speech, their attitudes towards one another. I tried to see them, and America — and my own presence among them — from their point of view. That was the best way to unlearn my own prejudices, and to challenge those of my readers.

Over the years I found myself changing. I am very much a product of the highly mobile urban elite. My parents, who were successful in show business and politics, sent me to Choate and Harvard; my politics, which they influenced greatly, sent me South during the civil-rights movement and to Ecuador during the heyday of the Peace Corps; my desire to write experimental, personal journalism for a highly educated audience sent me to the most freewheeling of all newspapers, The Village Voice.

Those things were all blessings. Still, I always felt that something substantial was missing from my life. The flip side of privilege, American-style, was the disturbing feeling that one lived outside of history. That sense subsided when the New Left was strong: when politics was a creed, when it furnished an identity one could be proud of. But that was over by 1972. Besides, I was married and had two children. I wanted something more nourishing, more permanent, than the political struggles, the cultural fads, the journalistic assignments, that seemed to eddy randomly through my life.

I sensed what it was as I got to know Orthodox Jews on New York's Lower East Side, churchgoing blacks in Chicago, coal miners who had left safe, well-paying jobs in the Midwest for the dangers and insecurities of their Appalachian home, Mexicans who cared deeply for their community in Juarez. The stories I wrote about them turned out to be dialogues with experience, with my own private dissatisfactions. As a whole, they left me with a profound respect for the stability of religion, of ceremony, of family life: of customs I'd once regarded as old-fashioned and bourgeois. They pushed me toward an increasingly deep interest in my own religion, Judaism, and a desire to organize a part of my life around that rich heritage.

I know now that I want an emotionally satisfying faith; an enriching family life; a secure, peaceful neighborhood for my kids. Yet those same longings, translated into political terms, have produced the vicious fights I've witnessed for the past seven years and recorded in this book. How can one embrace them and still be an integrationist, still be a political progressive? Some leftists — including many who have chosen popular journalism as their profession — maintain their purity by heaping scorn on those values. But how can one do that without disowning most people in this country, without disowning the most primal part of oneself?

These personal questions underlie most of the journalism in this book.

The Tribes of America is a metaphor for my way of seeing this country. And it is a political statement.

I was raised to believe that the United States is a melting pot, and since I'm a confirmed racial, sexual, and cultural integrationist, I'd still like to think that was true. But I don't. The last seven years have convinced me that the melting pot — with its dream of a single, unified America — is largely a myth.

We are unified during times of crisis like World War II, like assassinations. We're united as consumers. We vote in the same national elections. We have a mass culture in common — most of us are aware of Elvis's death, we can imitate the Fonz, we argue about Muhammad Ali or the Yankees or the Dallas Cowboys.

But, to an unrecognized extent, we're a nation of professional, religious, ethnic, and racial tribes — the Tribes of America — who maintain a fragile truce, easily and often broken. We had to conquer this continent — and its original tribes — in order to exploit its resources. But we were never able to conquer our atavistic hatreds, to accept our widely diverse pasts, to transcend them, to live together as a single people.

Of course, if you transform that insight into a generalization, it dissolves immediately. There is probably more mingling of cultures here than anywhere in the world — a greater acceptance of mixed marriages, say, a more genuine interest in unfamiliar customs and beliefs, a relaxed acceptance of diversity on the assembly line or the ball field. Nevertheless, the currents of tribalism run deep. And, when political or social pressures are severe, they become floodwaters.

That's most obvious, I guess, in disputes involving race. Where there's a fight over busing or over jobs, blacks and whites inevitably see each other through the distorting lens of their own particular culture. Small details assume menacingly grotesque proportions. I saw that when I covered the 1971 battle over a low-income housing project in the Forest Hills section of Queens, and when I covered busing in Boston. It was hard for white people to see past the fact that a man was black and think about his character. Thus, to them, blacks "strutted," they never walked; they cursed and hollered, they never talked. If they dressed well, they were drug dealers or pimps, not honest, successful businessmen or professional people. The accretion of these stereotypes made them see blacks as "animals," and no amount of rational argument could change their minds.

Similarly, during the worst weeks of the busing crisis in Boston, it was hard for some of the blacks I interviewed to see that the presence of a few people who claimed to be members of the Ku Klux Klan did not presage the resurrection of that ancient foe. Even after the most severe tensions subsided, it was hard for them to see that whites were just as frightened, just as hungry for economic and emotional security as they were.

The interaction of stereotypes made peace nearly impossible.

But race isn't the only tribal banner. In Kanawha County, West Virginia, the "creekers" — working-class whites, mostly Baptists — were at war with the "hillers" — professional people, mostly Congregationalists and Episcopalians. The immediate issue was the textbooks that would be used in the schools. But the battle was really a cultural civil war between fundamentalist Christians and secular humanists over the kind of nation their children would inhabit.

All along the Mexican border, Anglos are terrified that Hispanics — particularly illegal aliens — will steal their jobs, enjoy special privileges, and smuggle a new kind of separatism — the separatism of language — into American life. On the Lower East Side of New York, a Puerto Rican who disperse poverty funds can ignore the stark fact that hundreds of thousands of elderly Jews live below the poverty level of $3,500 by echoing the old tribal myth that "there is no such thing as a poor Jew."

Of course, tribalism has its advantages, too. These days they're most often suggested by phrases like "my search for my roots." I've tried to show how that attitude affected me when I wrote about the unexpectedly strong links I felt to the poor Jews I met on New York's Lower East Side or my unexpectedly close, almost filial relationship with the Polish-born Orthodox Rabbi Joseph Singer. There's no question that my deepening awareness of being Jewish has given me a more secure sense of my own identity. It has eased my loneliness in America by teaching me that I do have a home in a tradition I love.

But the tensions of tribalism have haunted me throughout most of this journalistic journey. I keep trying to find a political language, a journalistic language, that will help people form alliances based on economic needs rather than ethnic stereotypes; that will help us affirm what's richest, most special about each specific tribal heritage instead of denying those qualities in the name of some bland idea of America; that will help us learn from one another instead of fighting one another. Often, as I've written about the situations I've witnessed, I've doubted that could happen. Yet it is one of the obsessions that dominates this book.

Excerpted from The Tribes of America: Journalistic Discoveries of Our People and Their Cultures by Paul Cowan Copyright © 2008 by Paul Cowan. Excerpted by permission of The New Press. All rights reserved. 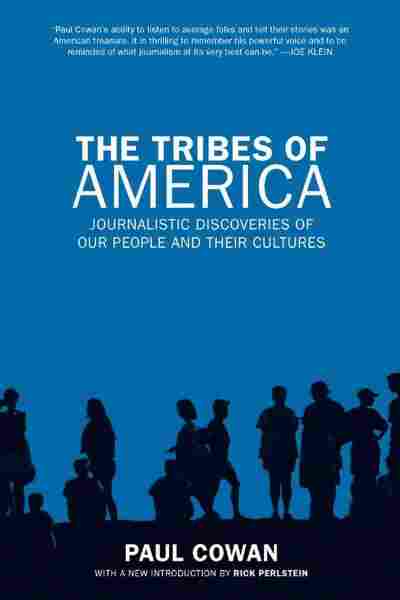 The Tribes of America

Journalistic Discoveries of Our People and Their Cultures

by Paul Cowan and Rick Perlstein