Accessibility links
Dogs Understand Fairness, Get Jealous, Study Finds A new study suggests that dogs can feel jealous and become resentful if they think another dog is getting a better deal. If canines spot unfair treatment, they're likely to become less cooperative, researchers found. 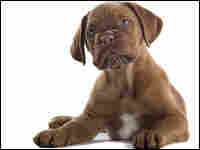 Dogs have an intuitive understanding of fair play and become resentful if they feel that another dog is getting a better deal, a new study has found.

The study, in the Proceedings of the National Academy of Sciences, looked at how dogs react when a buddy is rewarded for the same trick in an unequal way.

Friederike Range, a researcher at the University of Vienna in Austria, and her colleagues did a series of experiments with dogs who knew how to respond to the command "give the paw," or shake. The dogs were normally happy to repeatedly give the paw, whether they got a reward or not.

But that changed if they saw that another dog was being rewarded with a piece of food, while they received nothing.

"We found that the dogs hesitated significantly longer when obeying the command to give the paw," the researchers write. The unrewarded dogs eventually stopped cooperating.

Scientists have long known that humans pay close attention to inequity. Even little children are quick to yell "Not fair!" But researchers always assumed that animals didn't share this trait.

"The argument was that this is a uniquely human phenomenon," says Frans de Waal, a professor of psychology at Emory University in Atlanta and a researcher at the Yerkes National Primate Research Center.

That changed in 2003 when he and a colleague named Sarah Brosnan did a study on monkeys. Monkeys had to hand a small rock to researchers to get a piece of food in return. Monkeys were happy to do this to get a piece of cucumber. But the monkeys would suddenly act insulted to be offered cucumber if they saw that another monkey was getting a more delicious reward, a grape, for doing the same job.

"The one who got cucumber became very agitated, threw out the food, threw out the rock that we exchanged with them, and at some point just stopped performing," says de Waal.

In that experiment, the monkeys considered the fairness of two different types of payment. But when Range and her colleagues did a similar study with their trained dogs, testing to see if dogs would become upset if they only got dark bread when other dogs received sausage, they found that dogs did not make that kind of subtle distinction. As long as the dogs got some kind of food payment, even if it wasn't the yummiest kind, the animals would play along.

Dogs, like monkeys, live in cooperative societies, so de Waal was not surprised that they would have also some sense of fairness. He expects other animals do as well. For example, he says, lions hunt cooperatively, and he "would predict that lions would be sensitive to who has done what and what do they get for it."