Accessibility links
Earth-Like Planet Discovered in Libra A team of astronomers has discovered an Earth-like planet orbiting a red dwarf star 20.5 light-years away. It is the first planet outside of our solar system that could be home to liquid water — or maybe even life. 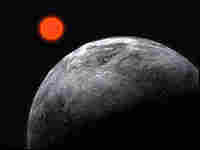 Astronomers have discovered the most Earth-like planet yet in another solar system. It is the first planet outside of our solar system that could be home to liquid water. Above is an artist's illustration of the planet, which scientists think is either rocky, or covered with oceans. ESO hide caption 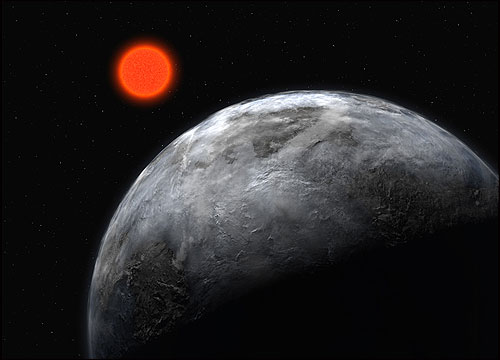 Astronomers have discovered the most Earth-like planet yet in another solar system. It is the first planet outside of our solar system that could be home to liquid water. Above is an artist's illustration of the planet, which scientists think is either rocky, or covered with oceans. 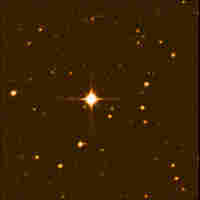 The Earth-like planet orbits Gliese 581 — a red dwarf located 20.5 light-years away in the constellation Libra. Red dwarf stars are too faint to be seen from Earth with the naked eye. Digital Sky Survey hide caption 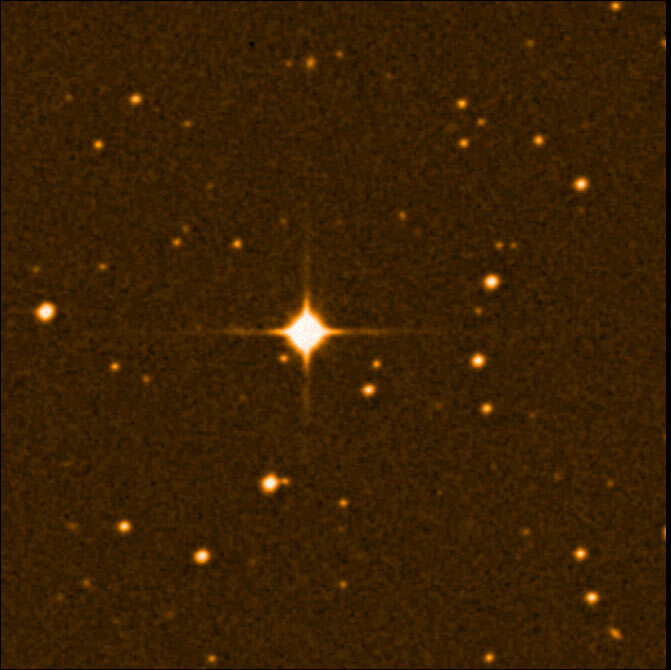 The Earth-like planet orbits Gliese 581 — a red dwarf located 20.5 light-years away in the constellation Libra. Red dwarf stars are too faint to be seen from Earth with the naked eye.

Scientists have discovered a new planet in the constellation Libra. The small, rocky planet is special because it appears to have mild temperatures, like Earth. Researchers believe it looks like the first planet outside of our solar system that could be home to liquid water, and maybe even life.

Our solar system has only eight planets — nine if you count Pluto. But outside of our solar system, around other stars, scientists have found dozens and dozens of planets.

"We have discovered more than 100 planets, here in Geneva," says Michel Mayor, a planet hunter at the University of Geneva.

Almost all of these known "extrasolar" planets are giant balls of gas, much like Jupiter or Saturn. Such massive planets are relatively easy to find. They have a gravitational pull that makes their stars wobble, and when scientists see that wobble, they know there is a planet. Small, rocky planets cause less of a wobble, making them harder to find.

Still, Mayor and his colleagues have had some luck using the European Southern Observatory's big telescope at La Silla, Chile. They recently pointed it at a nearby star called Gliese 581, in the constellation Libra.

"It's one of our closest neighbors in the galaxy," Mayor says.

His team has found three planets around this star, and one of them is particularly interesting. They think the planet is a little bigger than Earth, with about five times the Earth's mass. It orbits very close to its star, going all the way around in just 13 days. The planet isn't super hot though, because Gliese 581 is a red dwarf, which is much dimmer and cooler than our sun.

Scientists calculate that average temperatures on the surface of the planet should be around 32 to 104 degrees Fahrenheit. Mayor says that is a friendly environment for liquid water and maybe even life.

"We do not have any reason to believe that life exists on that planet," Mayor concedes. "We can only say that we have the temperature to permit the development of life. I would say it's one very interesting step in a long process going in the direction to having some major discovery related to life in the universe."

A report on the discovery has been submitted to the journal Astronomy and Astrophysics, and other experts agree that it is a significant find. Alan Boss is a planetary scientist at the Carnegie Institution of Washington.

Other small planets discovered in the past have been very hot, or very cold. In many ways, though, this planet is a mystery.

"We do not know what the composition of the planet is," says Boss, explaining that scientists assume it is made of rock and metal like Earth. "We do not know how much water it may or may not have on it."

Boss says we could learn a lot more if scientists launched a space telescope that is specially designed to look at faraway planets. NASA has one in development called the Terrestrial Planet Finder, but it has been delayed indefinitely by budget woes.

"Things like Terrestrial Planet Finder are no longer really in the active NASA plan," Boss says.

Still, some scientists have a mental picture of the place. Todd Henry, an astronomer at Georgia State University, says that if you were standing on this planet and looked up, its sun would appear to be huge — five times bigger than our sun looks to us.

"It's going to look very different in this sort of alien situation that we're in than what we're used to here on Earth," Henry says. "The star itself is actually going to look sort of the color of Mars — sort of a red, ruddy color. But it would be much bigger in the sky than we're used to."

He says the star is also notable because the Geneva team found those two other planets circling it. They are also relatively small planets, which have been harder to find.

"This is starting to look like a solar system we're familiar with," Henry says. "If you were in a spaceship and you sort of flew into this system, this is one of the most interesting ones there is out there now."

But don't count on visiting anytime soon. Even though Gliese 581 is close, compared with other stars, it still would take over 20 years to get there — if we could travel at the speed of light, which we can't do.