Accessibility links
Bush May Scale Back Plans For Marine Reserve The White House is considering the designation of a new marine reserve in the Northern Mariana Islands, but it may not get the same amount of protection as an area created two years ago near Hawaii. The same could be true for other sites in the Pacific that are also under consideration.

Listen
Bush May Scale Back Plans For Marine Reserve

Two years ago, President Bush won high praise from a group that's been largely critical of him: environmentalists. They were elated after the president declared a huge area near Hawaii a protected marine monument.

The White House is now trying to secure the president's place in ocean history with a similar preserve elsewhere in the Pacific. Only this time, the political sailing isn't so smooth, and the administration may be scaling back its ambitious plans.

The heart of the new marine monument would be in U.S. territorial waters north of Guam — the Northern Mariana Islands.

Ike Cabrerra, from the island of Saipan, is one of just a handful of people who have ever made it to the north end of the island chain.

"There's no place in the world compared to this area," Cabrerra said. "Most of the islands are volcano."

A Plea For Protection

The waters are rich with undisturbed sea life and home to some of the world's most majestic underwater geology, including the deepest canyon in the ocean, the Mariana Trench. But all is not perfect in paradise. While locals like Cabrerra support a marine preserve, their elected officials do not.

So Cabrerra traveled to Washington to lobby for the protected area. His traveling companion, Andrew Salas, said the politicians don't object to conservation, but they are upset with the federal government. It seems Uncle Sam recently took control of immigration policy for the Northern Marianas and also instituted the federal minimum wage.

"So this awesome idea to protect those islands came in at the wrong time, and everyone thought, 'Oh, another federal intervention,' " Salas said.

Salas and Cabrerra went to the White House this week to plead for complete protection for an area the size of Arizona. They brought with them petitions signed by businesses, schoolchildren and 6,000 local residents. The island only has 10,000 voters.

Salas said a protected area isn't just good for the environment, but tourism could boost local businesses like his. He owns the Hawaii Bar and Grill on Saipan.

"I'm actually going to change the name of that thing as soon as this thing gets declared. I'm going to make it the Mariana Trench Bar and Grill," he said.

But to declare complete success, the conservation group will not only have to trump the local politicians: Other interest groups have been marching into the White House with requests to argue against a fully protected monument.

Gordon Robertson of the American Sportfishing Association pleaded his organization's case: "Let's not make a designation and foreclose this recreational fishing right up front, because it is compatible with conservation and it is easily controlled."

The huge Hawaiian monument designated two years ago bans fishing. That did not sit well with Robertson.

"I would like to think that if that opportunity presented itself again, it would be done differently," he said.

The White House might not fully protect the area off the Northern Marianas, even though the place is so remote that there's essentially no fishing there.

The same could be true for other sites in the Pacific that the White House is also considering. The potential conflicts aren't just fishing, but include possible military uses, cultural activities, and mining and energy development, said James Connaughton, who's in charge of this issue at the White House.

That could mean scaling back the size of some of the proposed preserves, or not offering complete protection everywhere.

Jay Nelson of the Pew Environment Group said so little of the ocean is undisturbed that he wants the White House to fully protect as much as it possibly can.

"They run the risk, if they start to listen to too many constituencies, of making essentially everyone unhappy," he said.

And, at this point, time is running short. Connaughton said that, in the end, he may hand off all the work he has done to the Obama administration. 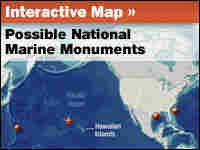 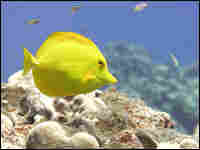 A yellow tang near the Northern Marianas Island of Maug. The waters around this area could possibly be protected from fishing and economic development according to a proposal under review by the White House. NOAA, Pacific Islands Fisheries Science Center, Coral Reef Ecosystem Division, Photographer: R. Schroeder hide caption

Presidents' unilateral power to create national monuments has led to fierce political brawls. Here, a few key points in the history of the Antiquities Act.

The Bush administration is considering launching one of the biggest conservation programs in U.S. history.

If implemented, President George W. Bush could, with the stroke of a pen, protect vast stretches of U.S. territorial waters from fishing, oil exploration and other forms of commercial development. The initiative could also create some of the largest marine reserves in the world — far larger than national parks like Yellowstone or the Grand Canyon.

The White House is thinking about taking "big steps, not small ones," says Jack Sobel, a senior scientist at the Washington-based Ocean Conservancy, an environmental group.

A spokesman for the White House Council on Environmental Quality confirmed that the administration is considering the initiative but declined to discuss details, saying they are still under review.

The idea is drawing strong support from conservationists who typically have been harshly critical of the Bush administration's overall environmental record. But some of the possible reserves are already attracting opposition from local leaders and industry groups and from some members of Congress.

National Monuments in the Sea

Conservationists say that CEQ officials last year invited a small number of ocean advocates to an unusual, closed-door meeting to discuss the idea. The White House asked them to help identify potential reserves in waters within the United States' "exclusive economic zone," which extends 200 nautical miles out from the mainland and U.S.-owned islands around the world.

The idea, says Sobel, was to highlight areas where President Bush could create "marine monuments" under the Antiquities Act of 1906. This law gives the president broad powers to protect areas of "historic or scientific interest" without congressional approval.

The groups took the invitation seriously, in part because Bush, in 2006, used the Antiquities Act to create one of the world's largest marine reserves, around the Northwestern Hawaiian Islands.

The groups — along with government agencies and other interested parties – ultimately developed a "wish list" that included about 30 potential marine monuments. They ranged from small reserves in U.S. coastal waters to vast swaths around U.S. territories in the distant Central Pacific. The candidates stretched "from Bar Harbor, Maine, to Dutch Harbor, Alaska" and beyond, says Jay Nelson of the Washington-based Pew Environment Group.

The White House has now shortened that list to about five finalists, say scientists involved in the process. The list hasn't been released to the public, and a CEQ spokesman says changes are still possible. But conservation groups have identified some of the leading nominees.

By far the most ambitious proposal is to protect more than 600,000 square miles around a number of small, mostly uninhabited islands in the Central Pacific. The islands — including Palmyra, Howland and Baker — are surrounded by biologically rich coral reefs and are home to huge seabird colonies. If implemented, the reserve would be among the largest in the world and about three times as large as the Hawaiian monument.

Another proposal calls for protecting more than 100,000 square miles of notoriously rough waters around the Northern Mariana Islands, in the Western Pacific. The area includes the 36,000-foot-deep Marianas Trench.

"It's the deepest point in the world," says Nelson. "If you dropped Mt. Everest in it, there would be a mile of water above the mountain."

Another proposal is to place a 500-square-mile reserve around Rose Atoll in the South Pacific east of Australia.

Nelson says it's important to protect these areas before fishing or energy companies begin to exploit them. The same argument is being made in favor of two other potential monuments closer to the U.S. mainland. One would protect a massive network of deep-water corals off the coasts of Florida, Georgia and the Carolinas. The other would protect coral reefs and ridges found mostly in the Gulf of Mexico.

"Once somebody's fishing there it will be a difficult and contentious fight," says Mike Hirschfeld of the nonprofit group Oceana. "It's simpler to set these areas aside when there isn't a problem rather than wait for one to develop."

A 'Blue Legacy' for President Bush

An array of ocean advocates — both Democrats and Republicans — are urging the White House to forge ahead with the proposals, saying it would enable President Bush to build a "blue legacy" that would make him a major figure in conservation history.

"These would all be terrific additions to what is already President Bush's greatest environmental legacy," the Hawaiian monument, says James Greenwood, a former Republican congressman from Pennsylvania, who now heads the Biotechnology Industry Organization. Greenwood, who has close ties to the White House, says that he has been lobbying Bush for years to take major action on ocean conservation.

Bush could become the "Teddy Roosevelt of the seas," conservationists say. President Theodore Roosevelt protected about 230 million acres in new parks and forests, notes Elliott Norse of the Marine Conservation Biology Institute in Washington. Bush has the chance "to protect more," he says.

Typically, creating marine reserves requires the approval of Congress and an extensive public comment process. By using the Antiquities Act, the White House can sidestep those requirements. President Bill Clinton, for instance, used the law to unilaterally protect a huge chunk of Utah, angering many state and local politicians. But a CEQ spokesman said that if the current initiative moves forward, it will very likely include some kind of public comment process.

There is already opposition to several of the potential reserves. This month, Republican Sen. David Vitter of Louisiana said he didn't like the plan to protect corals in the Gulf of Mexico, arguing that the economic consequences are "potentially grave," particularly for the fishing industry. Members of Congress from states along the Gulf also floated, and then withdrew, legislative language that would have prevented the government from spending money to establish the monument.

Out in the Pacific, local politicians and commercial interests also are voicing opposition to a Marianas Trench monument.

"We don't even have a voting member in Congress, and we've got the president of the U.S., who basically could slam the door on any future potential that is there," says John Gourley, an environmental consultant on the island of Saipan, who has worked for the fishing industry. "[We] should be able to use these resources in an environmentally sensitive manner."

A decision on the initiative could come within a month.