Accessibility links
Carter: African Leaders Must Pressure Mugabe Former President Jimmy Carter says reports of humanitarian conditions from inside Zimbabwe are "horrifying and even much worse than we had feared." He says conditions might only improve if neighboring African nations pressure Zimbabwe's President Robert Mugabe to step down. 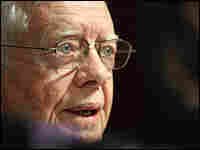 Former President Jimmy Carter, a member of "The Elders," says the humanitarian crisis in Zimbabwe is "horrifying and even much worse than we had feared." Alexander Joe/AFP/Getty Images hide caption 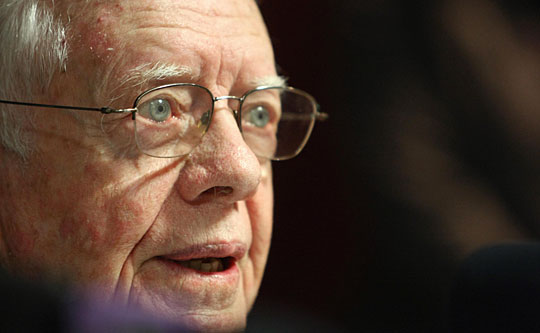 Former President Jimmy Carter, a member of "The Elders," says the humanitarian crisis in Zimbabwe is "horrifying and even much worse than we had feared."

Former President Jimmy Carter says reports of humanitarian conditions from inside Zimbabwe are "horrifying and even much worse than we had feared." He and a group of advisers known as "The Elders" were prohibited from entering the country and surveying the situation on the ground personally. A continuing power struggle in government combined with a widening cholera outbreak is gripping the nation.

"[Zimbabwean President Robert] Mugabe had made every effort, successfully, to conceal the fact that there's an absolute, total humanitarian crisis in his country," Carter tells NPR's Renee Montagne. Carter says the "campaign of oppression" in the country to restrain dissenting voices is contributing to the problem.

"The rate of death of cholera patients in Zimbabwe is 10 times greater than it would be if they had normal treatments," Carter says, adding that more than 3,500 people are dying each week. "So all of these things show what terrible disaster is occurring in the country."

"The Mugabe government is so corrupt that any money sent into Zimbabwe for humanitarian purposes — a lot of it is stolen by his chosen people, so you basically have to send in material goods," Carter says.

Carter says that international pressure from other African leaders may be the best and most effective way to improve the humanitarian situation, but there are problems with such methods.

"We did meet with all the leaders of South Africa, plus the leader of Botswana and others, and we learned from them that there is no process to establish a constitutional amendment that would set up the office of prime minister," Carter says. "I think if he doesn't accept this policy that is supported by the other southern African countries of sharing power in his country and alleviating this total curtain around his suffering people, he ought to be removed from office. But the first step would be to see if he will indeed, finally, share power."

Carter says there is an inherent problem in the political relationships in Africa that has led neighboring African leaders to be hesitant to press Mugabe into action.

"They are very reluctant to condemn Mugabe because he has been a hero in southern Africa, because he was instrumental in overthrowing a racist regime, and he has also helped other nations nearby," Carter says. "The key country that could bring him down is South Africa. So we hope that with this massive wave of publicity, that there will be additional pressure on these African leaders to demand that Mugabe either comply with their agreement or be removed from office."

A military option to forcefully remove Mugabe would be a final, last resort, Carter says. "Maximum pressure by his own peers is what is necessary to bring him down. And I think that if South Africa and the other 13 nations would demand that Mugabe step down, he would have to do it."