Accessibility links
At MOMA, a Multi-Ton Moving Day The Museum of Modern Art is setting up a Richard Serra retrospective — which means getting his immense steel structures into the building. 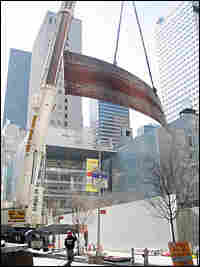 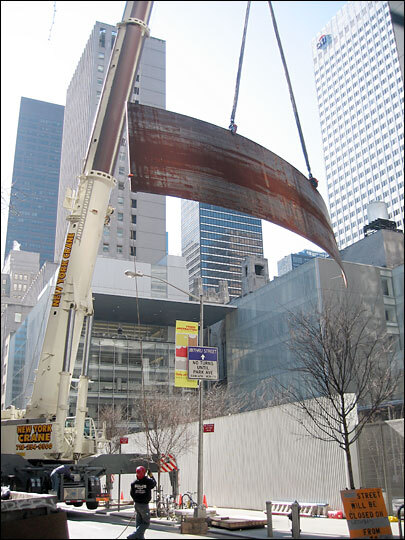 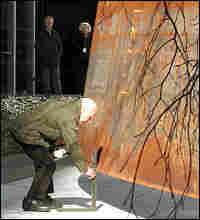 Serra positions one of the plates of Intersection II in MoMA's garden. Daniela Stigh hide caption 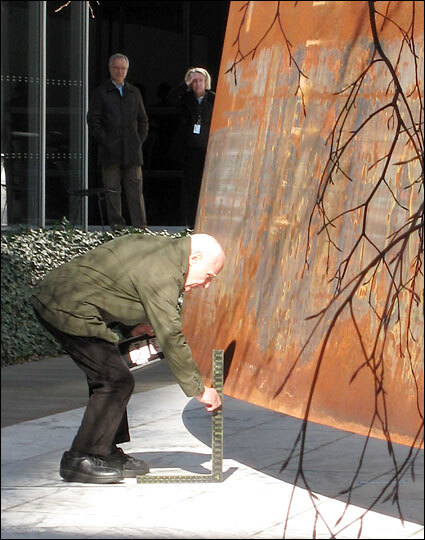 Serra positions one of the plates of Intersection II in MoMA's garden.

If you've ever tried to carry a sleeper sofa up a stairwell, you know that moving day is no fun. Now imagine what it's like for the Museum of Modern Art in New York: All this month, they're hoisting massive sculptures, some weighing up to 200 tons, into the building for a retrospective of artist Richard Serra.

On 54th street in Manhattan, it looks like a supertanker has dropped from the sky. Plates of curved rusted metal, some the size of billboards, litter the lot next to the museum. Tourists don't know what to think.

"Originally, we thought it was a big tank or something," says Bill Monnig, a visitor from Cincinnati who's snapping pictures as a crane hoists one of the steel plates over the wall of the museum courtyard. "We couldn't imagine it being on the top of one of these buildings."

Inside, workers lower the massive plate inch by inch — and then it's down, no sound, no clank whatsoever. They've handled it like a newborn.

"When you are moving hundreds of tons around, you can't be off," says Serra, who's kneeling in the courtyard next to his big baby. He says his crew takes no chances — not since an early incident, back in the 1970s. A worker was crushed in Minneapolis when one of Serra's artworks toppled over on him.

Not only is Serra present for every step of an installation these days, but engineers even designed the new MOMA building specifically to hold the sculptures' weight. This week, the museum knocked out a series of walls on the second floor and opened up the side of the building to get some of the works indoors.

All that work was supervised by Joe Valardi, whose rigging company usually installs boilers and massive air-conditioning units. He's the only man Serra trusts to lift his art.

"This is a piece of steel, but we treat it like glass," Valardi says. "Try and make minimal marks. Protect our surroundings."

Realizing an artistic vision in the real world is more of a challenge with Serra than with most artists, of course. Surely one day Valardi will have to tell Serra that something simply can't be done.

"We've said that to him," Valardi confesses. "But his sculptures are his sculptures, and they have to get done. Somehow we figure out a way."

There's always a glitch, though. On this day, Valardi's crew is having trouble removing the giant clamps used to hoist the artwork. So a guy with a sledgehammer goes to town on it, while tourist Bill Monnig offers a suggestion.

"They need a big bottle of WD-40 to loosen this piece up," he says.

One more bang and they get it free. The crowd applauds — and they didn't even have to wait for the exhibition's opening in June to see the show.

Richard Serra at the Museum of Modern Art