Accessibility links
Is Reducing Carbon Emissions Worth The Cost? Addressing climate change on a global, governmental level is still a matter of heated debate. A panel of six experts recently took on the issue as part of the Intelligence Squared U.S. series.

Is Reducing Carbon Emissions Worth The Cost?

Is Reducing Carbon Emissions Worth The Cost? 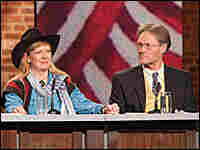 L. Hunter Lovins (left) and Oliver Tickell were among the panelists debating whether major reductions in carbon emissions are worth the cost. Kevin Wick/Longview Photography hide caption 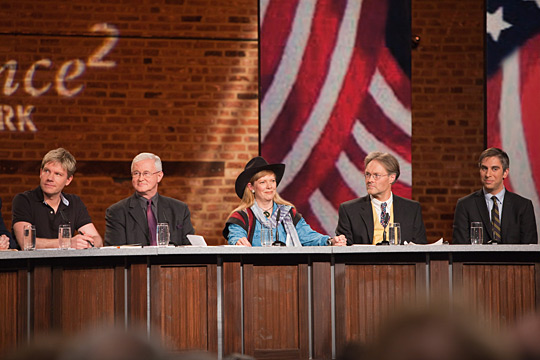 On Feb. 3, panelists debate the proposition "The Art Market Is Less Ethical Than The Stock Market." 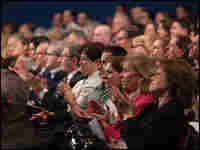 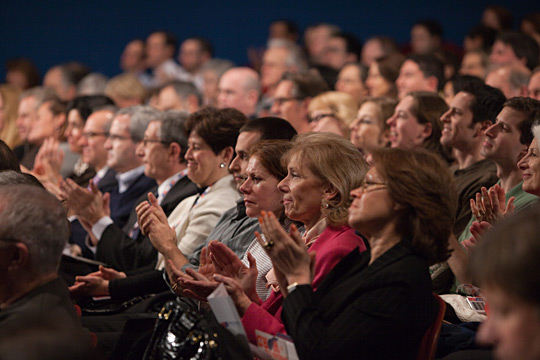 With potentially staggering costs involved, are efforts to make major reductions in carbon emissions even worth it? Would the money be better spent elsewhere? Or, does the amount of money involved become less important when considering the possible consequences of climate change?

A panel of experts recently took on these questions in an Oxford-style debate. The motion for the Jan. 13 debate, part of the Intelligence Squared U.S. series, was: "Major Reductions in Carbon Emissions Are Not Worth the Money."

John Donvan, correspondent for ABC News' Nightline, was moderator for the evening. Those debating were:

Peter Huber, the co-author of The Bottomless Well, is a partner at the Washington, D.C., law firm of Kellogg, Huber, Hansen, Todd, Evans and Figel, a senior fellow at the Manhattan Institute and a columnist for Forbes.

Bjorn Lomborg, the author of Cool It and The Skeptical Environmentalist, is an adjunct professor at the Copenhagen Business School. In 2004, he began the Copenhagen Consensus, a conference of top economists who come together to prioritize the best solutions for world problems.

Philip Stott, professor emeritus and a biogeographer from the University of London, was the editor of the Journal of Biogeography for 18 years.

L. Hunter Lovins is president of Natural Capitalism Solutions, which creates practical tools and strategies aimed at enabling companies, communities and countries to increase prosperity and quality of life. Lovins consults for industries and governments globally.

Oliver Tickell is the author of Kyoto2, in which he sets out an international framework for the control of greenhouse gases in the atmosphere intended to be effective, efficient and equitable.

Adam Werbach, global chief executive officer at Saatchi & Saatchi S, a sustainability consulting division of Saatchi & Saatchi, is regarded as one of the world's premier experts in sustainability. At age 23, he was elected as the youngest president ever of the Sierra Club, the oldest and largest environmental organization in the United States.