Accessibility links
Jia Zhangke: Capturing China's Transformation Critic John Powers says the beautifully shot films of Chinese filmmaker Jia Zhangke register what's getting lost in China's transformation — and why Jia is one of the most eminent directors of our time. 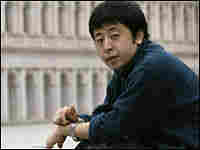 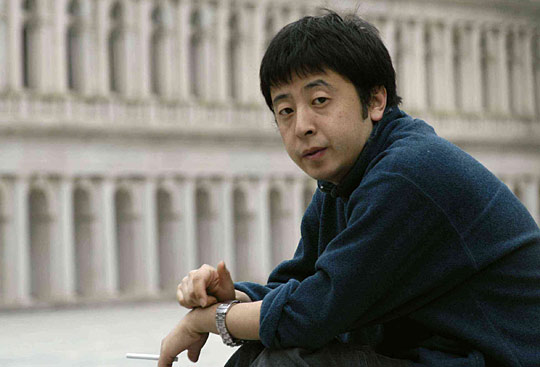 Director Jia Zhangke rests on the set of The World. 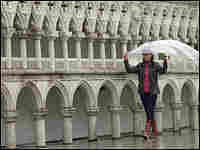 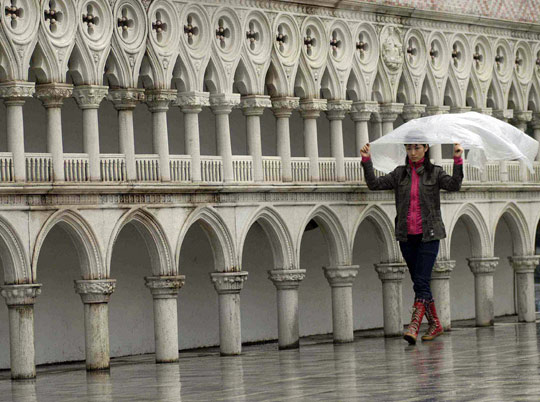 Back in August, the Beijing Olympics opened with a dazzling, pyrotechnic ceremony that showed us China as its leaders would like us to see it –- a prosperous, unified, modern country that is able to do anything.

There is, of course, another, less glamorous China, and that's the one you see in the work of Jia Zhangke, who may well be the most important filmmaker working in the world today. Now 38 years old, Jia has spent his life watching China go from being a backward Maoist nation to a booming, capitalist country that is equal parts police state and Wild West. This is the biggest and fastest social transformation ever, and Jia's movies — which mix fiction and documentary — have the immediacy of bulletins from the front lines of history.

Jia's gifts are on display in his acclaimed fifth feature, Still Life, which is just out on DVD. It's set in Fengjie, a town along the Yangtze River that is about to be covered with water from the Three Gorges dam, a huge project that has displaced millions of people.

The story, such as it is, couldn't be simpler. We follow two people who have both come to Fengjie looking for their lost spouses. One, Han Sanming, is a coal miner searching for the wife he bought 15 years earlier. She had a daughter and left him. The other, Shen Hong, is a nurse seeking out the husband who went to Fengjie to work two years earlier and simply stopped communicating with her.

These two searchers spend most of the movie wandering around the town and meeting the locals — a grumpy ferry worker, a magician who turns euros into Chinese money, a big shot who takes pride in having the lights on a bridge turned on by making a phone call. With rare exceptions, the people we see are not the beneficiaries of China's economic boom. They are part of the vast majority. They work menial, often dangerous jobs in a country where money rules and the Party bosses make the life-or-death decisions.

Jia is a great director, and much of Still Life's power comes from the way he depicts his characters moving through the landscape — an environment of crowded ferries, collapsed buildings, small rooms with TVs blaring, and huge construction projects looming in the background.

That may sound grim, but the movie is incredibly beautiful. Jia's eye for composition recalls Antonioni in its rigor and poetry, but he isn't after mere pictorial splendor. He wants us to see how the landscape defines his characters' lives, how small and alienated individuals feel in relation to the gargantuan size of Chinese development.

This is true of all of Jia's work, which takes us places nobody else does. His movie The World is set at a kitschy Beijing theme park whose young employees are surrounded by miniature versions of iconic tourist sites, like the Eiffel Tower, that they could never afford to visit. His current film 24 City is a documentary about an old factory created during the Maoist era that is being flattened and replaced with luxury high-rises, a project that not only throws thousands of ordinary people out of work but also erases a whole city's sense of its past.

Naturally, Jia wouldn't deny that China is getting more prosperous. But he wants to register what's getting lost in this great leap forward — a sense of place, a sense of community, a sense of social equality. Just as it's no consolation to our endangered auto workers that hedge fund managers made billions in the real estate bubble, so it's no comfort to Still Life's characters to know that the dam waters that will wash away their homes will provide lots of electricity for some Gucci store in Shanghai.

Like all of Jia's movies, Still Life is both a compassionate portrait of ordinary people scrambling to survive warp-speed change, and a record of cultural memory. He is making a sustained effort to capture the precise moments when China's past is being tossed on the ash heap of history. While this might seem like an obvious thing to do, it's worth noting that Jia has no real peers. There is no filmmaker like him in India or Russia or Brazil. For that matter, we don't have one in America, either. Where is the great movie about what's happening in Detroit?

It's always hard to foresee how the future will judge today's artists, but I do feel confident predicting one thing. In 100 years, people will still be interested in the films of Jia Zhangke, and I'm not sure I can say that about Twilight or Slumdog Millionaire.