Accessibility links
Coping With An Autistic Brother: A Teenager's Take Each year, about one child in every 150 is diagnosed with autism. Eleven-year-old Andrew Skillings has Asperger's syndrome, a mild form of autism. Andrew's older sister, Marissa, talks about how she copes with her brother's meltdowns — and how she protects him from the other kids.

Listen
Coping With An Autistic Brother: A Teenager's Take 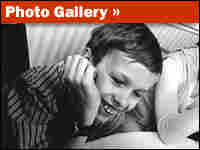 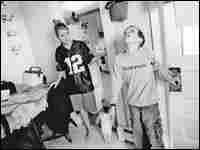 Eleven-year-old Andrew enters the Skillings' house after walking through mud, while his older sister, Marissa, looks on, worried he might have a meltdown. Courtesy of the Salt Institute/Erica Burkhart hide caption 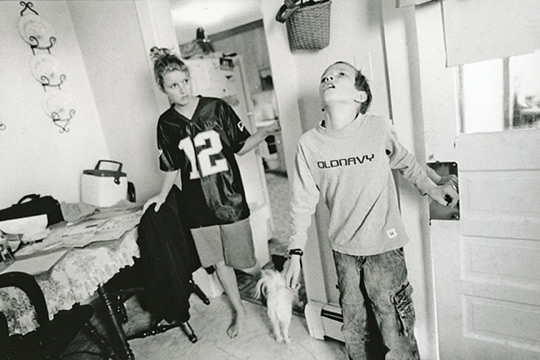 Eleven-year-old Andrew enters the Skillings' house after walking through mud, while his older sister, Marissa, looks on, worried he might have a meltdown.

Courtesy of the Salt Institute/Erica Burkhart

Each year, approximately one child in every 150 is diagnosed with autism. Eleven-year-old Andrew Skillings is one of those children. He has Asperger's syndrome, a mild form of autism.

For Andrew's older sister Marissa, her brother's diagnosis has affected every aspect of her life from the time he was born. She was almost 5 and shared a room with Andrew. Marissa says she remembers those first few weeks he was home.

"I decided he needed to go back where he came from, because as a baby he never, ever stopped screaming," she says.

Then the Skillings found out Andrew had a mental disability.

Recently, Marissa described what it's like to live with a little brother who has frequent meltdowns — and who she tries to protect.

"I'd kill for him. But I could kill him, too. He talks. Nonstop. Talking and talking," Marissa says. "He'll tell anybody information about an animal, whether they want to hear it or not. People can tell Andrew has a disability because of his hand gestures and the way he moves when he gets nervous.

"He moves his hands back and forth; and he'll walk with his hands down by his sides just shaking his hands; and he likes to crack his knuckles when he's nervous, and he'll keep doing the movement even if they don't crack."

As Marissa says, their sibling relationship is different from "two normal siblings" because of his autism.

"Because socially he needs help, so I have to protect him and be there for him more than a normal big sister would," she says. "He freaks out, like if I won't get out of the bathroom and I tell him to shut up, he'll grab a kitchen knife and come over to the door and open the door and chase me around the house with a knife. I know he'd never touch me with it, but when he's running with a knife pointed towards me and I'm running, if he tripped, then something bad could happen."

Marissa says she stays out with her friends until her curfew so she can avoid dealing with her brother's disability.

"I started staying away from home around 5 or 6," she says. "I'd stay outside or at a friend's as late as I could until my mom called me home. I can sit down and talk with my parents, but a lot of times, it's like Andrew's always trying to explain something about a cheetah or a jaguar or something in the jungle that has no importance on anyone's life. But if I interrupt him, he gets mad and then it turns into a tantrum and my mom gets mad, and I'm just like, 'I don't even want to talk to you guys anymore.' "

Marissa says she has seen kids tease Andrew, and it's not unusual at his age. One day, she says, a boy was throwing rocks at Andrew. Andrew tried to shield himself with cardboard, but a rock flew over the cardboard and hit him in the head. Andrew ran into the house crying, and when Marissa found out what happened, she chased the boy down the street and cornered him.

"I smacked him across the face and he was cornered, and my face I'm sure was beet-red, and I was like, 'Just do it again and I'll punch you right in your mouth,' " Marissa says. "I was mad because no one can beat up my brother except me."

"Sometimes, if I get really frustrated, I just wish I could change everything: Sell him to the zoo and buy new parents," Marissa says. "But then the times when I'm actually appreciating things and I'm not in the moment when I'm steaming mad, I do appreciate what I have."

"I don't think I'd change anything, 'cause this is my life and this is what I'm used to. Andrew wouldn't be like the Andrew I know and love if he was different, because autism is his whole personality."