Accessibility links
The Stupidest Statistics In The Modern Era You don't have to read the box scores to know that statistics are a big deal in sports. But lately, commentator Frank Deford has noticed a glut of meaningless sports statistics.

Listen
The Stupidest Statistics In The Modern Era 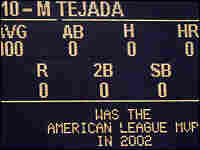 It's Always Something: The first game of baseball season brings a field of zeroes — and mention of a 6-year-old MVP award. Donald Miralle/Getty Images hide caption 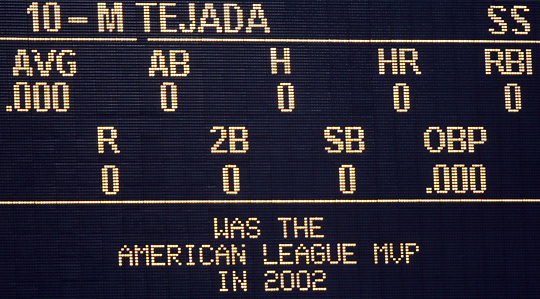 It's Always Something: The first game of baseball season brings a field of zeroes — and mention of a 6-year-old MVP award.

Lord knows, we are inundated with sports statistics. Baseball is the worst, of course — but it's getting harder for the statistics freaks in all sports to dream up anything original. And so I began to notice that a whole new category of stupid records was being created.

A record should be one simple, outstanding thing, i.e., Wilt Chamberlain scored the most points in one game: 100. Thank you, QED, next.

But these new idiotic records combine two or more disparate numbers to make what only sounds like a very important point. Here are some actual examples I've come across:

He's the first teenager in the last 33 years with three triples and two intentional walks in one season.

Now just stop. Have you ever heard any fan say, "Well, one thing about Joe, he's a valuable guy because he hits triples and gets intentional walks?" Of course not. So, next:

He was the second quarterback since 1970 to complete less than 30 percent of his passes and throw four interceptions in a victory.

And hey, if you're going to talk about the past, for it to mean anything, you have to stick to round numbers. But not any more.

You gotta stand in awe of whoever figured that out.

A combination of doubles and stolen bases? How 'bout hit by pitcher and sacrifice flies?

He's the first National League player to account for as many as 30 steals and 25 double plays in one season.

Steals and double plays together? This is like saying, "He's the first archaeologist to find 23 dinosaur bones and 12 Spanish doubloons on the same hunt."

Imagine the time it takes to find these goofy combinations.

Only five clubs in the wild-card era have trusted 15 starts to three 23-and-under pitchers.

He is the first pitcher in 24 years to win 70 percent of his decisions while logging more strikeouts than innings pitched.

His 5.17 ERA was the fourth worst in National League history by a left-hander with at least 200 innings.

And finally, I say:

These are the stupidest combination numbers stuck together by anyone over the age of 17 who speaks English since 1914.