Accessibility links
10-Year-Old Makes Plea To Interview Obama Since September, Damon Weaver has been creatively finding ways to get Obama's attention for an interview — even enlisting Miami Heat basketball players' help. The fifth-grader from Pahokee, Fla., who has interviewed Joe Biden and Caroline Kennedy, tells NPR what he would ask Obama first. 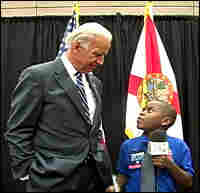 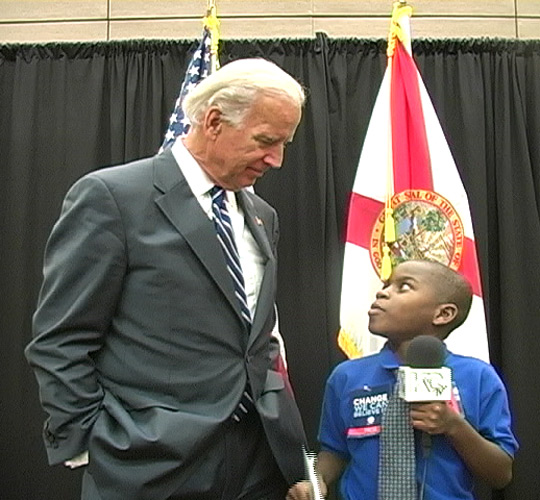 People who listen every day, every hour to NPR may have noticed that it has not had an interview with President-elect Barack Obama in months.

In many ways, NPR is in the same straits as 10-year-old Damon Weaver of Pahokee, Fla., who has made creative pleas since September to interview Obama.

If he were to get an interview with Obama, Damon tells NPR's Robert Siegel, he already knows what he would ask him first.

"My first question I would ask him is: 'In my town Pahokee, I have seen a lot of shootings and fights, what are you going to do about violence and to keep me safe?'" Damon says.

To spread the word about his interest in interviewing Obama, Damon made a YouTube video that lays out why Obama should let him.

Damon enlisted Miami Heat players Dwayne Wade and Shawn Marion to help make his case. In interviews, he asked the basketball players if they would play one-on-one with Obama and let him win if Obama agreed to let Damon interview him. According to Damon, Wade said, "No can do, kid."

Aside from the YouTube videos, Damon also made a big sign that read "Can I interview you?" and waved it at an event for Obama at the University of Miami.

"I don't believe he saw it, but I didn't get an interview," Damon says.

As for how he got interested in doing interviews, Damon says, "At my school we have a news studio and the first day of school I wanted to be on TV, which I did, and I thought I looked good on TV."