Accessibility links
The Best Laid Plans Of Mines And Men With the economic downturn, the global demand for minerals has decreased. For mining towns like Leadville, Colo., that has meant shelving plans to reopen a nearby molybdenum mine.

Listen
The Best Laid Plans Of Mines And Men

The eighth installment of an occasional series called "The Money Map," which looks at how global economic forces are shaping the economies of America's hometowns. 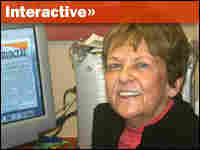 In the late 19th century, silver mines put Leadville, Colo., on the map. Although the silver boom eventually went bust, another mineral — molybdenum — proved to be profitable for this mountain town southwest of Denver.

At one point, the nearby Climax mine produced close to 75 percent of the world's molybdenum, which is used as a hardening agent for steel in cars, as well as in computer chips and monitors. But the mine closed in the 1980s — a major blow to Leadville's economy. Recently, however, demand for molybdenum had increased in countries such as India and China.

Kirk Siegler of member station KUNC tells NPR's Steve Inskeep that the people of Leadville began to anticipate an economic resurgence that would come with the reopening of the Climax mine.

The editor of the Leadville Herald Democrat, Marcia Martinek, says expectations swelled. "We had a lot of construction workers in town last summer, and they were, you know, eating in our restaurants and staying in our hotels. ... So we had a real boost to the economy: Our sales tax was up, our lodging tax was up, which is great."

And then molybdenum prices plummeted as the crippling trickle-down effects of the global financial turmoil hit the mining industry.

Word came that the Climax mine would remain shuttered, and all of the contract employees who had been preparing for the mine's reopening lost their jobs. Another nearby molybdenum mine laid off about 30 percent of its work force. In fact, mines all over the region are facing similar problems.

For the roughly 2,800 citizens of Leadville, the sudden reversal of fortune has proved disappointing.

"I would have to say most of us say it sucks — just plain and simple, it sucks," says Rochelle Basher, who manages the Delaware Hotel. "It's something that we were looking forward to. It was going to bring in additional income, people in town were getting excited, and then it gets pulled out from under us."