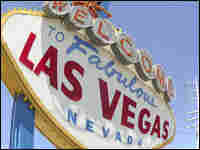 In Las Vegas, the odds of dying by suicide are strikingly high — twice as high as in the rest of the country. And the neon city is a risk for residents and visitors alike, according to a study in the current issue of the journal Social Science and Medicine.

Matt Wray lives in Philadelphia and works as a sociologist at Temple University. He used to live in Las Vegas, and says he was struck by the city's historically high suicide rate of about one suicide per day.

It made Wray wonder whether exposure to the city of Las Vegas — not just its gambling casinos, but the whole town — increases the risk of suicide. It was a question he and colleagues from Harvard University tackled by looking at 40 million death records from across the country, spanning 30 years.

Suicide records tell you not only how someone died, but where — whether at home, out of town or out of state.

"So we're comparing, in this case, Las Vegas to every place else," Wray said.

Indeed, researchers found that residents of Las Vegas had a 50 percent higher risk of suicide than folks living elsewhere in the country. They also found out something quite surprising about the residents.

"Residents of Las Vegas who leave Las Vegas — that is, they take some kind of hiatus or break from Las Vegas, they go out of the county — their risk for suicide goes down," he said.

And it turns out that the 40 million visitors who come to Las Vegas every year had an even greater suicide risk than residents.

"We found that those who visit Las Vegas compared to visiting elsewhere see their risk going up by twofold," Wray said.

So leaving Las Vegas decreases the risk of suicide, and living there or visiting increases the risk. One explanation, Wray says, could be the fast-growth, boomtown nature of Vegas.

"You've got transients; you've got massive population growth and demographic change. This certainly is what characterizes the last 25 or 30 years of Nevada's history," he said.

Such rapid growth can lead to a lot of social isolation and a lack of community cohesiveness. Although this might explain the elevated suicide risk among residents, it doesn't explain the even higher suicide rate among visitors to Vegas.

Suicide researcher Morton Silverman from the University of Chicago suggests another possible explanation.

"Those who are predisposed to suicide disproportionally choose Las Vegas to either reside in or visit. So Las Vegas would then be a destination for individuals who are suicidal," Silverman said.

Mike Murphy has lived in Vegas for nearly 30 years. He's the county coroner there, investigating every death and suicide. Visitors to Vegas who kill themselves there, he says, are generally not reacting to gambling losses.

"The vast majority of those that came to Las Vegas did not come here and lose their money and then commit suicide," Murphy said. "They came here with the idea of making their last kind of 'hooray,' and then they took their lives. And they did it so that they wouldn't be doing that at home where their family members would find them; they were going to another location."

He's also noticed something else within the past several months.

"We are seeing a few more incidences of what we call homicide-suicides, where someone takes the life of a significant other and then their own life. And you have to look at that and say, is that a direct result of what we're seeing economically? Is it a result of a foreclosure? Is it a result of the aging community and the health issues and concerns for those folks? I don't know yet," he said.

No matter what the causes for the exceptionally high rate of suicides among Las Vegas residents and visitors alike, Wray says proven preventive measures should be reinforced in Vegas, such as training doctors to better recognize the symptoms of depression and suicidal behaviors, and safeguarding access to guns — the most common method of completing suicide.