Accessibility links
Obituary of Eddie Clontz, From 'The Economist' Eddie Clontz described himself not as an editor but as a circus-master, drawing readers into his tent with an endless parade of fantasies and freaks.

Obituary of Eddie Clontz, From 'The Economist'

Obituary of Eddie Clontz, From 'The Economist' 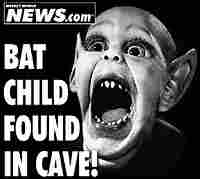 "The News reported that a bat boy, with huge ears and amber eyes and "eating his own weight in insects each single day", had been found by scientists in a cave in West Virginia." Bloomberg Press hide caption 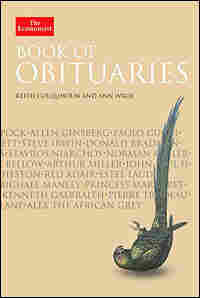 The relationship between truth and reporting has ever been a tricky one. No scene remains undistorted as it passes the eye of the beholder, and none reaches the page exactly as it was. But while living with this discrepancy, many journalists struggle with a much baser temptation. What they really want to put into their copy is that extraordinary "fact", that jaw-dropping story retailed by a single source down a crackling telephone line, which would earn them a banner headline if they could only stand it up.

Eddie Clontz felt this more than most, and he never resisted the temptation. As the deviser and, for 20 years, the editor-in-chief of Weekly World News, his delight was to run the wildest stories he could find. He described himself not as an editor but as a circus-master, drawing readers into his tent with an endless parade of fantasies and freaks.

The News had, and has, an unassuming look, a black-and-white tabloid with blurry graphics that sits at supermarket checkouts across America, among the chewing gum. But its headlines, in inch-high sans serif, are another matter. "ARCHEOLOGISTS FIND MIDDLE EARTH IN NEW JERSEY SWAMP!" "SEVEN CON GRESSMEN ARE ZOMBIES !" "TINY TERORISTS DISGUISED AS GARDEN GNOMES !" ("These guys are typical al-Qaeda operatives,' says a top CIA source, 'with beards down to their belt buckles'.") Such stories, all from one recent issue, would have made Mr Clontz proud.

The News for which he was hired, in 1981, was a sorry affair, a dumping ground for stories that failed to make the National Enquirer. It had been started mostly to make use of the Enquirer's old black-and-white presses after the sister-tabloid had gone to colour. Mr Clontz soon shook it up. Out went the tired celebrity gossip; in came space aliens, dinosaurs, giant vegetables, and a "Psychic" column in which his brother Derek would find readers' car keys. Circulation soared. In a good week, it can reach well over a million.

Two stories in particular got Mr Clontz noticed. In 1988, his organ revealed that "ELVIS IS ALIVE! (King of Rock 'n' Roll Faked his Death and is Living in Kalamazoo, Mich!)". A few years later, the News reported that a bat boy, with huge ears and amber eyes and "eating his own weight in insects each single day", had been found by scientists in a cave in West Virginia.

Both items were followed up for years. Elvis went on appearing; Bat Boy escaped, was recaptured by the FBI, fell in love and endorsed Al Gore for president. Readers wrote in with their own sightings, bolstering whatever truth the nation believed was there. In 1993, Mr Clontz dared to kill the resurrected Elvis ("ELVIS DEAD AT 58!") – only to reveal some time later that this death, too, had been a hoax.

Scallops to scoops
Sheer chance seemed to bring Mr Clontz to this strange outpost of journalism. After dropping out of school at 16 and trying his luck as a scallop fisherman, he became a copy boy on his local paper in North Carolina. He moved next to a Florida paper, and from there to the disreputable corner office in the Enquirer building, in a run-down resort near Palm Beach, from which he was to entertain and terrify America.

His own politics were mysterious. Under the pseudonym "Ed Anger", he wrote a News column so vitriolically right wing that it possibly came from the left. Anger hated foreigners, yoga, whales, speed limits and pineapple on pizza; he liked flogging, electrocutions and beer. No, Mr Clontz would say, he had no idea who Anger really was. But he was "about as close to him as any human being."

Mr Clontz also always denied that his staff made the stories up. It was subtler than that. Many tips came from "freelance correspondents" who called in; their stories were "checked", but never past the point where they might disintegrate. ("We don't know whether stories are true," said Mr Clontz, "and we really don't care.") The staff also read dozens of respectable newspapers and magazines, antennae alert for the daft and the bizarre. When a nugget was found, Mr Clontz would order them to run away with it, urging them to greater imaginative heights by squirting them with a giant water-pistol.

Yet he also showed care for authenticity. If a story resisted tracking down, he would give it the dateline "Bolivia". If it relied on "scientific research", he would make sure the scientists were Bulgarian. Writers who made up the names of Georgia natives terrorised by giant chickens would be asked to check in the telephone book to make sure they did not exist. Loving editorial attention was given to the face of Satan when he appeared in a cloud formation over New York.

The result of this was that many readers appeared to believe Mr Clontz's stories. Letters poured in, especially from the conservative and rural parts of the country where Ed Anger's columns struck a chord. If a sensible man like Anger kept company with aliens and 20-pound cucumbers, perhaps those stories too were true. When the News reported the discovery of a hive of baby ghosts, more than a thousand readers wrote in to adopt one. But the saddest tale was of the soldier who wrote, in all seriousness, offering marriage to the two-headed woman.

Excerpted from 'The Economist' Book of Obituaries edited by Kieth Colqhoun and Ann Wroe. Copyright © 2008 by The Economist Newspaper Ltd. Excerpted by permission of Bloomberg Press. All rights reserved. 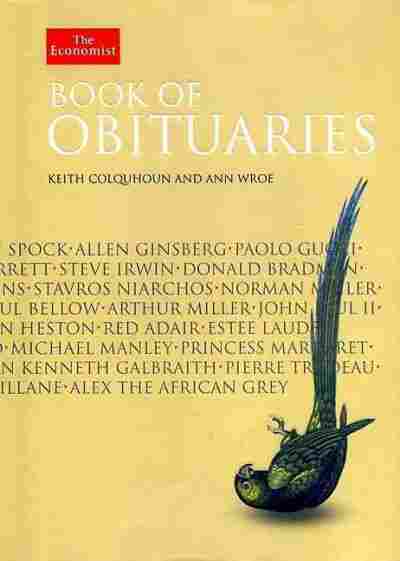 The Economist Book of Obituaries

by Keith Colqhoun and Ann Wroe