Accessibility links
Court Weighs 'Extraordinary Rendition' Case An appeals court heard arguments in the case of Maher Arar, a Canadian citizen who was arrested in New York and sent to Syria for interrogation. Arar is seeking permission to sue the U.S. government for violating his right to due process.

A federal appeals court in New York heard arguments Tuesday in the case of Maher Arar, a Canadian citizen who was flown from the U.S. to Syria for interrogation in a case of "extraordinary rendition."

Arar wants to sue the U.S. government for violating his constitutional right to due process — something he has not been permitted to do thus far because the Bush administration has said to do so would imperil national security.

The facts of the case are not in dispute. In 2002, U.S. authorities detained Arar at John F. Kennedy airport in New York. He was suspected of terrorism ties and was sent to Syria for interrogation. Arar spent 10 months there in a cell he called the "grave." He says he was tortured.

Eventually, Arar was allowed to return to Canada and a Canadian commission cleared him of all charges. Secretary of State Condoleezza Rice has even said mistakes were made in Arar's case.

"So the minute the executive raises the specter of foreign policy, national security, it is the government's position that is a license to torture anyone?" Judge Sonia Sotomayor said. "License meaning you can do so without any financial consequence. That's your position?"

Cohn said he thought the court should wait until Congress acted and found a new way to address these kinds of cases so that they could be tried but still protect national security interests. This was not a normal case, he said, because state secrets were at its root.

So far, two courts have blocked Arar's case from being heard, siding with the Bush administration that it could unintentionally reveal things that would hurt national security. That's why Tuesday's hearing was important and why all 12 judges on the court heard the arguments.

Something Fundamental At Stake

Maria LaHood of the Center for Constitutional Rights argued on behalf of Arar. She said the judges were weighing something fundamental.

While this was Arar's big day in court, he couldn't attend the hearing because he is still on a no-fly list and can't come to the United States.

Arar told NPR's Morning Edition that he was pursuing the case because no U.S. officials had been held to account for violating his human rights.

"This needs to stop," he said. "Not only is it destroying the lives of innocent people, but it's not doing any good to the image of the United States."

It is unclear when the judges are expected to rule on his case. 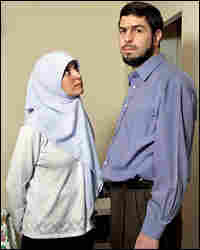 A federal appeals court in New York will hear arguments today in the case of Maher Arar, a Canadian citizen who was detained on a layover at JFK International Airport in 2002. The U.S. government accused him of being an al-Qaida member and sent him to Syria for interrogation.

No charges were ever filed against Arar. The lawsuit he is now pursuing charges that the U.S. government violated his right to due process, as well as his right to choose a country of removal other than one in which he might be tortured. A version of his lawsuit has already been thrown out by a U.S. court.

Arar told NPR's Renee Montagne that he hopes his case will highlight human rights abuses in situations like his. He also described to her his rendition — and the months he spent in a Syrian jail.

"The first day I arrived there, they interrogated me for about four hours," Arar said. "After that, they took me to a basement, and they locked me up in a small cell" measuring around 3 feet wide by 6 feet deep.

Arar thought that he would only be in the dark and cramped cell for a short time — a way for his questioners to apply some pressure to him. But, he says, "That place, which I eventually called 'the grave,' ended up being my home for the next 10 months and 10 days."

He was beaten regularly, Arar says, and his questioners kept asking him about Afghanistan — and the beatings intensified. On the second and third day, Arar says, his interrogators began hitting him with segments of electrical cables, about 1 1/2 to 2 inches thick.

"At the end of that day, I just couldn't take it, and I told them what they wanted to hear," Arar said — he told them that he had been to Afghanistan.

Asked by Montagne if he had in fact been to Afghanistan, Arar said, "No."

But his captors were glad to hear him say he had been there, Arar recalls. "They started smiling right away, and they became very happy. This did not stop the torture completely. But I could tell you, the torture became less severe."

The evidence against Arar came from Canadian police. The Canadian government has formally apologized to Arar for its part in his case; Secretary of State Condoleezza Rice has also acknowledged that mistakes were made in handling it.

But Arar says that the biggest factor in his eventual release from a Syrian prison was the work his wife did. She pressured the Canadian government to reveal what had happened to her husband — and to have him regain his freedom. Eventually, then-Prime Minister Jean Chretien sent a letter to the Syrian leader asking that Arar be released.

"Had she decided to stay quiet, I think I would still be in prison today," Arar said.

Asked about his hopes for his lawsuit against former Attorney General John Ashcroft, FBI Director Robert Mueller and former Homeland Security Director Tom Ridge, Arar said that no U.S. official has been held accountable for violating his human rights.

And, he said, there are "hundreds, maybe thousands, of innocent people that have been rendered" — or detained and turned over to a foreign government in violation of their rights of due process.

"This needs to stop. It's more than me," Arar said. "It's about time to stand up to this administration and say, 'This is wrong.' "

Despite his release and return to Canada — and extracting both an apology and a settlement from the Canadian government — Arar says that he is still recovering from his ordeal.

"Looking back at the old person I was, and the person I am right now, I'm not the same. And this is what I want the American people to understand, that torture is not just about physical torture."

The mental effects, Arar said, far outlast the physical wounds. And chief among them, he said, is a lack of confidence and a fear of the unknown. And then, he said, there are the memories and nightmares.

"Can I go back to the same person I was?" Arar asked. "I have doubts right now about that."