Accessibility links
A Jazz Great Finds Rock's Rhythmic Abandon Tenor saxophonist Joe Henderson's brilliant Power To The People was recorded in 1969, when jazz musicians were confronting the influence of rock and soul. Some had trouble, but Henderson wrote tunes that always sneaked a step or two beyond convention. 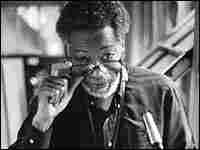 The era in which Power to the People was made is considered a high-water mark, a moment when jazz musicians incorporated elements of pop without trafficking in endless cliches. What other releases share the disc's sensibility? 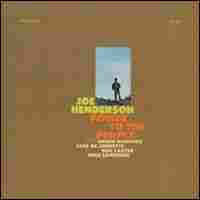 These days, when jazz labels take the trouble to release a reissue, it's usually a classic recording or a known big seller. The new series known as the "Keepnews Collection," supervised by veteran producer Orrin Keepnews, offers a few of those — Wes Montgomery's revered Full House resides among the inaugural titles. In a twist, the series also includes one of the oft-neglected, should-have-been-huge releases of the late '60s: tenor saxophonist Joe Henderson's brilliant Power To The People.

Power came years after Henderson's best-known works as a leader, the Blue Note gems Mode For Joe and Inner Urge. It was recorded in 1969, during a time when jazz musicians were regularly confronting the influence of rock and soul music. Some had trouble translating their ideas to the more "modern" sound. Henderson, though, wrote tunes that always sneaked a step or two beyond convention, and here, his compositions thrive on an agitated rhythmic abandon that's part rock and part free jazz — for example, try the fractured boogaloo "Afro-Centric" (audio), which is far too hip to be called jazz fusion. The accompanying players, described by Keepnews in new liner notes as "quite close to a perfect rhythm section," include pianist Herbie Hancock and drummer Jack DeJohnette, who'd worked in the electric bands of trumpeter Miles Davis as well as bassist Ron Carter, an alum of the last great acoustic Davis band. Hancock splits his time between acoustic and electric pianos; on the opening waltz "Black Narcissus" (audio), his sustained chords emphasize the placid side of the Fender Rhodes electric.

Henderson (1937-2001) is clearly inspired by these players; his odd-shaped squiggly phrases on "Black Narcissus" seem to spring, fully formed, from the capricious quips Hancock tosses out in the background, as though he's filling in the pianist's sketchy thoughts. More of that flowing conversation takes place on the ballad "Lazy Afternoon" (audio), the album's most "traditional" selection, a showcase for Henderson's unique burnished-wood tenor sound.

Power to the People attracted positive notices when it appeared, but wasn't exactly a commercial ball of fire. It may have been too far ahead of its time: The idea of jazz intermingled with traces of popular music was still novel, if not radical, and it's possible that even adventurous ears weren't ready to appreciate the way Henderson and his accomplices bridged disparate worlds, or the subtle interplay the new language inspired. This is a bridge far different from the ones built by well-known fusion bands like Weather Report and Mahavishnu Orchestra. Listening now, it's easy to understand how it maybe took a few decades, and lots of schlocky fusion, for the world to appreciate its structural integrity.