Accessibility links
Post-Bankruptcy Twinkies Face Uncertain Future Interstate Bakeries, the maker of the iconic snack cake, declared bankruptcy four years ago, but a judge approved a reorganization plan last week. Now the company is trying to figure out how to market its product for a more health-conscious generation. 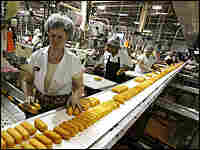 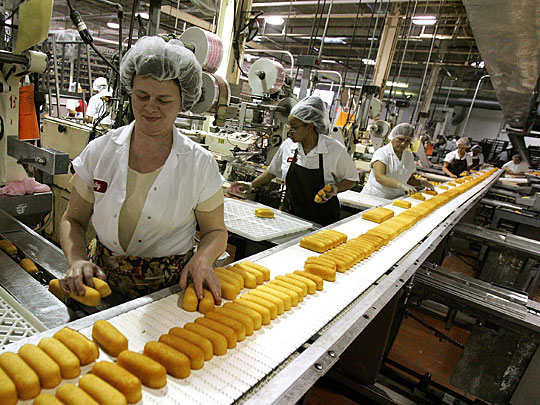 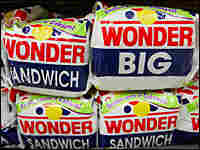 Interstate Bakeries makes such consumer icons as Hostess snack cakes and Wonder Bread, so it was a surprise when the company declared bankruptcy four years ago. On Friday, though, a federal bankruptcy judge approved a complex reorganization plan.

There is a lot of nostalgia around the Hostess and Wonder Bread brands — and optimism about the 22,000 jobs Interstate Bakeries could save. But the turnaround will not be easy.

Twinkies and Wonder Bread are more than just foods. They are the comfort and safety of your mom's PB&J waiting for you when you get home from school. They are the smell of your grade-school cafeteria as you open your lunch pail to find a snack cake inside.

For years, Interstate Bakeries dominated the marketplace. Not too long ago, the company sold 50 percent more bread than its closest competitor, according to Josh Sosland, editor of Milling and Baking News in Kansas City, Mo.

"They had a very long track record of being a very profitable and successful company," Sosland said, "so even when they had difficulties, you still saw products like Twinkies and Wonder Bread, and it was surprising to see them go into bankruptcy."

Labor battles and a resurgence of low-carb diets contributed to a downturn in sales. But the biggest problem for Lenexa, Kan.-based Interstate was the tsunami of information about diet and health. Study after study linked trans fats to heart disease, cancer and diabetes. In 2002, the Institute of Medicine suggested that "the safest amount of trans fat is none at all."

"We don't eat snack cakes or Wonder Bread," said Heidi Martin, a customer at a local grocery store. "Twinkies and Ho Hos — there's just too many preservatives in them. They've never really eaten those. But I ate them a lot when I was a kid."

Another customer, Peggy Tingle, felt similarly. "I have two children, ages 15 and 10, and I work at a pre-school, and we do not serve Wonder Bread, Twinkies or the Hostess snack cakes. Our kids don't need all of the processed white flour," she said.

Marketing experts say that in sales, perception is everything. Interstate Bakeries eventually did offer whole grain Wonder Bread as well as Twinkies with no trans fat, but people had already started reading ingredients on the labels that they did not want to eat.

How To Re-Market A Known Brand

What should a bankrupt company do? Advertising executive Brad Hanna of the Barkley company in Kansas City said one thing they are not likely to do is advertise their way out of this conundrum.

"When a brand idea becomes expired or consumers no longer see the brand as the best option, it's very difficult, if not impossible, for advertising to convince consumers otherwise," Hanna said.

Interstate Bakeries has closed 25 bakeries in the past 13 years, and sales continue to slide. Executives would not agree to be interviewed for this story, but have said they are confident that the reorganization plan will help them reclaim their place in the market.

The question is whether putting a new face on an old, even iconic, company will be enough.