Accessibility links
At 70, McCoy Tyner Still Has The Juice The jazz piano legend is celebrating his 70th birthday with a weeklong stint at the Blue Note jazz club in New York and with a new record featuring guitarists such as John Scofield and Derek Trucks. The secret to his musical longevity? "Carrot juice," he says.

Listen
At 70, McCoy Tyner Still Has The Juice 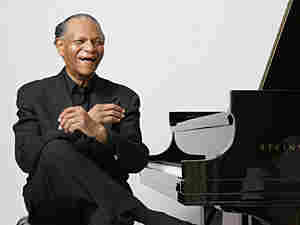 At the Bosendorfer grand piano at the Blue Note jazz club in New York, jazz pianist McCoy Tyner is trying to remember the changes to "You Taught My Heart to Sing," a ballad he wrote 20 years ago.

But if you hear Tyner play, you don't forget his sound.

"That's your identity," he says. "Your sound — it's like when you speak. You may not be able to see the person, but you recognize the voice."

Born Dec. 11, 1938, Tyner is celebrating his 70th birthday this week with a weeklong engagement at the Blue Note and a new album to boot.

He made his name as a member of the legendary John Coltrane Quartet in the 1960s. Since then, he has brought his distinctive playing style, and his compositions, to dozens of records on which he leads his own bands.

Tyner's style was forged on the piano in his mother's Philadelphia beauty shop in the decade following World War II. It was honed over the course of five years beginning in 1960, when he joined John Coltrane's band.

When Tyner met Coltrane, both were living in Philadelphia. The saxophonist was playing in Miles Davis' band. Tyner was just a teenager when the two first performed together.

"I went to his house, and you know, we got to be really good friends," he says. "I loved his playing, his sound. And so he told me, he said, 'The next time I leave Miles, I want you to join my band.' Because we did a couple of gigs together, and he liked my playing. He was like a big brother to me."

Tyner says that playing Coltrane's music was like being in a classroom.

"He used to tell me, 'Keep moving,' " Tyner says. "Harmonically. Because he was hearing a lot of different things. And I would just listen to him. And where he would go to, another key, or he would just go somewhere else. And I would try to build something harmonically under what he was doing."

"I learned so much, just about what can be done with this wonderful instrument called the piano," Tyner says.

Now, Tyner has become a teacher and an inspiration for generations of younger musicians. Some of them join him on his new recording, titled Guitars.

"He was there for some of the most profound music ever recorded," the 29-year-old Trucks says. "He was in the room, and a catalyst for a lot of it. It's an honor to be in the room with somebody like that, and to get to play with him."

Trucks is probably best-known for playing slide guitar with The Allman Brothers Band. But he remains a big jazz fan and named his daughter Naima after a Coltrane composition.

And he is a big fan of McCoy Tyner.

"He created this style — this cascading, stacked fourths — I mean, it's a beautiful sound, and it's a really forward-moving sound," he says. "His style, it's always been that way. Every time I hear him, you feel like there's a freight train coming."

The propulsive sound of Tyner's piano comes, he says, from his early days as a drummer.

It's surprising that those joints don't hurt today, given how high his hands rise up from the keys before plunging back down to create his massive chords.

"Well, I like carrot juice," he says. "I have a juice machine at home that helps. Carrot juice is real good for you. Carrot and celery. Don't forget celery."

McCoy Tyner still has the juice, at the age of 70, to write new music, and play it with passion. His mentor, John Coltrane, died at 40.