Accessibility links
'Cooking Up A Storm': Recipes From The Big Easy Marcelle Bienvenue has edited a new book with Judy Walker, Cooking Up A Storm: Recipes Lost and Found from The Times-Picayune of New Orleans. The book lists rich, authentic recipes from New Orleans residents who came together after Hurricane Katrina to preserve their culinary history.

Listen
'Cooking Up A Storm': Recipes From The Big Easy

Marcelle Bienvenue has edited a new book with Judy Walker, Cooking Up A Storm: Recipes Lost and Found from The Times-Picayune of New Orleans. The book lists rich, authentic recipes from New Orleans residents who came together after Hurricane Katrina to preserve their culinary history. 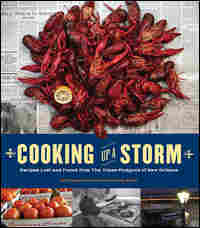 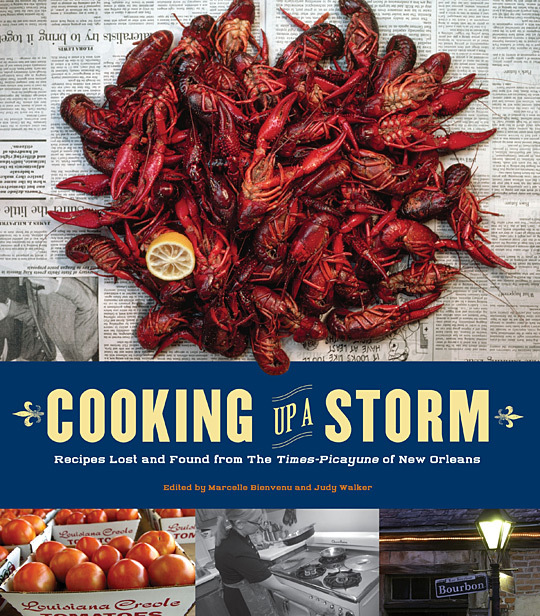 When Hurricane Katrina blew through Louisiana, all kinds of people lost all kinds of worldly possessions: photos, furniture of homes, unreplaceable mementos. They also lost another part of their heritage: cherished family recipes. And since we're talking about Louisiana, a place where food is in itself a kind of religion, losing a family's culinary heritage was cause for a special kind of sorrow. That became evident to the editors at the Times-Picayune newspaper in New Orleans. People started writing in asking for copies of recipes they'd once clipped from the paper.

An idea was born. The Times-Picayune created a recipe swap, a column they called "Exchange Alley," named for a street in the French Quarter. It was so popular that the newspaper went one step further and created a cookbook called "Cooking Up A Storm: Recipes Lost and Found from the Times-Picayune of New Orleans." Marcelle Bienvenue is the co-editor of the book, and she joins me now. Welcome to the program.

Ms. MARCELLE BIENVENUE (Co-editor, "Cooking Up A Storm: Recipes Lost and Found From The Times-Picayune Of New Orleans"): Thank you. I'm glad to be here.

NORRIS: Marcelle, you also wrote the column called "Creole Cooking," and you worked on the recipe swap there at the Times-Picayune. Throughout this process, what did you come to learn about the importance of food to people in that state?

Ms. BIENVENUE: Well, I realized, Michele, early on that if this would have happened in any other city, people would not have been writing in for their lost recipes. Food in this area, the cuisine is just such a strong part of their heritage. And of course, a lot of people had been sent away to other states. The people that stayed here had lost everything, and they just wanted some kind of comfort. And their comfort was found in the foods that they were used to. People were worried that they would lose, you know, their grandmother's favorite recipe for stuffed mirlitons, or their grandfather's recipe for gumbo. When they started writing in, you know, we assumed that possibly most of the recipes had been published in the Times-Picayune, but there was certainly no guarantee that all of them had. So we had to go back through our archives and you know, some of them went back to the '50s and '60s. So some of these recipes were not, you know, recent ones.

NORRIS: Can we talk about some of the specific recipes in the book?

NORRIS: Do you mind?

NORRIS: And I understand that you have a copy of the book with you. So, can we go to page 240?

NORRIS: Because I want to talk about the maque chou.

NORRIS: Did I say it right?

Ms. BIENVENUE: Yes, you did.

NORRIS: And how did you decide to include this particular recipe?

Ms. BIENVENUE: Maque chou which has - it really, literally, French-translated, it means false cabbage, but it has nothing to do with cabbage. It's made with corn. Maque chou is traditionally made during the summer, when corn is in season, usually in Arcadiana and sometimes in New Orleans. The corn is scraped off the cob, you have this milky mixture that you cook with onions and butter and celery. And it's just a slow-cooked dish, and everybody is fond of it.

NORRIS: And it comes with this wonderful story on the first anniversary of Hurricane Katrina, a physician named Justin Lundgren(ph)...

NORRIS: ...Had a plan for what he called the lost tribe of New Orleans, people who were swept to so many places - to all sit down and at the same time, pick up their forks and tell the world that New Orleans was a very special place by all sitting down and having a sort of communal dinner - spread out across the country.

NORRIS: There's several recipes for crawfish. But there's one that was new to my eyes, crawfish stouffe(ph)? I've heard of etouffee but not crawfish stoufe.

Ms. BIENVENUE: OK. This was a dish that my mother started calling it a crawfish stouffe. Around our house, my mother said that if you made a roux, you had a stew. So the crawfish - her way of thinking - did not hold up well with a harsh brew. So she would cook the onions and bell pepper and celery and butter. Then she would add the crawfish, and when they would start to throw off a little juice of their own, she would add a slurry. So she called it like a stouffe because it didn't have that heavy taste of a roux. The slurry just pulled it together.

NORRIS: Now, what is a slurry?

Ms. BIENVENUE: A slurry is a combination of flour and water or sometimes corn starch and water. And it just helps to tighten up a dish.

Ms. BIENVENUE: Thickening agent. So we called it the stouffe.

Ms. BIENVENUE: That's correct. When we were young children, crawfish was not as popular as it was today. It was a poor man's food, and there was a particular place near the chapel arbason(ph) in Henderson, Louisiana, where - it was kind of like a big, old seafood house, and people would go there to have their fried catfish and then eventually, crawfish. And there was even a room that had a curtain. So if you went in there to eat your boiled crawfish and nobody could see you, because Mama said that if people that didn't know about our crawfish, eating boiled crawfish, they would think we were kind of strange. But now everybody eats them.

NORRIS: And now, they're on the cover of your cookbook.

NORRIS: What is the proper way to eat a crawfish?

Ms. BIENVENUE: A boiled crawfish, you pinch off the tail, then you suck the fat out of the body, then you have to squeeze the tail to open it up to get the tail meat out. Sounds pretty gross, doesn't it?

NORRIS: It sounds like an art, something that requires a little bit of practice.

Ms. BIENVENUE: But it's all good. It's very good.

NORRIS: And a great, big bib.

Ms. BIENVENUE: And a big bib, you're right.

NORRIS: Marcelle, it's been a pleasure to speak to you. All the best to you.

Ms. BIENVENUE: Thank you very much.

NORRIS: Marcelle Bienvenue is the co-editor of "Cooking Up A Storm: Recipes Lost and Found From The Times-Picayune Of New Orleans."