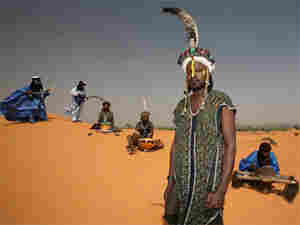 Etran Finatawa — translated as "the stars of tradition" — is a remarkable musical collaboration between members of two nomadic African cultures in Niger. Here, the band showcases an eclectic sound that features a variety of modern and traditional instrumentation, strong polyphonic voices and high tenor solos.

Formed by 10 musicians in 2004, Etran Finatawa was meant as a gesture of reconciliation and recognition of differences between the two sometimes-feuding groups, the Wodaabe and the Tuareg. Their music blends the two languages and distinctive styles with bluesy overtones, leading to their coinage of the term "nomad blues" to describe their music.

All aspects of Etran Finatawa's style are used to fuel their take on day-to-day life in sub-Saharan Africa: festivals, hardship and poverty, natural beauty and the therapeutic nature of music found in both cultures. All the while, the musical traditions of the two separate groups are impressively blended.

The group's latest release, Desert Crossroads, is no exception. The band is touring the world in support of the album, with stops in North America and Europe.