Accessibility links
The AccoLade: Saudi Women Rock Out The conservative Islamic kingdom of Saudi Arabia is hardly a place to hear about up-and-coming rock bands, let alone an all-female one. The AccoLade has gained an international following via Facebook and MySpace. The band talks about attracting attention from religious clerics, as well as how creating a somewhat anonymous identity online lets the band thrive in a strict society. 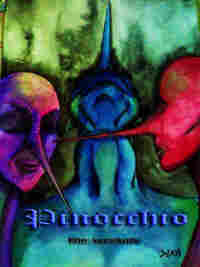 Each member of The AccoLade likes to draw and paint. The band's first single, "Pinocchio," started with this painting of three eerie, bald-headed figures with long noses. Courtesy of the artist hide caption 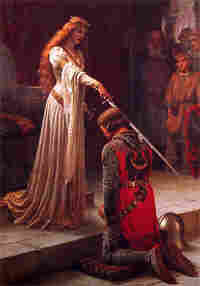 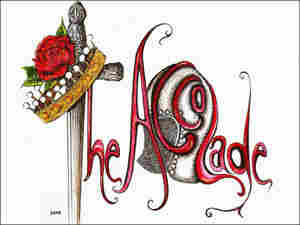 The AccoLade, an all-female rock group from Saudi Arabia, has gained worldwide fame after posting songs on Facebook and Myspace. Courtesy of the artist hide caption

The conservative Islamic kingdom of Saudi Arabia is hardly a place where you'd expect to hear about up-and-coming rock bands. But more and more new groups are cropping up, recording in the privacy of their homes and gaining notoriety by posting songs on Facebook and MySpace.

The latest phenomenon, The AccoLade, is one of the country's first all-female rock bands. During the day, its members attend the all-female university in Jeddah, and at night they get together and jam.

The attention started when the group recorded its first single and posted it on a social networking site.

"We just downloaded our song in Facebook, and we got fans — Saudi fans, actually, first — and they really loved our song so much and support us so much," says Dina, the band's guitarist. "Then the fans become international."

The band names the countries their fans represent: America, Europe, India, Turkey, Iran. "That really makes us want to do more and more music," Dina says.

Being female means playing by the rules in Saudi Arabia. That way, the women say, they won't attract attention from religious clerics.

"We don't want [to] make big deal of something," Dina says. "We just want to play music. Play something we love only. And we don't look for more."

The band's look is a mix of skinny jeans, Chuck Taylors, teased hair, piercings and lots of eyeliner, but you won't see much of this in public or on the Internet. Outside the house or the university, the women cover their hair and wear long black robes called abayas.

Still, some conservative Saudis have written to online forums, saying the band is immoral; the women say they've done nothing wrong.

The AccoLade's members don't use their family names or post videos or photos on the Internet. In fact, the band says, cultivating a modest and somewhat anonymous identity online lets them thrive in this strict society.

"We are lucky to have each other, you know?" says a singer in the band, who requested that she not be named in this story. "The generation that we're living in — we are lucky to share a same dream."

The band got its name from an Edmund Leighton painting titled "The Accolade." Lamia, another singer, describes the scene in the painting.

"A princess holding a sword," she says. "She's knighting the sword to a guy. To be a hero. To be like more a gladiator or something."

Dina and Lamia both say they are still waiting to meet their heroes.