Accessibility links
'The Day The Earth Stood Still': Interstellar Inertia It's time, not the planet, that seems to halt for a big chunk of Scott Derrickson's expensively produced but utterly boneheaded remake. Sure, the effects are special — but you can see those free on the Web. 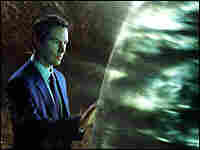 Intergalactic Enforcer: Keanu Reeves' Klaatu is from the offworld government, and he's not here to help you. hide caption 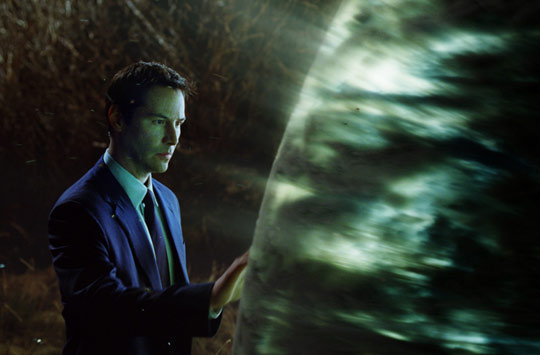 Intergalactic Enforcer: Keanu Reeves' Klaatu is from the offworld government, and he's not here to help you.

The Day The Earth Stood Still

Rated PG-13 for some sci-fi disaster images of the destruction of the entire world. 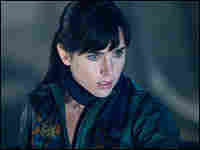 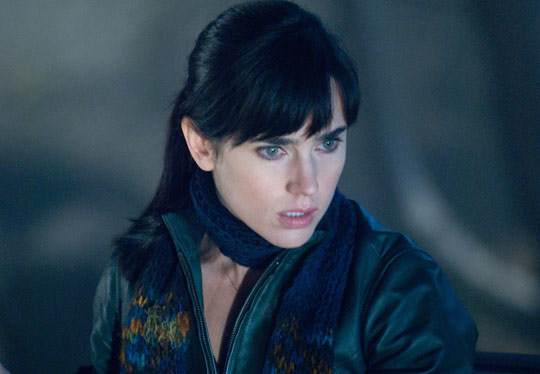 Klaatu Barada Nikto: Helen Benson (Jennifer Connelly) has to convince Klaatu that the people of Earth are worth keeping.

Dunno about the Earth, but time certainly stands still for a goodly portion of Scott Derrickson's expensively produced but utterly boneheaded remake of The Day the Earth Stood Still; the film is well under two hours long, but the experience of watching it seems to go on until the end of days.

The original was a '50s-era cautionary tale about atomic weapons; this one's just someone's idea of a joke on the phrase "little green men" — "green" in the distinctly post-'50s sense of "environmentally concerned."

Sci-fi fans will remember that last time around, the alien Klaatu, representing a sort of intergalactic U.N., popped by in a flying saucer to warn that humankind, having split the atom, needed to learn to live in peace — or risk being exterminated before it could harness the atom for space travel and offload its planetary aggression.

This time, Klaatu (Keanu Reeves, otherworldly as ever) is from a sort of intergalactic EPA, concerned about the habitat of one of the universe's few life-supporting planets. A reasonable trade, I suppose, though the filmmakers don't do much with the conceit. They do, however, mess with subtext in ways that sound cleverer than they play.

In place of the first version's New Testament subtext — in 1951, Klaatu wandered the earth using the name Carpenter, died, came back to life, gave a nifty speech about living in peace, and rose heavenward — the screenwriters have here turned to the Old Testament.

Glowing orbs float to Earth, where they attract animals of all sorts, which leads someone to call them "arks" and to wonder what comes next. "A flood," suggests hard-bitten Defense Secretary Kathy Bates — guessing incorrectly, as it turns out.

What the screenwriters actually send her way is a plague of metal locusts, hungry for anything man-made — presumably foretold in that infrequently-quoted passage of the Book of Exodus in which the Lord calls for the smiting of sports stadiums and big trucks.

Keanu, er, Klaatu, has the good sense to run under an overpass (which must not be man-made, because the locusts ignore it), but Shea Stadium and a racing tractor-trailer have by that time disintegrated digitally in a very brief flurry of reasonably cool special effects that are the only conceivable reason for attending The Day The Earth Stood Still.

And which you can see very nearly in their entirety for free — and even make them, um, stand still, by pushing pause — in the movie's trailers on the Web.