Accessibility links
Aimee Mann's Off-The-Wall Christmas Concert Singer-songwriter Aimee Mann doesn't seem like the type to gravitate toward Christmas music. But for the third year in a row, she brought her off-the-wall Christmas variety show to the Keswick Theater in Glenside, Penn. The night included guests Nellie McKay, Amos Lee, Grant-Lee Phillips and many more.

See a list of upcoming concerts and add them to your calendar. hide caption

Advisory: Language and subject matter not suitable for all ages. 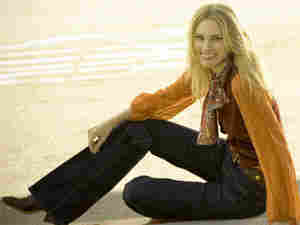 Aimee Mann doesn't seem like the type to gravitate toward Christmas music — there's nothing Bing Crosby or Mannheim Steamroller about her. Yet for the third year in a row, she brought her off-the-wall Christmas variety show to the Keswick Theater in Glenside, Penn. The concert was webcast live by WXPN on Saturday, Dec. 13.

Joined onstage by Nellie McKay , Grant-Lee Phillips and comedian Paul F. Tompkins, Mann and friends played campy Christmas favorites from old television specials (complete with character voices on "You're a Mean One, Mr. Grinch"), material off her 2006 album One More Drifter in the Snow as well as original songs.

A video of A Christmas Carol framed the evening, but it was re-imagined in the bizarre humor of Tim Heidecker, one-half of the Adult Swim comedy show, Tim and Eric Awesome Show, Good Show! Mann was visited by the ghosts of Christmas concerts Past, Present and Future, featuring the talents of Michael Cera (Arrested Development, Superbad) and others.

The videos only added to the John Waters-esque vibe of the whole evening. It was a not-so-family-friendly Christmas carnival that at one point starred Grant-Lee Phillips as Willie Nelson offering Mann a "Jamaican maple leaf." The two sang "Voices Carry," riffing on Mann's old band, 'Til Tuesday. Comedian Morgan Murphy also interrupted the concert as The Hanukah Fairy, drunkenly rapping the history of the holiday.

But not all of it was silly. Philadelphia native Amos Lee dropped in to join Mann on "Winter Wonderland." The two hadn't rehearsed the song, but Mann said, "Christmas is magic and magic makes [expletive] happen." And in keeping with the demented spirit of the evening, Lee stayed on to play John Prine's "Christmas in Prison."

In the end, Aimee Mann's Third Annual Christmas Concert was just as honest and bewildering as her own music. Mann does love Christmas music, once saying that it has a "spooky beauty and mystery" to her, a quality she no doubt achieved at the Keswick Theater.