Accessibility links
Why Conservatives Shouldn't Be Cheery Weekly Standard writer Matthew Continetti says his conservative friends have been filled with glee during this holiday season, savoring recent GOP victories and reveling in Democratic scandals. But it is far too early for them to break out the eggnog. The GOP remains in serious trouble.

Why Conservatives Shouldn't Be Cheery

Why Conservatives Shouldn't Be Cheery 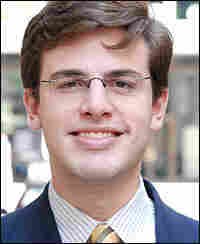 My conservative friends have been filled with glee during this holiday season, savoring recent GOP victories and reveling in Democratic scandals. But it is far too early for them to break out the eggnog. The GOP remains in serious trouble.

The first good news for Republicans was U.S. Sen. Saxby Chambliss' victory in a Dec. 2 runoff election. Chambliss beat his Democratic opponent, Jim Martin, by a whopping 15 points. He increased his share of the vote from 48.9 percent on Nov. 4 to 57 percent in the runoff. His victory guaranteed that the Democrats would not have a filibuster-proof majority in the Senate. And many conservatives were cheered when they saw Alaska Gov. Sarah Palin draw huge crowds at Chambliss' campaign events.

Then came Republican Anh "Joseph" Cao's victory in a special election in Louisiana on Dec. 6. Cao's opponent was the indicted Democratic Congressman William "Cold Cash" Jefferson — the guy who allegedly hid $90,000 in his freezer. Cao won in a majority-minority district where John McCain got less than a quarter of the vote. And Cao will become the first Vietnamese-American congressman, helping to diversify the GOP.

Meanwhile, Sen. Norm Coleman may yet triumph in the recount between him and Democrat Al Franken. You open the paper and read about the arrest of Democratic Illinios Gov. Rod Blagojevich, and the news, if you are a Republican, just keeps getting better. The GOP's dismal electoral fortunes may turn around sooner than people think.

Except that they won't. Consider the circumstances surrounding the recent Republican victories. Both Chambliss and Cao won in the South, where the Republicans have been strong for decades. And while Cao's district may not seem like friendly territory for a Republican, one has to remember that Jefferson was becoming an embarrassment to his constituents. People might not like Republicans these days, but they like corruption even less. As for Coleman, the Senate contest in Minnesota was pretty much a tie. No big victory there.

The GOP's overall situation remains poor. Barack Obama won an impressive victory in November, and the Republicans are unlikely to take back Congress anytime soon. What's more, the share of voters who identified as Republicans on Election Day was the lowest it has been in more than 20 years. And Obama won lopsided victories among groups that will only play a larger role in our politics as time goes on — young people, for example, whom Obama won by a 2-1 margin. And Latinos, whom Obama won by a similar margin. The only age group that went for McCain was 65 and older. That's not what you would call a good sign for the Republicans' long-term future.

Obama is popular, and his agenda is, too. A recent poll found that 60 percent of respondents support Obama's plans for massive infrastructure spending. Voters may be split on whether or not to bail out the Big Three auto companies. But they will not like Republicans anymore — trust me on this — if the GOP drives those companies into bankruptcy and is indirectly responsible for massive layoffs.

The GOP's problem is that it obstinately refuses to address the problems facing those Americans who do not listen to conservative talk radio. Also, the party is tied to the legacy of the most unpopular president since the advent of polling. Democrats were able to invoke Herbert Hoover's legacy for decades. How long will they be able to invoke George W. Bush's?

Matthew Continetti is associate editor of The Weekly Standard and author of The K Street Gang: The Rise and Fall of the Republican Machine.