Dave Samuels and Pete Escovedo
• 'Angels We Have Heard on High' 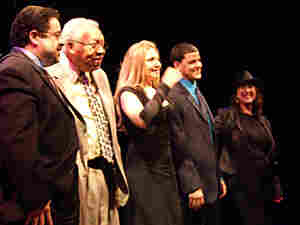 And, from another coast of the Afro-Caribbean musical spectrum, New Orleans musical ambassador Ellis Marsalis performs his own holiday cuts. All take a turn interpreting favorite selections from an ever-expanding holiday songbook, live from the John F. Kennedy Center in Washington, D.C.

The celebrations begin with a moment originally broadcast on 2005's Jazz Piano Christmas — one which also rang in the season with an Afro-Latin rhythm. Grammy-winning vibraphonist Dave Samuels (playing the marimba) was joined by percussionist Pete Escovedo for a delicate duet rendition of "Angels We Have Heard on High."

From there, it's on to the main event. Arturo O'Farrill, son of the pioneering Latin jazz bandleader Chico O'Farrill, took the stage first. Like his father, he too leads a powerful orchestra — but here, he stepped up to the piano by himself. He dusts off an upbeat reading of a holiday classic in "O Tannenbaum," and asks that we "Abreme la Puerta" (Open the Door) for some Puerto Rican-style caroling.

Next up: a Venezuelan Christmas ditty by way of New York City. The winner of a scholarship set up by Tito Puente, Angel Echevarria studies Latin music at the Harbor Conservatory in East Harlem. He took on the children's song "Mi Burrito Sabanero," with a kaleidoscopic display of several different styles.

Northern California's Rebeca Mauleon is a triple threat. As an educator, she's written instruction books for playing Latin jazz piano. As a bandleader, she can turn a group of musicians who never played together before into a swinging band in days. And as a performer, she's worked with both Latin music legends (Israel "Cachao" Lopez, Tito Puente) and actual rock stars (Carlos Santana, Grateful Dead drummer Mickey Hart). Here, Mauleon plays an Ernesto Lecuona classic and flips her own version of Vince Guaraldi's "Linus and Lucy" (from A Charlie Brown Christmas).

Twenty years ago, Brazilian pianist Eliane Elias was named Best New Talent by Jazziz magazine. She's lived up to that distinction and much more: Her two new albums in 2008 were among the most popular entries on jazz charts this year. She performs "I'll Be Home for Christmas," spliced together with a Bill Evans tune, and then invites Evans' last bassist (Marc Johnson) to join in on "Sleigh Ride."

From the pulse of Brazilian bossa nova to New Orleans swing: For more than five decades, Ellis Marsalis has taught and performed in the Big Easy. His sons Branford and Wynton may be his most powerful legacy, but his influence spreads far beyond his family and hometown. Running out of holiday repertoire, he joked that he might just leave the crowd with a "Silent Night."